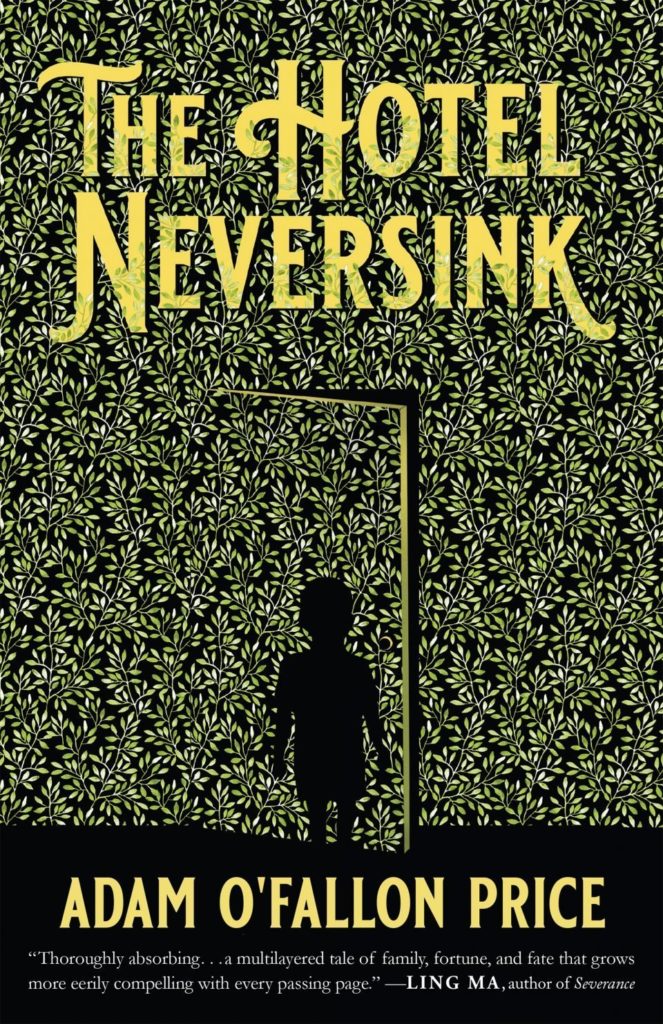 The following is a chapter from Adam O'Fallon Price's novel, The Hotel Neversink from Tin House Books. Adam O'Fallon Price's short fiction has been published in Harper's Magazine, The Paris Review, VICE, and elsewhere. His essays and reviews appear in venues such as Electric Literature, the Paris Review Daily, Ploughshares, and The Millions, where he is a staff writer. His first novel, The Grand Tour, was published in 2016. He lives in Carrboro, NC.

The other day, I had the strangest feeling I was being watched. Jean had already gone over to the Neversink to eat an early breakfast before overseeing a new construction project in the north wing. I was getting dressed, putting on my tie, and all the hairs on the back of my neck stood up. I felt it before I noticed it—like realizing a drafty window has been chilling a room long after your hands have already grown cold. There was—had been—someone behind me, I was sure of it.

I turned and there was nothing, just the door and Jeanie’s vanity beside it. But as I ate breakfast and read the paper, the feeling remained, like the lingering odor of the food I’d prepared, something just on the edge of detection. In my office, balancing some old ledgers, there was a scratching at the window across the room—the kind of noise I would normally, without even thinking about it, ascribe to a stray branch rubbing against the glass, perhaps caused by the movement of a chipmunk or an unseen bird. But on this day, I had a horrible vision, strange to describe even after the fact, but so powerful that it made my heart dance a double mazurka in my chest. It was this: a figure hanging beneath the window on some ledge or other, scratching his nails against the bottom of the glass.

This idea was so strong, the image so vivid, that I went outside to check, but of course there was nothing. I stood there on the sloping green, heart pounding, and my thoughts turned uncontrollably toward Jean’s brother Joey—Joey Shvetz, the name he took to distance himself from the family—whom I’d watched disintegrate on the main stage, and who’d subsequently been hospitalized again. It had been a terrible thing to behold, this clever man whose faculties were failing him. To never be able to trust one’s mind—worse, to regard oneself as a foe that, without constant monitoring, might do you harm—I could think of few worse things.

To steady my nerves, I strolled around the grounds, saying hello to various employees—Michael doing some landscaping, Sander Levin carrying in boxes of bar supplies—and a few young guests tossing around a football. It was a blustery fall day, the kind with the bright sun of late summer, but with a hint of winter on the breeze; the kind of day one likes to appreciate around here, before the cold really settles in and warmth exists only as a memory and promise. I found Jeanie where I’d thought she would be, talking to workmen beside the new construction. I did not tell her about my disquiet, but as I kissed her goodbye, I felt the scaffolding and its intricate hollows and shadows suspended overhead like an enormous skeleton.

The rest of the working day passed in a strange haze. I could not get the numbers to properly resolve—money was going to mysterious places, some project I hadn’t been informed of, though what else was new? My mind was dull, my thoughts like peering through clouded glass. At five, I gave up and went downstairs, ready to take a glass of wine with Sander down at the bar, when from the staircase window I saw a child run across the purplish shadows of the north lawn, directly into the woods.

I ran, too, not stopping to explain myself to the wide-eyed maid, even to remove my jacket. Of course, I was thinking of the missing children around town, especially the child that had vanished here so many years before. Jonah: the months of vain questions and searching that followed, the years of sorrow—especially for Jeanie—every time his name was mentioned by a guest or newspaper article. At times, I felt—though I never would have said so—it was as if he’d never disappeared at all.

Across the grass I dashed, down the hill, feeling the way the child had looked, as though he were helplessly falling into the trees. At the tree line I snagged my foot on a grasping root and fell hard, nearly dashing out my brains on a tree stump only inches away. I rose, dirty and disheveled, my wrist in considerable pain, although I could barely feel it, so frightened I was for the child who had entered this dark realm before me, of whom there was now no trace. There were only the trees, a blanket of wet leaves, skittering animals, and the ragged feel of my voice in my throat as I stumbled forward calling hello, hello? Little boy? Hello! The farther into the forest I moved, the louder my shouts became.

Of course, I was thinking of the missing children around town, especially the child that had vanished here so many years before.

In a dark copse, I stopped to catch my breath. I was surrounded by several very old, large trees, and a pervasive smell of earthy decay. As I paused, hands on knees, listening for the child, I became aware of a sickly yellow light that seemed to be coming from the trees, from the darkness, from myself. Once more I ran, though not now in pursuit but escape, escaping a presence that was just behind me, a mere fingertip away.

I don’t know how long I ran through those woods, but at a certain point, I became aware of another voice calling from a distance. It was, I realized, Jeanie. The indigo sky permitted me just enough light to make my way back through the tree line, where I found three workmen and my wife, holding a lantern.

“No, one of the workers saw you go in. What were you thinking?”

I explained what I’d seen, described the little boy as best I could: small, fragile, dark hair flying behind him. But when a report was sent through the hotel, no word came back of any missing child. And the next morning, over tea, a local policeman—Chief Bates, a mere officer when he’d helped with Jonah—assured Jeanie and Mr. Javits and me that no alerts had been filed, either in Liberty or any of the surrounding towns.

When the policeman left, Javits stretched and said, “Well, I guess that’s that.”

“So, he sees a boy,” said Javits to Jeanie. “Maybe he does, maybe he doesn’t. The eye can play funny tricks that time of day. And anyway, if there was a boy, he went back home, so there’s no problem in the end.”

Eager, I knew, to get on with a hard day of reading the sports section and napping, Javits rose, taking his teacup with him up the stairs to his office. Jeanie sat with me after he left, looking at me strangely.

“What happened?” she said.

“There was no child.”

“How to explain it?”

Months later, I still do not. Unbeknownst to Jeanie, I met several times with an Albany psychologist, but he offered no answers. Perhaps there are no answers. Or perhaps there are, and it is as with the man I still feel standing behind me sometimes. It is not that I sense him too late. It is that I know better than to turn around before he is gone.

Excerpted from The Hotel Neversink by Adam O’Fallon Price. Used with permission of Tin House Books.

127 years after his death, letters of love and angst still come to Rimbaud's grave. 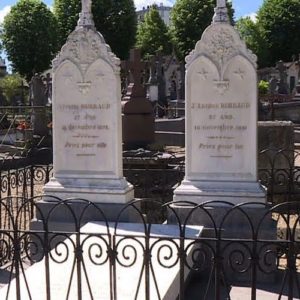 127 years after his death, letters of love and angst still come to Rimbaud's grave. I've always loved the tradition of trekking to a beloved author's grave and leaving gifts for them (and future visitors)...
© LitHub
Back to top