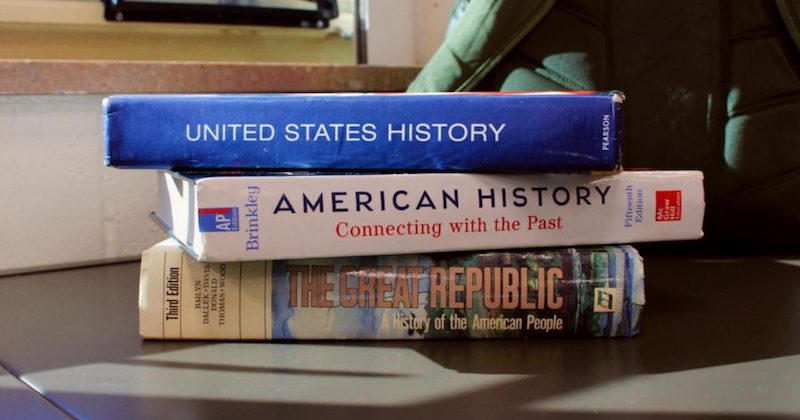 Textbooks are how most of us learn history, and the stakes are high for what is in them. In “Southern History,” poet Natasha Trethewey describes a textbook she learned from as a schoolchild in the early 1970s in Mississippi:

Before the war, they were happy, he said,
quoting our textbook. (This was senior-year

history class.) The slaves were clothed, fed,
and better off under a master’s care.

I watched the words blur on the page. No one
raised a hand, disagreed. Not even me.

It was late; we still had Reconstruction
to cover before the test, and — luckily —

three hours of watching Gone with the Wind.
History, the teacher said, of the old South —

a true account of how things were back then.
On screen a slave stood big as life: big mouth,

bucked eyes, our textbook’s grinning proof — a lie
my teacher guarded. Silent, so did I.

The child feels guilty for not rising to address the racism. “The slaves were clothed, fed, and better off under a master’s care,” the textbook read, and the Black child feels she is the one to fix it, even though she is not.

Assuming that parents across race believe that if their children have better textbooks and better teachers— especially in their civics and history courses—they would grow up to be better citizens, the textbook itself is an instrument for this logic. This is a tale of two textbooks by the great historian John Hope Franklin: the iconic From Slavery to Freedom and his lesser-known Land of the Free.

Looking closely at the labor and context of writing both mainstream American history and Black history underscores the animating impetus and corrective imperative for writing American history across the 20th and into the 21st century.

Franklin’s From Slavery to Freedom is not the first textbook of Black history—for example, Carter G. Woodson’s The Negro in Our History was in its sixth edition in 1932, and Benjamin Brawley’s A Short History of the American Negro was also in classroom use in the early 1930s. But From Slavery to Freedom—in print since 1947—is the perennial text in the canon of the long Black studies movement. With Franklin’s Land of the Free, we better understand the stakes of telling history and what can happen when a Black scholar dares to step outside of strictly “Negro” subject matter and recalibrate, in this instance, American history.

Franklin wrote Land of the Free in 1966 with two other historians, John W. Caughey of UCLA and Ernest R. May of Harvard. They submitted it for adoption as the sole eighth-grade history textbook in the state of California. In 1962 the state had mandated that history be taught more inclusively and, in 1964, that textbooks must provide a “correct portrayal” of African Americans and “other ethnic groups.” Land of the Free, if adopted, would be used by approximately 450,000 eighth-grade pupils each year.

When the manuscript was submitted to a panel of state historians for review, it immediately became the target of a right-wing book-banning campaign. The book was criticized as being “slanted in the direction of civil rights . . . with high praise for militant groups and condemnation for the great majority” and designed to both “build up a segment of the country at the expense of the rest of the country” and “instill a guilt complex” on white students. Critics complained that, if African Americans were to be discussed, athletic heroes like Jackie Robinson were acceptable—but not intellectuals such as Du Bois.

A well-funded group called the Land of the Free Committee made a twenty-two-minute filmstrip called Education or Indoctrination? and used an image of Franklin’s face with The Communist Manifesto read out as a voice-over afterward. The committee said the book “destroys pride in America’s past, develops a guilt complex, mocks American justice, indoctrinates toward communism, is hostile to religious concepts, overemphasizes Negro participation in American history, projects negative thought models, criticizes business and free enterprise, plays politics, foments class hatred, slants and distorts facts, [and] promotes propaganda and poppycock.” 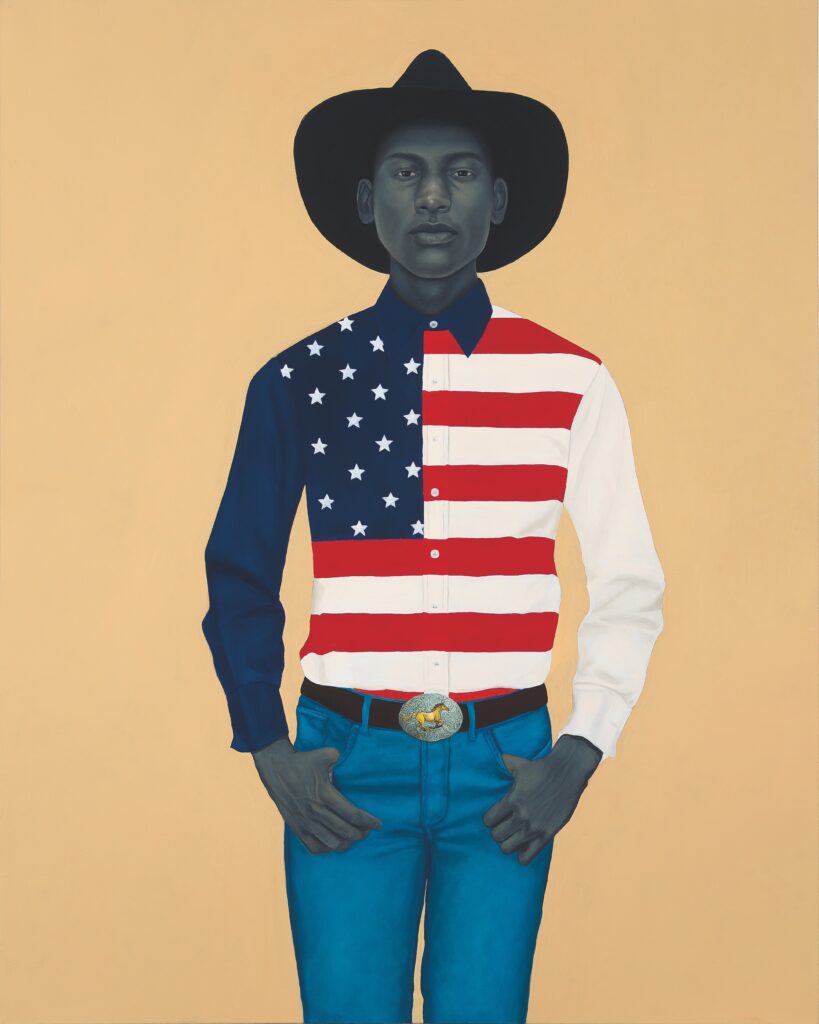 Amy Sherald, What’s precious inside of him does not care to be known by the mind in ways that diminish its presence (All American), 2017 © Amy Sherald. Courtesy the artist and Hauser & Wirth.

Ultimately the book itself prevailed. It was modified without evisceration and resubmitted, then finally declared acceptable and adopted for mandatory use in California’s eighth-grade classrooms. Nonetheless, many California radio shows for months after continued to devote hours of talk to the topic, the Pasadena filmstrip continued to be shown and debated (without acknowledgment of changes that had been made to the book), and some local school boards continued to resist using the textbook.

Most threatening in Land of the Free was not the narrative of the contributions of people of color but rather African American studies’ sharpest tool: the critical consciousness that allows us to question the dominance of one social group over another and solely triumphal versions of any text or history. Is the American central narrative of upward mobility and the power of positive thinking much more than a shroud for a frank assessment of the past and its ongoing unresolved inequities?

We see this very issue playing out now with the deliberate distortions and manufactured fear surrounding critical race theory, the school of thought and systemic thinking that began in the legal academy with scholars Derrick Bell, Kimberlé Crenshaw, and Richard Delgado. These questions and methodologies were also developed by culture scholars and historians in African American studies. Critical race theory provides tools helpful for understanding that race is a social category and not a biological fact and that racism is best understood systemically rather than instance by instance.

I want to return to the legacy of John Hope Franklin and the contributions of his work in the academy to the larger racial conversation. The latest editions of Franklin’s From Slavery to Freedom were prepared by historian and former chair of the African American Studies Department at Harvard Evelyn Brooks Higginbotham, who completed the work at Franklin’s request before he died.

The book came out in 2009 with the first African American president, Barack Obama, on the cover. In this image Obama, depicted in color, faces a black-and-white photograph of the Negro in bondage, visually marking the distance “from slavery to freedom.” The American flag is the background, its symbolic glory and possibility restored. The scholar—Dr. Franklin—who researched part of the book from behind a screen erected to segregate Black and white researchers from each other at the Library of Congress has moved from margin to center. The triumphal version of American history Franklin was chided for eschewing when he told the truth about American history in Land of the Free now dominates. African American history has been visually moved to the center, in the person of the first Black president.

It is African American studies as a discipline that teaches me to resist simply cheering this cover, which might suggest that the first Black president is the end point of a history. Certainly we know that there is no triumphal end; the Trump presidency made that once again piercingly clear to us. So I take interest in the fact that Obama’s back is turned in the chosen image and his face cannot be seen. We are not, as viewers, given the satisfaction of smiling back at a smiling Obama or the populace he addresses in the picture. The crowd’s gaze is skeptical, direct. The historical Negro will not be charmed nor cheered by the triumphal present. Attempting to see things as they really are with the unflinching critical eye is, at the end of the day, the way Black people have strategized and survived. The will to the triumphal is understandable in all peoples who have suffered more than their share of oppressions.

But the lesson of African American studies is that the call to the triumphal is a siren song. I hope that the ways in which the humanities move along the racial conversation in this country—thorny, difficult, unsettled—will help us think in terms of process rather than finish line and leave us ever more open to the complexities that the humanities and the arts can reveal to us. As much as the election of Obama was a moment to celebrate, I don’t see it as conclusive but rather as one more step forward along a very long road. Even symbolic freedom is, in part, unknowable.

In Tony Kushner’s theater masterpiece Angels in America, the Black nurse Belize pithily describes some of our national ironies. “The white cracker who wrote the National Anthem knew what he was doing. He set the word ‘free’ to a note so high nobody can reach it.” So many continue to fight for universal freedom. The historians and artists envision it. The advocates and protesters put their bodies on the line for it. But we aren’t there yet. 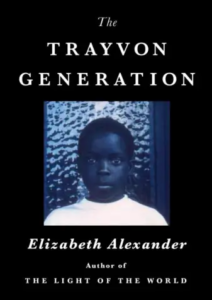 Elizabeth Alexander is a celebrated poet, essayist, and scholar. She is the author of more than a dozen books, including six volumes of poetry. 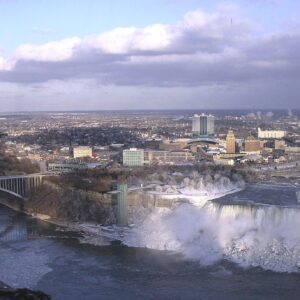 It was a Sunday afternoon, almost summer in Niagara Falls, and the children from the little bungalows on the east side of town...
© LitHub
Back to top
Loading Comments...