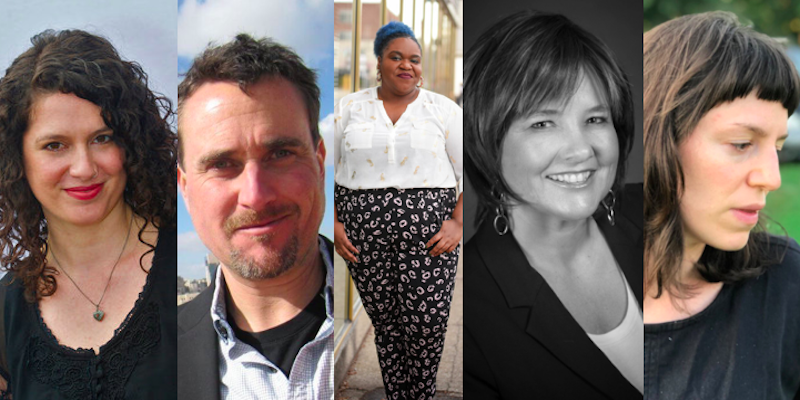 Dawn Winter: A woman, a debt, and the the beginning of the end, brought about by a banana.

Zachary Lazar: It’s a love story during the time of Trump that is also a post-Obama, post-post-racial, post-hope story, where New York and Caracas meet in the middle, in Mexico City, and there is something like new hope but it’s in another language, Spanish, esperanza. For a while I was going to call the book Esperanto, but nobody got it.

Rachel Mannheimer: Sculpture and performance and land art. Climate catastrophe and genocide. Grief, love, collaboration. Moving through the world with others. Continuing.

Negesti Kaudo: When I was in graduate school in Chicago, I wore headphones 85% of the time. The soundtrack of my early 20s is defined by a lot of pop music, r&b and hip-hop — and it turns out that a lot of those same themes have been written about since the 1890s, so there’s some sort of translation of eras when it comes to influence. Also, there’s just not enough writing about Black women in existence, even though a lot of Black women have written about their experiences in literature, music, film and television. My collection is paying homage, but it’s also still learning.

Zachary Lazar: Donald Trump, turning 50, classic Russian and Japanese fiction, a desire to write something freer and less controlled, an abandoning of self, forward movement, Blue Note records from the early 60s, memories of my golden youth.

Rachel Mannheimer: Artists of the 1960s and 70s, Alaska in the 80s and 90s, overheard conversations, encounters with wildlife, museum wall texts and other interpretive signs, cemeteries, roadside trash, relationships past and present.

Dawn Winter: Connection creates influence, and connection is everywhere. So, people (loved ones, old ones, dead ones, anyone) and nature, and memories, and dreams. Then everyday life feeds into it, with all it’s wonderful oddness.

Lisa Bird-Wilson: Probably Ruby is influenced by decolonial thinking, Indigenous understandings about kinship, ancestors and relationships, and the importance of imagination and how we all build and rebuild our own narratives. The book is character-driven and I was influenced by the desire to humanize Indigenous experiences under colonialism within one engaging, high-spirited, contemporary character: Ruby.

Zachary Lazar: Donald Trump. Turning 50. Depression and despair. Extreme wonder regarding the natural world. Friends from all different walks of life who all had fiercely different views of what was going on. James Baldwin’s No Name In The Street—reading that book and feeling like it had been written “yesterday” (I snuck in an author’s name through the back door).

Zachary Lazar: I’m always “shining a light into the darkness.” Obviously it could be worse, I could be “darkening the light with dimness.”

Dawn Winter: The words, “It’s too dark,” have been fed back to me so many times over the years, it’s a wonder comedy appeared in my writing at all. Most of the time, I wanted to scream.

Negesti Kaudo: “Books about White race,” “the whites” … any mention of white people and/or men that takes away from the authenticity of my book being about *my* life as a Black woman. Am I offering a perspective to “challenge white supremacy” as Kirkus says? Yes, but my book is not about that.

Lisa Bird-Wilson: Reviewers have been kind to Ruby and some have been exceptional in their understanding of what Ruby embodies, as a character—her vulnerability combined with her audacity and humor. Those who don’t get Ruby use words like trauma, raw, victim, and so on, but Ruby is so much more than the usual trauma tropes.

Rachel Mannheimer: I have yet to be described!

Lisa Bird-Wilson: I always thought I should be a lawyer because I’m good at arguing. That’s probably not what it’s like to be a lawyer.

Negesti Kaudo: I’d either be a professional chef or a neuroscientist. Cooking is very similar to art / writing for me, so I’m not sure if that counts as a career besides writing.

Negesti Kaudo: Unflinching honesty is my strong suit, which I use to make readers uncomfortable (also another strong suit). Craft-wise, I’d like to be able to write a paragraph-length sentence that’s grammatically correct and impactful, just like Renee Gladman.

Dawn Winter: I love a punchy metaphor and think I’m pretty good at them. I sometimes need to know when to stop (describing, elaborating, editing, overthinking, listing…just like I’m doing here…)

Rachel Mannheimer: I like to think I’m good at description. I have a limited imagination.

Lisa Bird-Wilson: Strong: Character development. Having my characters do interesting or contrary things. Plus I don’t give up easily. I’m not kidding, that’s an important part of being a writer—stick-with-it-ness.  Improve: I can always improve my writing—I regularly take workshops on craft and read books about grammar and other aspects of improving my writing. Also, writing better sentences, one at a time—I could definitely be more attentive to this.

Zachary Lazar: I’m a sentence person.  All I think about is plot, plot, plot. Story, story, story. The sentences are going to be there (until they’re not) but imagining a compelling story is work for me. I’m better at it than I used to be, but I would like to be even better.  I’m good at characterization and getting better at dialogue, but these things can’t be forced, there’s luck involved because they depend very much on surprise.

Rachel Mannheimer: I aim to be more companion than expert—like we’re in the car together and I’m making conversation, pointing out interesting things as we pass. A book can’t be an actual conversation, but… I guess that’s the hope, that the reader will be curious, have questions, be reminded of people and events from their own lives, enjoy their own interesting thoughts in response!

Dawn Winter: “Your karma is your dharma.” The hand that fate dealt you can always be used to some good. If my writing can make one person smile, or feel less alone, well, that’s the point.

Zachary Lazar: It seems like a sort of hostile question. Like if I was a saxophone player or if I made pottery, no one would say anything about hubris, they would say, “oh I guess he gets something out of it,” or maybe, “he’s not very good at that, I wonder why he does it so much,” or, “I actually think he’s pretty good, I hope he keeps it up.” But I get it, asking someone to read a book is like giving them homework. All I can say is that it won’t feel like homework if you read my books.  My books are really fun to read because once I spent 10 years writing a 600-page novel that never got published and I learned my lesson.

Negesti Kaudo: I’ve been through enough hostile workshop environments to understand that there are a lot of people who don’t care what I have to say, and good for them. Most of the time, I don’t think anyone is really interested, but I like reading my own shit and it turns out a lot of other people do too. I don’t really think it’s hubris, being a writer and believing or knowing that I’m good at what I do…but I’m also a double Leo (sun/rising), so ego is both a pro and con of my personality.

Lisa Bird-Wilson: In light of recent discoveries of unmarked graves at the site of former Indian Residential Schools, reading books by and about Indigenous people gains a greater urgency. To be Indigenous in this land is to have residential school history, assimilationist and destructive government policies, in your past, passed along by your family and impacting you today. If we want to understand one another, if we want to understand ourselves, we need to read each other’s stories.

Nature Writing is Survival Writing: On Rethinking a Genre 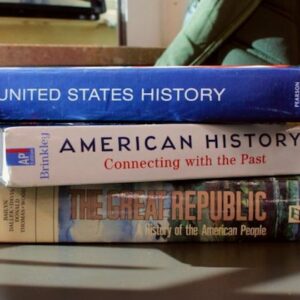 Textbooks are how most of us learn history, and the stakes are high for what is in them. In “Southern History,” poet...
© LitHub
Back to top