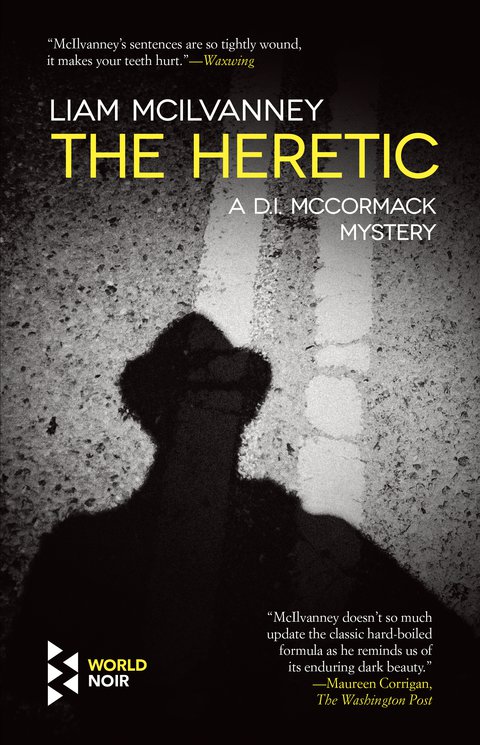 The following is excerpted from Liam McIlvanney's new novel The Heretic. Liam McIlvanney is the winner of the Saltire First Book Award and the Ngaio Marsh Award for Best Crime Novel. He is a regular contributor to publications including the London Review of Books, Times Literary Supplement, and The Guardian. He is Stuart Professor of Scottish Studies at the University of Otago, New Zealand, where he lives with his wife and four sons.

She wakes in the night knowing something is wrong. Up on one elbow, straining to hear. She turns her head to check on the girl. The girl has kicked off her covers on her side of the bed, lies sprawled in her shorts and grubby white vest. Denise reaches over to place a palm on her daughter’s head and the heat makes her gasp. Has the girl caught a fever? She lays the backs of her fingers against the girl’s cheek—burny, rough—and blows on the sleeping face, rotating her head to let the breeze play over forehead, eyes, nose, cheeks, chin. The girl stirs, flips her head to face the window.

For weeks now the city’s been a sweat box. That’s the trouble with these old tenements: can’t heat them in winter, can’t cool them in summer.

Denise flops back and stares at the ceiling. She wonders what snapped her awake. Sometimes the young team go on sprees late at night, smashing the windows of derelict flats. You hear their laughter, pounding feet, cheers going up when the glass shatters. Her own building is mostly empty. Just herself and wee Kirsty up here and old Mr Stewart on the floor below. But all the breakable panes have been smashed and anyway she’s out of easy stone-throwing range up here on the fourth floor where her white net curtains—her flag of truce—and a wilted aspidistra on the windowsill testify that somebody lives here.

There is a noise, now that she’s properly awake, but it’s not the hard laughter of youths, nor the drunken singing of the old jakeys who sometimes set up camp in one of the empty flats. It’s a soft noise, but strong too, a kind of gentle roaring, like a river in spate or like a wind has got up and is buffeting the building. A summer storm?

And now she registers what’s been troubling her all along. It’s too bright. There’s an odd glare, as though the sun has decided to rise in the night. Drawing back the covers she steps out of bed and now she gasps again. The floor. The wooden floorboards are hot, they actually sting the soles of her feet like the planks of a sauna. There is no way to make sense of this and so she tiptoes to the curtains and pauses. Then she jerks them apart.

The whole world is orange and black and yellow and crackling. The warehouse next door is ablaze. Fire blooms through the latticed roof where slates have crumbled and beams have collapsed. The roaring is the noise of the flames, pouring in spate, like upside-down waterfalls from the top-floor windows.

But why is the floor hot? How can she feel next door’s blaze on the soles of her feet? She unsnibs the window—the metal catches already hot between finger and thumb—and hauls the juddering sash upwards. Hot air is sucked into the room, sparks and soot, and she pushes her head through and leans out and down, the ground swinging sickly up at her, too far to jump, far too far, and she sees it now, the evil tongues of flame licking out from the floor below, Mr Stewart’s flat. Her own building is on fire.

She goes to shake Kirsty awake but a thought stops her and she slides as if on castors to the little hallway and presses both palms to the door. Her forehead comes to rest between her palms and she knows, from the sickening heat between her eyes, she already knows.

She fumbles at the chain and draws the bolt. She hauls the door open and a scream catches in her throat. Swooping and diving and wheeling round the landing are ravens, bats, demons—no, shadows—thrown madly about by the flames that clamour and climb to clutch and pluck at them from the stairwell.

Denise approaches the bannister, leans fearfully into an updraught that blasts her cheeks and singes her eyebrows. The stairwell’s an inferno. Hell’s been installed in a Tradeston tenement.

She staggers back to the flat, slams her door, slides the bolt and then the chain as if the blaze will be deterred by something a well-placed boot-sole could obliterate. She snatches towels from the laundry basket—two, three, four—soaks them at the jawbox sink and lays them along the bottom of the kitchen door. She retreats across the blistering lino and the hot boards to the bed-recess where Kirsty is rousing and moaning. Denise climbs back into bed and takes the child in her arms, laying the girl’s sweaty head against her chest. She hears a crash from somewhere below. She presses her daughter’s head even tighter to her chest and squeezes her eyes tightly shut.

Old Mr Stewart. You stupid bastard, she thinks. You stupid fucking bastard. You have left a chip pan on, or you have fallen asleep with a fag in your hand and your stupidity is now going to kill us all. I hope you die in agony, burned in a hell of your own pig-stupid making, but maybe it was not Mr Stewart at all. Maybe it was jakeys, ripping up floorboards in an empty flat, burning them in a brazier. And she pictures Mr Stewart in his inevitable herringbone jacket with the worked-in birdshit on the shoulder, she sees his gappy grin and boxer’s nose, his Santa Claus beard and his flat balding head, she sees him turning this way and that in his shabby flat, his hands holding his head, his hands with their uncut nicotine-yellow thumbnails. He stinks like a midden but he doesn’t deserve to die like this. None of us do.

Too far to jump. Four storeys. Far too far. Would they do it together, when the time came? Could she plunge from this height with the child in her arms? But they’d be saved before then. Any second now she would hear them, sirens, splitting the night. Blue lights whirling. Up the stairs they will stamp, the firemen in their gear, striding through the flames, taking their axes to the front door, shouldering through the splintered wood, bearing them away to safety. But suddenly she knows what it was, the crash she heard, she knows it was a section of the stairwell.

Nobody is coming. Nobody will be climbing those stairs to their rescue. They are on their own, stranded in the square box-bed. The box-bed will be a raft on a raging, burning sea. Could they float off, she wonders, float out into the night, float off over the city’s streets, riding the breeze until a zephyr deposits them on the coast somewhere, still in bed, side by side, on the dunes of Prestwick or Troon?

Kirsty is squirming now, straining to lift her head, It’s too hot, Mummy, and she pushes the wet hair from the girl’s face, I know, sweetie, I know, and blows on the girl’s hairline. I will do anything, she promises. Light from light, true God from true God. If you just keep us safe, I will do whatever you ask, I will go back to Mass, I will get back together with Gordon, I will take him back, I will do that much. And his kingdom will have no end.

She can hear the sirens now but they seem so far away and the smoke is seeping through the towels beneath the door and it is seeping up between the floorboards, We look for the resurrection of the dead, and she can hear the crackling of the flames. I will take him back. And the life of the world to come. 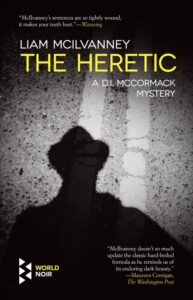 From The Heretic by Liam McIlvanney, published by Europa Editions. 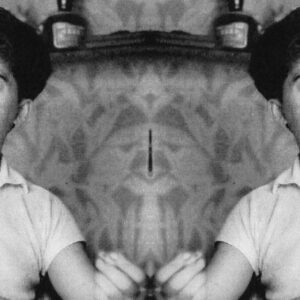 Lit Hub Daily: March 7, 2022 “For the first time, I’m finally getting film roles where my character’s name is Korean.” Sandra Oh on her journey...
© LitHub
Back to top
Loading Comments...