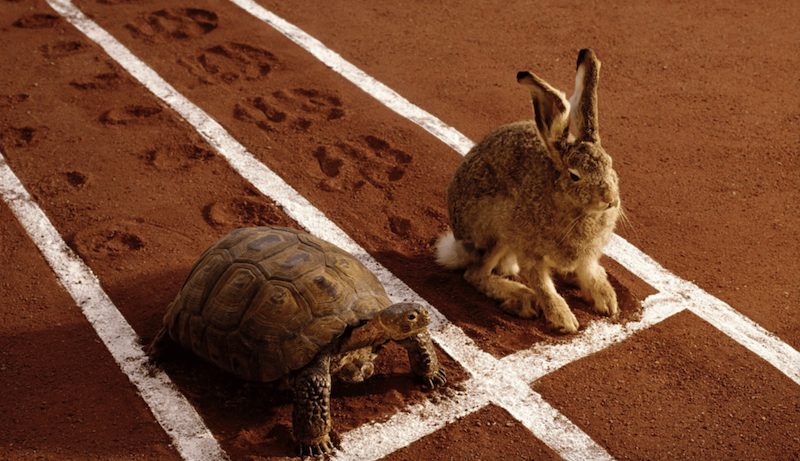 Her brother joins in, though he’s sleepy. “Yes, please, Daddy, one more.”

He sighs, reminds them that’s what they said last time, and the time before, and they giggle conspiratorially.

“Alright, little monkeys, but this is the last one. And then lights out—it’s sleep time!’ He picks up the book and it falls open at a well-worn page. “Ahh, here we go, one of my favorites: ‘The Fox and the Crow’.” He shows the pages to his children, who gaze at the lavish illustrations, and begins. ‘A Crow having stolen a bit of meat, perched in a tree and held it in her beak. A Fox, seeing this, longed to possess the meat himself . . .”

“Daddy, crows are clever, aren’t they?” It’s his son, but before he can respond his daughter chips in too.

“No, but actually foxes are cleverer than crows. Foxes are the cleverest, aren’t they?”

He smiles and continues. They snuggle down into their duvets—foxes, crows and talking beasts filling their minds as they drift to sleep.

Aesop’s fables are the stories of our youth. How many of us were these children, reveling in a version of the fables at bedtime? I’d wager quite a few, even if you don’t remember the details. And I bet you’re familiar with sayings like “slow and steady wins the race”, “the lion’s share”, “sour grapes” or “crying wolf”. They all have their roots in Aesop’s fables, a collection of short stories penned some 2,500 years ago.

Aesop’s stories, which engage us from such an early age, naturally also shape our emerging knowledge about animal natures.

Some introduction to Aesop is needed, of course. The popular view is that he was a deformed, ugly slave who lived between 620–564 BC and won his freedom by telling stories to the royal courts. Some prominent Greek figures, including Aristotle and Herodotus, referred to Aesop in their works, suggesting that they at least believed he was a real person. Many scholars, on the other hand, have pointed out the inconsistencies in different accounts of Aesop’s life, suggesting instead that he was a fictional character, created soon after the collection of stories known as Aesop’s fables rose to popularity in ancient Greece.

Although today, Aesop’s fables are largely marketed for parents to read to their children, they were originally created as a form of social commentary, a tongue-in-cheek way to highlight human foibles and provide moral instruction. They were first printed in English in the 15th century and a further push came in the late 17th century, when philosopher John Locke published Some Thoughts Concerning Education, in which he mused about books that could help children to learn without filling their heads with ‘useless trumpery’. Locke concluded: “I think Aesop’s Fables the best, which being Stories apt to delight and entertain a Child, may yet afford useful Reflections to a grown Man.” Their popularity soared and by the eighteenth century, publisher Robert Dodsley commented that: “Along with the Bible and The Pilgrim’s Progress, Aesop may be said to have occupied a place on the meagre bookshelf of almost every cottage.” Today, multiple copies are likely to be found in the children’s section of any bookshop. Our world has changed beyond recognition and yet, remarkably, Aesop’s fables still have an important place in it.

As a zoologist, animal behavior has always fascinated me. The fact that you can study it scientifically, on the other hand, eluded me until an A level Biology lesson in which my teacher (aptly called Mr Bird) described how robins and male sticklebacks respond aggressively to the color red. I remember being enthralled to learn that people had studied these animals displaying towards postal vans and taxidermy robins; it was as if a switch had been turned on in my brain.

Today, the science of animal behavior is flourishing, meaning that our knowledge is constantly advancing. Some of it gets reported, but much of it doesn’t, and the confines of a newspaper article make it difficult to provide much in the way of wider or historical context. My overarching aim for this book is to bring to life some of the most remarkable discoveries about what animals do and why, in the form of stories that interweave science with history, expert perspectives and plenty of fascinating facts. In doing so, my deepest wish is that you will share some of that same sense of wonder.

So why am I, a scientist, bringing in the apparent fiction of Aesop’s fables—why not just pull together some of the most incredible behavioral discoveries? Initially, my use of the fables was simply a storytelling aid—a popular hook to help build a bridge to the science. That’s still true, but over time I’ve recognized a deeper link with Aesop’s fables, which comes down to their remarkable longevity. It’s impossible to sum up how much the world has changed in the past 2,500 years; how different 21st-century life looks to the lives of the ancient Greeks or indeed any ancient civilization. And yet Aesop’s fables form a thread of continuity among the maelstrom of history. They have well and truly infused our collective consciousness, as preserved and also subsumed into other folk stories around the world as they are. It’s an incredible testament to their popularity, yet the bizarre consequence is that we continue to tell stories that were never created for modern times. I don’t mean the morals: while dated, they’re not exactly controversial lessons for the present day, but our knowledge and understanding of animals today is worlds away from Aesop’s time. This matters because these stories, which engage us from such an early age, naturally also shape our emerging knowledge about animal natures.

Aesop’s fables are wholly, unashamedly anthropomorphic, meaning that the animals are all bestowed with human qualities and emotions. That was their very purpose. Aesop was not an animal behavior scientist (or, indeed a scientist at all, given that the discipline had not yet emerged) and his fables weren’t intended to reveal anything about animal minds. Animal characters are often used because they can provide useful props for stories: they offer the perfect balance of familiarity and otherness that can enable potentially sensitive topics or issues to be communicated in a way that is simultaneously detached. But there was also a pattern to Aesop’s use of different animals for different roles—he, together with other fabulists, was capitalizing on existing beliefs about animal natures, such as those of the ancient Egyptians, where animals were venerated and worshipped.

It’s impossible to pin down when humans started attributing certain behavioral traits to animals, but the roots surely go deeper than this. For example, a look at the 35,000-year-old art of the Chauvet caves in southern France demonstrates that hunter-gatherer societies were highly skilled observers of animals. They needed to be to live alongside them, to predict their behavior so that they could more effectively hunt them or avoid being hunted. The lack of a scientific framework in which to interpret animal behavior certainly doesn’t mean a lack of observational or cognitive skills to think about what animals were doing and why.

Some animals have become so entwined with their fictional, human-like characters that for many people they’ve become one and the same.

We’ve continued to propagate the same character traits as Aesop and those before him—the crafty fox, deceptive wolf, stupid donkey. It’s handy really, when consistent animal characters are used in predictable ways, because they fit with the reader’s preconceptions; as a result, stories can be kept short because character traits don’t need to be set up. By using a fox in a fable about thinking on one’s feet, for example, the story can be much shorter than if the character was a fictional human who needed to first be described before he did whatever the fable was trying to convey.

The problem is that our folkloric knowledge doesn’t always match up with reality. Which doesn’t matter for unicorns, dragons or other mythical creatures. And it shouldn’t be a problem for animal stories either, until fact and fiction start to get muddled. Some animals have become so entwined with their fictional, human-like characters that for many people they’ve become one and the same. As a result, the fables, which surely played a role over the centuries in forming these ideas, became accepted as truth. In Dodsley’s words:

The truth is, when moral actions are with judgement attributed to the brute creation, we scarce perceive that nature is at all violated by the fabulist. He appears, at most, to have only translated their language. His lions, wolves, and foxes, behave and argue as those creatures would, had they originally been endowed with the human faculties of speech and reason.

Most scientists agree that we’re living through the sixth mass extinction event and that it’s being caused by our activity on the planet. Aesop would not have been able to imagine it, but animals need our help today more than ever before. And we can’t do that unless we put folkloric beliefs to one side. At a time when so many animals are threatened, when we’ve already stacked the odds against them by destroying their habitats, persecuting and hunting them, how unhelpful it is that we stick derogatory labels on some of them too, accusing them of character flaws that were based on human faults all along.

For these reasons, I think it’s important that we consider our inbuilt preconceptions of animal natures. Because we do hold them, all of us, and without a doubt Aesop’s fables and other stories played a role in their genesis. Nonetheless, while the seeds may have been sown during childhood, our beliefs are not fixed; they can be adjusted and even reformed as a result of life experiences. Of course, when you hear something that supports an existing belief, it will be strengthened. Our brains can make connections before we have time to think about them, mental shortcuts called ‘heuristics’ that help to free up cognitive capacity for other things. It’s an essential process that prevents information overload, helping us to make sense of the world. But it can also be a hindrance because those mental shortcuts are not always spot on. Sometimes they lead to systematic errors of judgement, called cognitive biases, which predispose us to behave in certain ways. 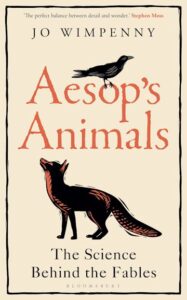 Jo Wimpenny is a zoologist and writer, with a research background in animal behavior and the history of science. She studied Zoology at the University of Bristol, and went on to research problem-solving in crows for her DPhil at Oxford University. After postdoctoral research on the history of ornithology at Sheffield, she co-authored the book Ten Thousand Birds: Ornithology Since Darwin with Tim Birkhead and Bob Montgomerie, which won the 2015 PROSE award for History of Science, Medicine and Technology. Jo writes for BBC Wildlife and has previously presented at the BA Festival of Science, Science Oxford, the Royal Society Summer Science Fair and Glasgow Science Fair.

One Pill for All the Pain: On the Devastating Consequences of the Nationwide Opioid Epidemic 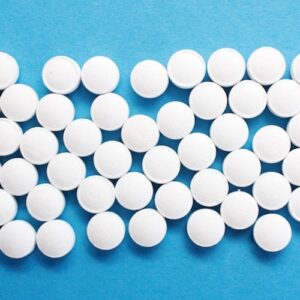 One Pill for All the Pain: On the Devastating Consequences of the Nationwide Opioid Epidemic

Not long after my last book, Dreamland, came out, I was speaking in the small town of Portsmouth, Ohio, where part of that...
© LitHub
Back to top
Loading Comments...