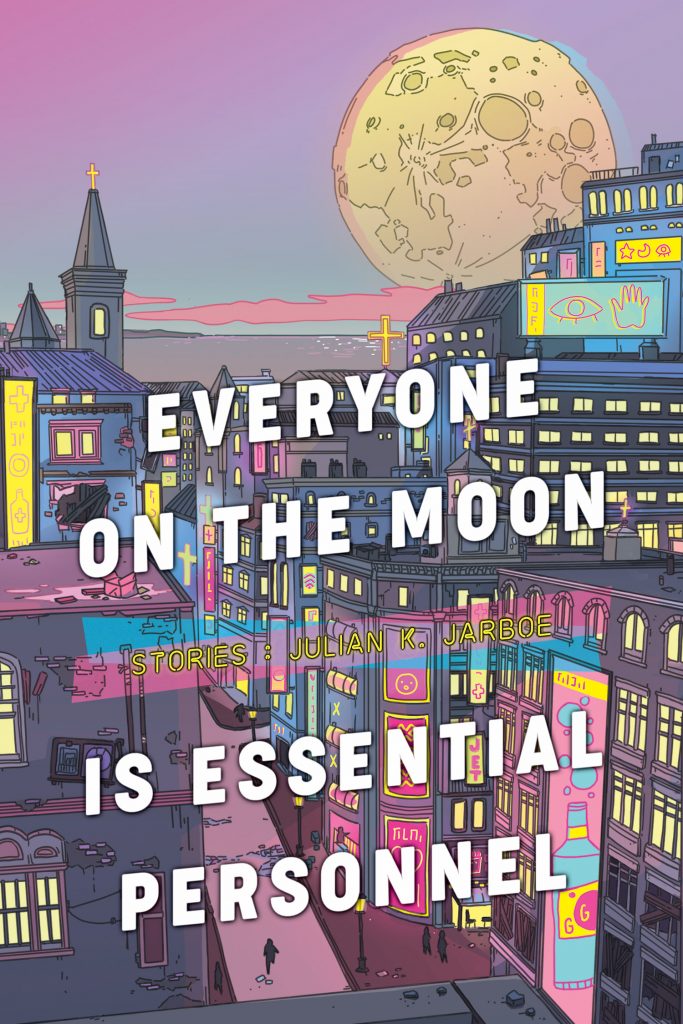 The following story can be found in Everyone on the Moon is Essential Personnel, a debut collection of body-horror fairy tales and mid-apocalyptic Catholic cyberpunk, memory and myth, loss and age by Julian Jarboe. Julian K. Jarboe is a writer and sound designer from Massachusetts.

I got my period young, and heavy. Heavier than the health class pamphlet said it should be. When it came for the first time, I felt something prickling parts of me I’d never seen, and had been told never to touch.

In the elementary school bathroom, I tried to clean myself up with all of the paper towels I could grab, but I was frightened and clumsy. I cut my finger on something down there, the prickling thing. I was not the most hygienic kid and thought maybe it was a woodchip from the playground, somehow. I pried and found it again, and pulled. Out came a small sewing needle. The eye was barely wide enough for the finest thread, but it was unmistakable.

I suspected there were things we weren’t learning from our health pamphlets, and wondered if this was one of them. By middle school, there were bigger needles, and small keys, and decorative screws, and the tiniest little pair of scissors, like something you’d get for a doll.

I told no one about what was happening with my body, and I certainly didn’t ask if it was happening to theirs. School offered few answers. In biology class, I learned about eggs and sperm like they were tidal creatures outside ourselves, fascinating and mysterious but alien. In gym, the teacher told us about wearing deodorant and eating vegetables. She said it was cool and okay to be a virgin and everybody giggled.

Then the nurse and the guidance counselors took us into a special assembly where my options became more clear. We watched a half-melted old tape of a made-for-TV movie about a girl who wants to fit in at school so she stops eating to be skinny, and all her hair falls out and she feels awful, but along with everything else, her period stops coming. I had no idea such a thing was possible.

When I was older, I got myself to a doctor. I filled out a form that asked me about my cycle. I wrote down the dates of my last three, and noted that they had been a nail clipper, a construction screw, and a hex key. I asked the doctor about inducing amenorrhea. I said it just like that to sound medically informed. She frowned and looked at the clock on the wall.

The doctor admitted there were hormonal suppressants safer than an eating disorder. There was a white pill that I could take every day but it would make me much fatter and it might make me cry. There was a yellow shot I could take every week but it would make me much hairier and I might stop crying altogether. She presented both options as hopeless, because if I changed my mind, I’d be permanently fatter or hairier, by which she meant uglier, which even doctors equated with unhealthy.

I picked the yellow shot, though it took three hours to convince her. I said I’d starve myself otherwise and then the harm would be her fault. But I left with my prescription and I grew thick, beautiful hair all over my body and gained some lovely weight anyway and tools stopped growing and shedding from my uterine lining.

I was happier, until things changed in the world and medicine got expensive and hard to find and the sliding-scale clinics closed. I knew someone who could get me something under the table, but it would take a while. It would take too long, I felt, but I’d have to wait.

When my period came back, it was worse than before. I doubled over, confined to my bed with cramps for days, ruining all my sheets. I felt the sharp end of a screwdriver pushing down and out between my thighs. I dragged myself to the bathroom, and pulled down my sick day sweatpants and old boxers. The screwdriver handle was still partially wedged into my cervix, and pinching hard. I plucked out the useless, over-saturated tampon blocking it and felt around inside for a grip on the thing until, humming to myself between Hallelujah breaths, I yanked it out. I rinsed it off and looked it over as I washed my thighs and hands. It was a Phillips head.

Reluctantly, I begged my parents for help. Just a little money to get that under-the-table connection to work faster.

My mother said she and my father would always take care of me in my time of need. They paid for lunch and she suggested I go off my shots for a while, anyway. She said I should give my body a break.

I said it did not work like that. I didn’t need to detox. She shook her head, said she was just worried about me. Said it was a mean world out there. Asked me what the long-term effects of the drugs were, anyway?

I pointed at dad, at his bald head and his beard. I said that’s what the long-term effects are. I asked if she would give her body a rest from her heart medication. She shook her head again. It was hard for them to look at me.

Desperate, I finally told them about the screwdriver, and the years of nails and scissors and needles and keys, and how they were getting larger. I thought, if nothing else, they’d see the simple benefit of relieving me of this. They appeared to be listening. They looked at each other with serious faces and then at me with serious faces.

You know, my father idled aloud, it was your grandmother who had all the gadgets in the house when I was growing up. She found it very empowering.

My mother smiled. They can be very expensive, she nodded, as if in agreement. Do you think, she asked, you might be able to get a cordless drill or a nice knife set in time for Christmas?

“The Heavy Things” © 2017, first appeared in SmokeLong Quarterly, and is featured in the 2020 collection, Everyone on the Moon is Essential Personnel.

Behind the Mic: On Poetry and British Humor with Alison Larkin 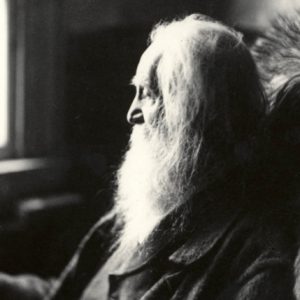 Behind the Mic: On Poetry and British Humor with Alison Larkin Every Monday through Friday, AudioFile’s editors recommend the best in audiobook listening. We keep our daily episodes...
© LitHub
Back to top