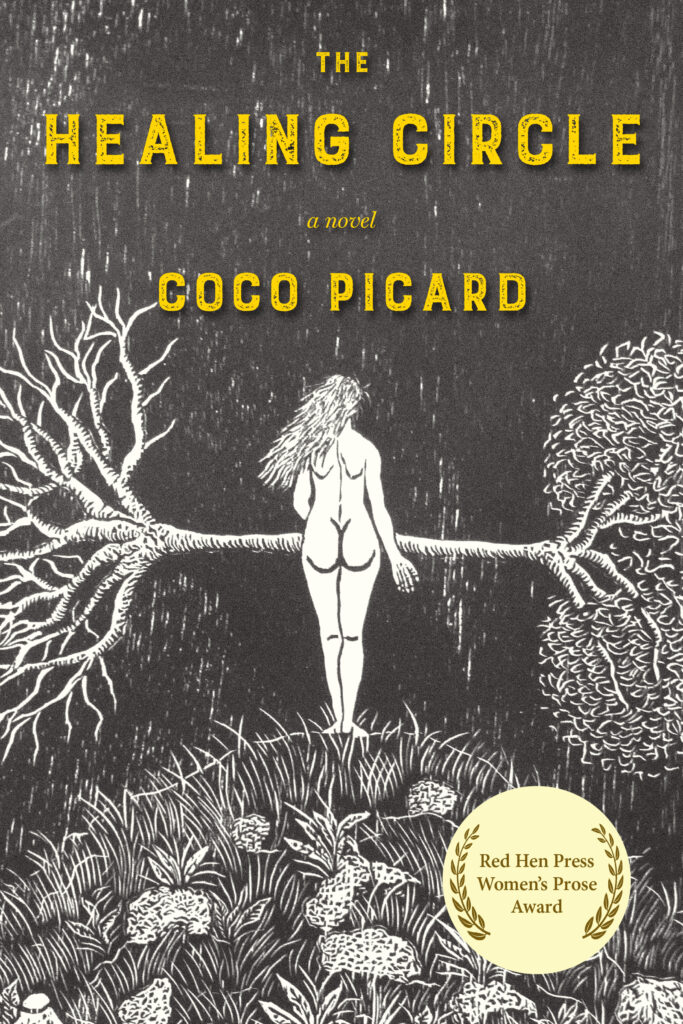 The following is from Coco Picards' The Healing Circle. Picard is a writer, cartoonist, and curator, and the author of two graphic novels, Meowsers and The Chronicles of Fortune. Herart criticism and comics have appeared in Artforum, Hyperallergic, The Paris Review, and Seven Stories Press, among others. She started the Green Lantern Press in 2005, received her MFA from the School of the Art Institute and was a Bookends Fellow at Stony Brook University.

It is just past twilight. A young woman enters the frame of a bleak, late winter wood looking directionless and distracted. She stops to look up at the sky. It isn’t raining but the ground is wet with rotting leaves, and pine needles, and dripping snow. Judging by the cuff of her jeans, she has been walking for some time. It is likely her socks are wet. She trips on a root. Winding between black tree trunks, hands dug deep in a bright green coat, she approaches a tall man in an under-shirt and plastic perforated clogs. He seems out of place, underdressed and ill-prepared, carrying a catheter like a purse.

The strangers nod at one another before carrying on in opposite directions.

The woman bisects a hospital helipad; its concrete is a buckling mess of negligence. Behind her, the man throws his catheter in the air without apparent effort. The bag of urine transforms into a parrot, flies off above the trees and disappears behind the edge of the window.

Gods appear in such strange places, Mother thinks before turning away from the window and drifting off to sleep.

In this story, Mother lies on her back in a hospital bed at a twenty-degree angle. She ran away from her family in California in search of a miracle cure. Using the inheritance left by her ex-husband and help from the Healing Circle, Mother signed up for an experimental treatment at a suburban hospital on the outskirts of Munich. It still feels exciting. This is the cure of all cures. An ultimate healing serum that’ll fix anything, any disease. Because it isn’t legal yet, the drug isn’t sanctioned by the hospital and so Mother is located in a peculiar out-patient wing, otherwise known as the Wellness Center.

Only she can’t get comfortable and keeps changing the angle of her bed. The injections aren’t working as quickly as she’d hoped. She still can’t feel her feet, floats in and out of consciousness—somewhere between this surreal present and other phases of life. That moment, only last week, when medical doctors denied her the stem-cell transplant; she’d been abandoned by traditional medicine and came to this room, now flooded with the stark light of high noon.

She is determined to survive. But sometimes the prospect of recovery looks too intense. Maybe I would prefer to die, she thinks, finally and immediately please, because this feels terrible—the nausea, fevers, dependence, frustration. I can’t imagine what it would take to walk again. Maybe better to give up? she asks, only to stumble directly into another question: What if Mother has already died?

She doesn’t know where this question comes from but it arrives with a panic. She’s never doubted her existence be-fore and the novelty makes her suspicion seem credible—like a stranger showing up uninvited to a dinner party, sodden from a thunderstorm. You can’t turn that person away, not in such inclement weather. But as the dinner party ensues, you start to realize this person didn’t show up by accident but happens instead to be intimately connected to each and every person at the party in different, secret ways. Are you sure you are alive? the stranger asks.

The Wellness Center is antiseptic and white with creamy curtains and cabinets, everything comprised of right angles, and frequented by nurses whom she hardly knows. It’s hard to look out the window today; everything there is blinding with snow. Funny, imagining that this is where her father was born—another part of the building, but still. It could be the afterlife. Mother closes her eyes.

For the first official Healing Circle gathering, Lena, Andrea, and Mother meet at a Prancercise class in the park. Mother arrives late. She’s always running late. Morning fog hangs around, thick and dewy. Their instructor has her hands on her hips in a Wonder Woman pose, explaining the routine and its ability to unlock one’s “Latent Joy Potential.” She wears leg warmers, Star Trek leisurewear, and jewelry suited for a black-tie gala. Seriously, Mother thinks, this woman is my hero. After a brief tutorial on the various moves, the instructor guides her modest group past dedicated Tai Chi practitioners using a precise sequence of dressage-inspired dance moves: half-passes, flying changes, leg yields, etc.

On their way home, Lena admits they could do better. “I liked her style but didn’t get any healing sensation.”

In the few months that she has occupied this room at the Wellness Center, Mother has only seen one helicopter land on the helipad outside her window. It has remained since, a little off to the side, accumulating snow. The aloe plant on her window ledge exhibits more activity. And the longer the helicopter remains that way, the more Mother suspects it is broken. “My one means of escape!” is a joke she has tried out a few times on the telephone. But the joke never lands, no matter how often she varies its inflection or audience. Doctors confirm that Mother is too sick to fly on a plane. She cannot go home. Her disembodied audience in California therefore believes she will die abroad. She hears the sound of pity in their laughter. It makes her furious, but oh well.

The day before, a nurse—one of the new ones—asked if Mother would like an obituary in the event of her death. This particularly young woman is pale in a Victorian way. Probably a fan of Goethe—one of those existential Romantics who would only address him as “Goethe!” with a little pinch of her brow, like a tiny orgasm or, as Mother’s son George would say, the possession of Athena about to be born. In other words, this nurse is the sort of person whose hair is so artistically frizzy as to suggest that she eats moss for breakfast. Mother can never remember her name. Anyway, this nurse has an unattractive habit of posing existential questions in very good English:

“Given that no one knows you in this country and given that the obituary wouldn’t be written in a language either you or your family could understand, is such a document useful?”

She left with a pensive look before Mother could answer.

Mother calls the children for a vote. “I never considered an obituary and now this young woman has explained why I shouldn’t have one. Like one of those, if a tree falls in the forest . . . if you died in a foreign country, would you want an obituary?”

The other two are ambivalent and cagey and so like their father.

Excerpted from The Healing Circle by Coco Picard (Red Hen Press, 2022). Reprinted with permission from the publisher. 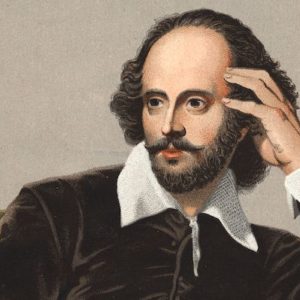