The Handmaid’s Tale Adapts More Than the Novel: Here is America

Will All of This Become Ordinary?

About 20 minutes into the first episode of The Handmaid’s Tale, a bunch of American women sit in a dark classroom, listening to Aunt Lydia, head indoctrinator of the Red Center, tell them all about their brave new life of subservience, rape, and forced pregnancy. When one talks back, she is disciplined (read: tased) with an electric baton and carted off to have one of her eyes cut out. “Girls, I know this must feel very strange,” Aunt Lydia says. “But ordinary is just what you’re used to. This may not seem ordinary to you right now, but after a time it will. This will become ordinary.”

This was not the moment that this show broke me (that moment was coming). But it was the first moment of many that I paused playback, looked around my empty apartment, and said, out loud, to no one: Fuck.

Because Aunt Lydia is right. In the weeks after He-Who-Must-Not-Be-Named’s election, there were many voices speaking up against the normalization of his behavior, decisions, and various racist, sexist, xenophobic, and essentially untrue comments. Now, the cries against normalization have quieted. We still find his tweeting ridiculous, but we accept it. We still point it out when he lies, but because no one is particularly surprised, the story fades quickly. On to the next thing. It has become ordinary. It has only been five months. We are in the second trimester of the forced pregnancy that is He-Who-Must-Not-Be-Named, and already we are used to him.

Well, they’re good. They are also completely terrifying. This show is the most effective on-screen horror I have seen in recent memory. I had meant to watch one episode, but I couldn’t bear to stop. By the time I got to the middle of the third, I was crying. Sobbing, actually, so hard that I had a crying hangover the next day. It wasn’t out of sadness. Nor out of regret for the plight of these characters. It was out of fear—a fear that I could feel in my body.

For the record: I don’t really cry. Not at books. Not at funerals. Certainly not at television.

But yes: this show broke me.

Here’s the most terrifying thing about this adaptation: it’s not just an adaptation of Atwood’s novel. It is, of course, and it’s a good one, but it’s also an adaptation of another text, one that is even closer to my heart: the life that I am living right this second. America in its current political moment. He-Who-Must-Not-Be-Named’s Twitter account… Yes: your life, right now, is both text and context for this television show.

(Sidebar: the show is set in America—for some reason, I had it in my head that the novel was set in Canada, because of the author’s nationality, though after looking back at it, I found that in fact it had always been America. Of course it had: Margaret Atwood is no fool. Wishful thinking on my part, I suppose.)

In a flashback in the third episode, June (Elizabeth Moss) and her best friend Moira (Samira Wiley) go for a run. After their run, they stop at their usual café to get coffee, but June’s card is declined. The cashier, a man they don’t recognize, gets a bit rude, and then he gets very rude. “Fucking sluts, get the fuck out of here,” he says, pushed past his breaking point by the polite request to run the card again. How do Moira and June respond? They laugh at him. “Are you serious, dude?” they say. “Is this your first day or something?” It is exactly what I would do. This is what makes it so terrifying.

“We are in the second trimester of the forced pregnancy that is He-Who-Must-Not-Be-Named, and already we are used to him.”

Because June’s card hasn’t been declined by accident. All female citizens’ bank accounts have been frozen, and in fact, in the next scene, June will be fired, because it has become illegal for women in America to be employed. “It isn’t my decision,” June’s boss keeps repeating. Armed guards are in attendance. “I don’t have a choice.” One of June’s male co-workers, who has probably had the desk across from hers for months, if not longer, looks shiftily at her, barely summoning the grace to be embarrassed. (Fucking sluts, he’s probably thinking. Get the fuck out of here.) Women don’t need bank accounts now, or jobs—after all, they can no longer own property. Their money will be transferred to their husbands, or their male next of kin.

“You know, they needed to do it this way,” Moira says. “The bank accounts and the jobs, all at the same time. You imagine the airports otherwise? They don’t want us leaving, you can bet on that.”

This line of reasoning echoes another, of course. When He-Who-Must-Not-Be-Named illegally banned travelers to the United States based on their religious beliefs, he tweeted, “If the ban were announced with a one week notice, the “bad” would rush into our country during that week. A lot of bad “dudes” out there!” And, in here, in what was formerly these United States, a lot of women who don’t want to be used as slaves and childbearing machines. Better not give them any notice either.

You-Know-Who’s justification for the Muslim ban was that it was meant to combat terrorism, the number one bullshit American boogeyman since 9/11. (Of course, it was obvious to anyone with two brain cells to rub together that it had nothing to do with that—just look at the countries in question.)

“They can’t just do this,” June says, laughing in disbelief, and echoing thousands of families who live in the current America. “They can’t.” But they can, Moira points out, because the country has been under martial law—the constitution suspended—ever since an alluded-to terrorist attack in DC at some point in the recent past.

“Maybe there never were any terrorists,” she says.

I don’t know what the production timeline on this show was like, but certainly it was finalized before at least some of He-Who-Must-Not-Be-Named’s recent unconstitutional actions, including (depending on whom you ask) the airstrike on Syria, which makes it as eerily prescient as the book—maybe even more so.

There are protests, of course, as there have been in our reality. In The Handmaid’s Tale, the protests end with the riot police shooting machine guns into the crowd, to a haunting, underwater version of “Heart of Glass.” If you’re thinking, “now that would never happen in America,” well—so were they. The feeling of betrayal is palpable—and recognizable.

The horror of the flashbacks is carefully balanced. This does not seem like a society at the edge of a dystopia. It seems exactly like the world we know. But it isn’t. Unless, of course, it is. Would we know? Moira and June laugh at the rude barista because they don’t realize where they live. They are standing on the edge; they can’t see how much things have changed. They are too close, and so are we. This is why the flashbacks are so much more frightening than the present action of the show, despite the bleakness and creep of the latter. A reflection of the violence of your own reality is always much scarier than any dystopian society with special outfits, no matter how many parallels you can draw, no matter how many people are tortured, murdered, or raped. I’m not saying these parts aren’t horrifying—just that they don’t cut to the bone in quite the same way.

While there is a difference between the flashbacks of The Handmaid’s Tale and our actual present moment—and it is admittedly a big one: all of this is catalyzed by a sharp decline in birth rates—what it really does is remind us of the true precariousness of our own situation in America. We rely so much on the perceived rules of our society, but in fact we have almost no control. We assume that the rules will protect us, but those rules aren’t actually real.

“I have four thousand dollars in that account, they can’t just take it,” June says, when she finds out that her bank account has been frozen.

“We made it easy,” Moira says. “All they needed to do was just push a few buttons.”

I’ve never heard a more convincing argument to go unbanked (I wonder what John B. McLemore would have thought of this show). But more immediately, let’s not forget that we have a president who is continually breaking all of the rules we thought were real. He doesn’t care about propriety. He doesn’t care about poll numbers. He sees no reason to be diplomatic, nor to get the approval of Congress before attacking another country. He will shut down the airports and take away our rights, if he can. My greatest fear is that, like the women in The Handmaid’s Tale, we will not notice—not fully, not enough—until it is too late. We will go over the edge still thinking we have time.

On the final page of the old copy of The Handmaid’s Tale I pulled out to look over for this essay, there is a message in what appears to be purple highlighter. “I cannot see things from a woman’s point of view,” it says, in a well-formed cursive.

No doubt this is the bored scribbling of some unknown high school student (further annotations within suggest an assignment comparing The Handmaid’s Tale to 1984), but still: it chills me. What a horrifying takeaway after finishing a novel like this—because, of course, if the politicians in the story could actually see things from a woman’s point of view, or if they cared to, the events of the book might not have even taken place. We can make excuses for youth, but I cannot recall ever thinking that I couldn’t see things from a man’s point of view. After all, our country is based on the man’s point of view. We need to start changing that—and fast. We need to start with our children. Or else we’ll all be sobbing in our bedrooms, and much harder than I did, and for much longer, and not because of what we’re watching on television.

Listen: Margaret Atwood talks to Paul Holdengräber on reading vs. watching Shakespeare, the terror of Snow White, and technology and e-books.

what was said on the bus stop: a new poem by Danez Smith 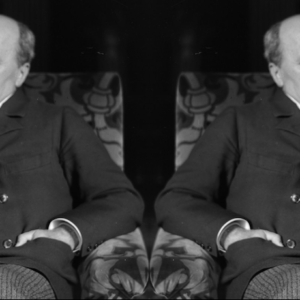 Colson Whitehead has won the 2017 Pulitzer Prize for Fiction; other Arts & Letters award winners include Hisham...
© LitHub
Back to top