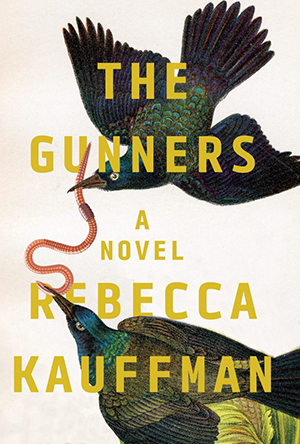 The following is from Rebecca Kauffman's novel, The Gunners. After the death of a close childhood friend, 30-year-old Mikey Callahan begins reuniting with an old group of friends, dubbed "The Gunners." But before he can really reconnect, he needs to confront his own dark past—particularly his relationship to his father. Rebecca Kauffman is the author of Another Place You've Never Been, which was a Center for Fiction longlist finalist.

Mikey Callahan discovered something about himself when he was six years old. Students from his first-grade class were taken one at a time from the classroom and ushered to the gymnasium for standard medical tests. The woman who barked his name (although she called for Michael, instead of Mikey, as his classmates knew him) held his hand as she walked him down the hall, and her fingers were as dry and cool as a husk. In the gymnasium, there were rectangular tables, screens, clipboards, grown-ups dressed in white. A man with a rust-colored mustache put a cold rubber point into Mikey’s ears, stared in at them, and led him through a series of easy tests: instructing Mikey to close his eyes and repeat words the man whispered, then listen to two recorded tones and tell him which was louder.

Mikey proceeded to the next station, where he was asked once again to close his eyes, and say “Now,” when he detected that he had been touched, on his face or his arm, by the tip of a pen. Easy. Mikey liked this

better than sitting in a classroom, and he enjoyed being touched in this way. Gentle, clinical.

At the final station, an easel at the far end of a long table displayed a white piece of paper with a pyramid of black letters on it. A woman stood next to the paper and pointed at letters one at a time, and Mikey read the letters back to her. The letters got smaller as she moved down the page, and he struggled to read the final two rows. The woman made a note on her clipboard; then she handed him a black plastic spoon and asked him to cover his left eye with it. She replaced the set of letters with a fresh one and repeated the exercise, with similar results.

She said, “Cover your other eye now,” and turned the page on her easel once again.

Mikey did not raise the spoon to his face. He felt the heat of dark blood spreading up into his cheeks. He said, “But that’s my good one.”

“I can’t cover this one.” He gestured toward his right eye, puzzled by her request. “It’s the one that works.”

The lady came and knelt before him. She looked at his face and said, “Oh, dear.”

She explained to him that both eyes were supposed to work; most people had two good eyes.

Mikey nodded slowly as he considered this. He had a compulsion to nod when faced with unpleasant information.

“Mikey did not have a mother of his own, and because his father refused to provide any information on this matter, Mikey took it upon himself to search their home for clues.”

When Mikey got home from school that day, his father stared at his left eye, the bad one, with a look of mild distaste; then he led Mikey through a series of his own tests, as though the school had exaggerated the condition. He made Mikey close his right eye and tell him how many fingers he was holding up. Mikey tried to answer correctly, fluttering his right eye open to peek. He begged his father not to make him wear a patch like a pirate, and his father said, “What in the hell would that accomplish?”

His father told him he must make the decision, right at that moment, whether the world would know about the left eye or whether it would be Mikey’s secret, and he seemed relieved when Mikey quickly answered

that it would be his secret. As though the condition, if known by others, would in some way reflect poorly upon both of them. They didn’t speak of it again.

Mikey’s father worked for the meatpacking facility in Eden, several towns over. He always smelled of blood and had red in the corners of his fingernails, carrying with him the insinuation of violence, brute force. His face was lumpy, as though it had been stuffed full, his eyes drooped. For Mikey’s entire childhood, the two of them lived in the first

floor of a townhouse on Ingram Street in Lackawanna, a depressed suburb of South Buffalo. Only half the homes on their block were occupied. The others had boards for windows, liquor bottles smashed into the front porches, stray cats shitting in overgrown lawns. The upstairs tenants in their townhouse wore slippers to the store and always smelled vaguely sulfuric, and they engaged in monthly screaming arguments with the landlord over late rent and threats of eviction. Mikey’s father always paid rent on time, but sometimes he forgot about the utilities, and a man in navy would show up demanding a cash payment—saying that if they couldn’t pay, he’d pull the plug on their house, and then how would they see at night? What would they eat?

Mikey’s father ate four things: cereal, apples, white bread with cold cuts, and Chips Ahoy! cookies. Mikey was not introduced to other foods until he was offered them by his friends from their lunch boxes or by his friends’ mothers in their homes.

Mikey did not have a mother of his own, and because his father refused to provide any information on this matter, Mikey took it upon himself to search their home for clues. He looked for things he had seen in the homes of his friends belonging to their mothers: a ball of panty hose or a shoe with a pointy heel, long lists written in cursive, a little plastic basket filled with nail polish or a box of Tampax beneath the sink, an apron with roosters or reindeer embroidered onto it. He recovered not one piece of hard evidence in his own

On one occasion, however, Mikey discovered a single item that didn’t fit in his home; it wasn’t quite right. It was a small suitcase located in the corner of his father’s closet, beneath a stack of neatly folded sweaters in various shades of gray. The suitcase was tacky and bright— it was the only thing in their entire home that Mikey simply could not imagine his father purchasing. When Mikey opened the suitcase, the scent of the cobalt-blue lining inside tickled at a memory, as faint and faraway and indistinct as a single puff of smoke. Maybe a memory of a memory. Even so, Mikey began to wonder if he had not been born out of a lady’s peeing-hole (like his friends), but had simply arrived in this suitcase, which was perfectly sized to hold a small child and vaguely womblike in its shape. Mikey had no proof that this suitcase had produced

him, but as a young boy it was his most persistent theory, and he liked to open the thing and stroke its strange synthetic fur and imagine that life had begun in this soft, blue place.

From The Gunners. Used with permission of Counterpoint Press. Copyright © 2018 by Rebecca Kauffman. 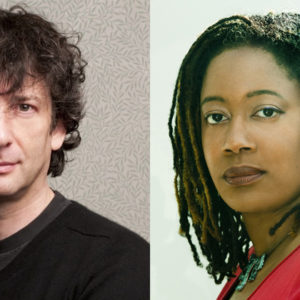 On Writing the Comics—and Queer Characters—We Need We asked Hugo Award-winning authors Neil Gaiman and N.K. Jemisin to sit down and talk about books, writing, comics and whatever...
© LitHub
Back to top