On the Apsley Cherry-Garrard's The Worst Journey in the World

The Worst Journey in the World is the single greatest book in the literature of polar exploration. There are others that are beautiful. There are others that are exciting. There are some that are more revealing about the whys and wherefores of expedition leadership, and some that make a better fist of explaining polar science for a non-scientific reader. There are many that deal with a wider sample of humanity in the polar landscape than Apsley Cherry-Garrard’s band of all-male Edwardian sailors, scientists and gentlemen amateurs. But there are none that have anything like The Worst Journey’s power to evoke a time and a place, and to bring us intimately, almost eerily, inside the small world of an expedition: its sounds, its straining physical life as bodies in canvas harness pull sledges through smooth or granular snow, its chatter, its personalities, its moments of awe when the sweating humans in the foreground catch their breath and the picture opens out (and out, and out) upon the vastness of the Antarctic ice. It is written in an idiosyncratic homemade prose which somehow conveys the emotional pull of its age’s grand talk about heroism without itself being captured by any of the heroic poses. It is not grand; it does not strut or mythologize. Instead it is fervent and melancholy, ironic and understated, absolutely individual and very English. It aims to make a private reckoning with the story it tells. And, since the expedition it chronicles is Captain Scott’s disastrous return to the Antarctic in 1910-13 aboard the Terra Nova, the story deepens inexorably to tragedy.

For Apsley Cherry-Garrard, the tragedy was personal. When Scott’s tent was discovered on the Ross Ice Shelf in November 1912, the spring after the group racing Amundsen to the Pole had failed to return, the two frozen bodies to left and right of Scott were those of Cherry-Garrard’s best friends. He had joined the expedition as a diffident and rather aimless young man, unwilling to settle down to the management of the enormous fortune he had just inherited. On board ship heading south, and then in the equally frantic base camp on Ross Island, where the work of the expedition was got through on the principle of competitive self-sacrifice, and a volunteer could shine, he found his niche—and a mentor in the shape of the expedition doctor, Edward “Bill” Wilson, and a quasi-brother in the ebullient, big-nosed stores officer “Birdie” Bowers. “Cherry,” as he swiftly found himself nicknamed, had been the only boy in a large family of girls, with an admired but elderly father. In some ways, the expedition provided him with a thrilling overdose of testosterone. He, Wilson and Bowers had performed one of Antarctic history’s great feats of endurance together, traveling for a month in the pitch-darkness and ferocious cold of midwinter to the breeding ground of the emperor penguin. And now they were dead, leaving him as the only custodian, the only rememberer, of the overwhelming suffering they had survived together. He was in the search party that found the bodies, and heard—a detail not in the book—the sharp crack as Scott’s frozen arm was broken to pry loose the famous diary. He never quite got over it. For the rest of his life, and he lived until 1959, he revisited the expedition compulsively in memory.

So The Worst Journey in the World was intended as a memorial, but not of the official variety, with the dead explorers represented by statues and busts as frozen in their way as the corpses. Cherry- Garrard wanted, so far as he could, to create a shrine of words in which the experience of the expedition could be reanimated, from the practical jokes and the catchphrases to the hiss of the primus stove during a halt from the march and the passing effects of the light. He was more alert to the sensory detail of Antarctica than any of the other early writers except Scott—and Scott had tended to burnish up his detail into smooth tableaux for publication. Writing in 1919-21, with the First World War lying between him and the events he described, Cherry-Garrard was already reaching back, as he put it, “to an age in geological time, so many hundreds of years ago” when the world had been different. He was dredging an Edwardian past that already felt remote. With his Hertfordshire neighbor George Bernard Shaw acting as literary adviser, he broke out of a relationship with the committee preparing the official history of the expedition, and was freed to write the book he needed to.

The eventual structure of The Worst Journey was both instinctive, because need drove it, and extremely artful. His own ordeal with Wilson and Bowers, the “Winter Journey,” became the book’s emotional center, placed at the midpoint of the narrative, and held up by implication as the experience that defines the nature of the whole. When the spring sledging season of 1911 opens, and Scott’s complex caravan of motor tractors and dog sleds and manhaulers sets off for the Pole across the ice shelf, and up the Beardmore Glacier to the polar plateau, Cherry-Garrard gives it its full dramatic and historical weight: but he has already established the polar journey as being, in a sense, a tragic repetition of what had been (just barely) triumphant the first time around, in the winter, when “three crystallised ragamuffins” had labored through 107 degrees of frost (Fahrenheit) without ever speaking a harsh word to each other. He suspends the narrative of the journey to the Pole at the point when he, and the last supporting parties, turned for base. The diary entries that reveal the final dreadful death-bound homeward struggle of Scott’s party must wait till the story has been told of finding the bodies. Again, emotional priority has quietly been given to the contours of his own, survivor’s experience.

Since then the reputation of the expedition has passed through a complete circle. After decades in which the tragedy of the polar party seemed securely heroic, Scott’s leadership was debunked in the 1970s by the historian Roland Huntford in a way which, again, appeared likely to be permanent. The world got used to a new default understanding in which the expedition stood for destructive incompetence. Yet the wheel continued to turn. Since then, with the re-examination of meteorological records that bear out Scott’s claim of exceptionally low temperatures on the return from the Pole, and a renewed appreciation of the expedition’s scientific agenda, and a friendlier revaluation of Scott’s own style and character, it has become respectable once more to admire the story; though no longer as a fable of Empire, or as a showcase for the stiff upper lip. When we imagine ourselves onto the Terra Nova now, or into the bunks of the hut at Cape Evans, it is no longer in innocence of the possibility of gross blundering there. The accusations have been made, in the strongest possible terms. We know the case against.

One peculiar consequence of this is that it is now much harder for us to see that The Worst Journey was, for its time, a quietly heretical book, dissenting here and there from the heroic official myth. Scott’s widow Kathleen was furious over the nuanced analysis of her husband’s strengths and weaknesses in Chapter 6. “He has criticized Con in the most appalling fashion,” she wrote. Likewise, while holding to the official line that the organization of the expedition had been superb, the book made it tacitly plain that almost everything had been improvised by exhausted people, with no margin for error. But the criticisms voiced since have been so much louder that, reading The Worst Journey as its centenary approaches, we are much more likely to notice its continuing discretion than the ways in which it was, actually, indiscreet. Cherry-Garrard says that Scott “was a bad judge of men,” but will not let us see any example of this bad judgement in action.

Yet the book never reads as if discretion has hobbled it or muffled it. On the contrary, it is as vivid as a dream. It is the dream of his past that Apsley Cherry-Garrard could not stop dreaming; and it is contagious, it infects us too, in passages of immersive, hypnotic recall. “Come and stand outside the hut door . . . You are facing north, with your back to the Great Ice Barrier and the Pole . . .” Three times in the book Cherry-Garrard makes this deliberate break into the present tense, and gives us a set-piece description of what stands before his mind’s eye. But even when the book is ostensibly running along in the past, or is tessellated together from Bowers’ or Lashly’s or Scott’s journal entries, it still somehow possesses the quality of appearing to record something that is happening in front of us, in the very moment of reading. On the Winter Journey we shake to our bones in the ice-clogged sleeping bags along with the three travelers; we step with them across the uncanny hush of Windless Bight, holding a naked candle and steering by Jupiter; we despair of our lives with them when the tent blows away in the hurricane; we hear the calls of the emperor penguins with them at journey’s end. It’s this immersive power, along with the beauty and ironies of the prose, that has given The Worst Journey a stature independent of history’s judgements on the expedition. Right through the trough of the debunking it was being read passionately and enthusiastically, and it is hard to imagine any further twist of events which could ever spoil its appeal.

George Orwell once wrote that when he read Dickens he saw a human face appearing behind the words: not so much a literal image of the author as a picture of the very strong personality the novels suggested. This book, too, has a human face and a human situation behind it. It is the work of a lonely man in bottle-thick spectacles, sitting alone at a table in the library of the grand house he has not managed to fill with a family. Laid out around him on the table he has documents in the handwriting of the friends he knew for two dreadful and wonderful years a decade ago, before the world was shattered. He writes; and while he writes he sees something altogether different from the empty house. He sees the rubberoid-insulated cabin under the icefall slopes of Mount Erebus, he sees the wind-scoured sastrugi of the Great Ice Barrier, he sees the Western Mountains showing purple above the gold mist of ice particles suspended over the freezing sea. In the frighteningly powerful magic lantern of memory, he sees the black specks of human beings on the white snow. As he writes, they begin to move, and become his friends, sledging towards him. There they are. The dream, or the haunting, enfolds him. He sees them, he hears them. And as we read, so do we. 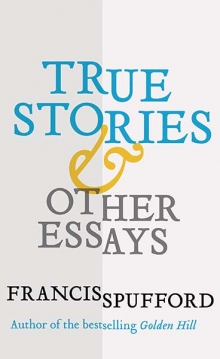 Francis Spufford is senior lecturer, Department of English and Comparative Literature, Goldsmiths, University of London. He is author of several highly praised books of non-fiction, and his novel, Golden Hill, won the Costa First Novel Prize in 2017. He lives in Ely, UK. 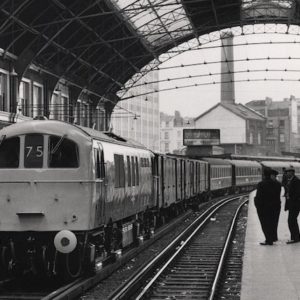 11 November T.S. Eliot I only saw once, some time in 1964. It was on the old Central Station in Leeds, long since demolished,...
© LitHub
Back to top
Loading Comments...