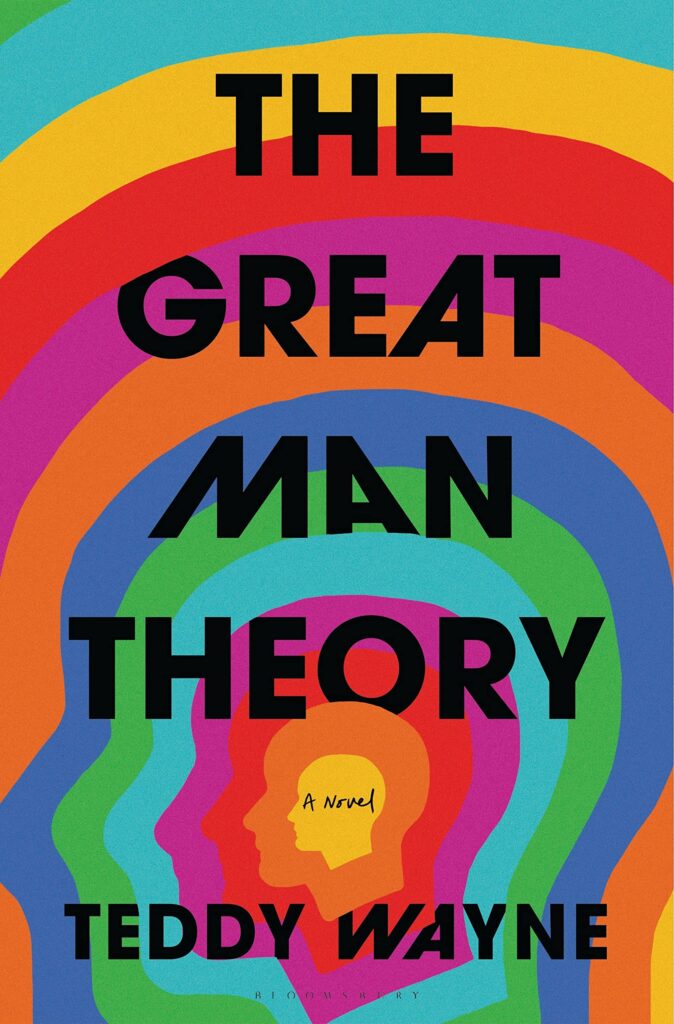 The following is from Teddy Wayne's The Great Man Theory. Wayne is the author of Apartment, Loner, The Love Song of Jonny Valentine, and Kapitoil. He is the winner of a Whiting Award, an NEA Creative Writing Fellowship, and was a finalist for the Young Lions Fiction Award, the PEN/Bingham Prize, and the Dayton Literary Peace Prize. A former columnist for the New York Times and McSweeney’s and a contributor to The New Yorker, he has taught at Columbia University and Washington University in St. Louis.

Paul hadn’t felt much when Jane had become pregnant. Nor when her bump swelled and he could see the extraterrestrial fetus on the sonogram and hear the squishy underwater thumping of its heart, or even feel it kicking. He’d chalked it up to his lukewarm interest in procreating; whereas Jane had wanted a baby, especially a daughter, more than anything else, his reaction to the project had been tepid cooperation. When he’d readily consented to giving their child Jane’s surname of Bailey, he had claimed to others it was in feminist solidarity, but the real reason was that he didn’t care much about his name’s living on in this unborn human. Close male friends he’d confided in about his numbness had assured him that men seldom developed an attachment during the pregnancy, but that he’d be flooded with profound paternal emotions once he met his daughter in the flesh.

Jane’s labor likewise failed to excite anything in him other than helpless anxiety as it dragged on overnight. When Mabel was delivered and eventually thrust into his unpracticed arms, he supposed he felt something, though it was more an acknowledgment of the moment’s historical import rather than overwhelming love for this wizened homunculus of a stranger who was about to upend his heretofore streamlined life. She looked like every other newborn he’d ever seen; nothing marked her as distinctively his. His concerns mounted with each passionless minute he held her. He was different from his friends, defective. Not cut out to be a father. Assessing himself as the head of their household, he conjured up horrific hypothetical scenarios. If he, Jane, and Mabel were all in a sinking boat and he could save only one of them, it would be Jane. And if rescuing Mabel meant surrendering his own life, a trade-off Jane would instinctually make, he wasn’t sure he’d have that same measure of courageous devotion.

A couple of hours later, a salt-and-pepper-haired doctor who looked like a soap opera physician came into the recovery room. He wanted to run an echocardiogram on their baby. The doctor’s responses to their questions were vague.

“Purely precautionary,” he said. “We just want to rule some things out. Don’t worry about it.”

A nurse rolled Mabel away in her bassinet to the neonatal intensive care unit on another floor. Paul and Jane were told the test would take forty minutes, and since Mabel was sleeping so soundly, she needn’t be sedated. Paul stayed with Jane in the recovery room, feeding her unconvincing reassurances.

After ninety minutes with no updates and intensifying fears, they were told they could see Mabel and the doctor. Paul pushed Jane in her post-delivery wheelchair down to the NICU, a dark hallway resembling an air traffic control unit, with computer stations that displayed health statistics he didn’t understand. Soft beeps issued, at once calming in their regularity and ominous in what a sonic deviation might portend. He steered Jane through the cramped space until they reached Mabel, sleeping in her bassinet near another baby. A nursery of newborns slumbered in an adjacent glass-walled chamber. It was sundown now, the only window showing a dusky gray sky rimmed with orange.

“We don’t think it’s anything, but we’re bringing in a pediatric cardiologist just to be on the safe side,” said the soap opera doctor.

“Why does she need to be up here?” Paul asked. “Can’t the cardiologist just look at whatever test you gave her before?”

“We’d like to keep her here for now,” the doctor responded in a tone that made clear the ostensible preference was a mandate. They were welcome to stay with their baby while they waited, he told them.

“Don’t worry,” he said again before he left. Then, glancing into the bassinet, he remarked, “Looks like a little dumpling,” presumably on account of Mabel’s hefty birth weight of nine pounds five ounces.

Paul hated this suave doctor, his blithe placations and flippant farewell. This was a blip on the radar of his day before he went home to dinner with his own healthy kids, just another case he would refer back to with anonymous identification markers for the patient.

“I think I should try to get some sleep,” she said.

If Jane didn’t want to remain with her newborn, her recent labor and delivery notwithstanding, her internal state had to be harrowing. Paul agreed, volunteered to stay, and weakly told her for the sixtieth time that everything would be fine.

After a nurse wheeled Jane back to the recovery room, Paul pulled a chair up to the bassinet. A hospital staffer soon came by, asked how he was doing, then what religion he was.

“My religion? Why does that matter?”

“We have a secular humanist on our staff as well.” “No thank you.”

“And the baby’s religion?” When Paul gave her a look, she said, “I’m sorry, but the hospital requires me to—”

“Buddhism,” he snapped. “She got into it in utero.”

“I have to write down what you say,” she told him apologetically. “None,” he said. “Sorry. You’re just doing your job.”

The conversation left Paul more unsettled than before. Why were they preparing him for the possibility that he might require spiritual guidance? Was her condition direr than the doctor was letting on? And the baby’s religion . . .

Was he allowed to touch Mabel, or might that disrupt whatever they were monitoring? No one had prohibited him, and she was, as of a few hours ago, his. His baby. Strange that after thirty-five years of independent selfhood, with relatives reaching only backward in fixed history, he was now permanently linked with a human hurtling toward an undefined future.

With a hesitant index finger he prodded the center of her pudgy little fist, where the pinky curled into a right-angled C. Like a clam opening and closing, the baby’s wrinkly purple digits reflexively released before clutching him above the top joint in her hot, moist grip.

He watched his daughter through the clear plastic panel of the bassinet, remaining motionless for fear of disturbing her.

At some point an Orthodox Jewish man sat by the baby next to them. Paul nodded, and he nodded back before gravely observing the bassinet and texting. Paul envied him the certainty of his faith when answering the hospital staffer’s question. In the glass-walled room, a Black man stood sentinel over a bassinet and intermittently paced. There weren’t any mothers on the floor. Though they traded no words, Paul felt a kinship with these two fathers that he’d never before felt with strangers, a rare moment of recognizing the truth in the cliché that all people were fundamentally the same.

Mabel’s face was turned away, her cheek bulging like the surface of its own small moon. Her bare chest looked so perfect, smooth and unmarked; he couldn’t believe anything was wrong with the organ beneath its innocent surface. Was she still supposed to be sleeping? Other than her hand, she hadn’t moved the entire time; was she too weak?

The sky blackened. They kept the lights low in his area, the lambent computer screens an eerie, bluish supplement. The Orthodox man departed, then the Black man. Paul’s imagination rioted with medically ignorant speculation and premonitions: surgeries, chronic conditions, constant vigilance. Having never been tested by a real tragedy, he didn’t think he had the fortitude to withstand one. Other new parents, other fathers, would rise to a challenge like this. “Why not me?” he’d heard people with hardier constitutions than his say when dealt misfortunes.

He’d felt foolish speaking to Mabel in the delivery room around others, even Jane, and had said little to her beyond welcoming her to the world. Now, alone, he talked without embarrassment.

“Mabel,” he said softly. “I know this isn’t how you wanted to spend the first day of your life, but you’re going to be okay. I’m going to wait here with you as long as I have to.”

He listened, as if expecting a verbal response, but heard only the quiet beeps in the unit.

Though he had been irritated by the chaplaincy offer, there are no atheists in a NICU, and Paul found himself appealing to God. He wouldn’t pledge faith and piety—both of them would know that was a lie—but he offered a zero-sum bargain, one that would tempt the retributive deity of the Old Testament more than the lenient one of the New: if Mabel was healthy and safe, now and in the future, he would consent to an undetermined number of years being shaved off his own life.

After he signed this mental contract, the doctor’s glib parting words intruded upon his thoughts.

Mabel squirmed momentarily, the first real sign of life other than her belly’s barely perceptible tide of respiration. He had grown so accustomed to her fingers’ wrapping his that he’d nearly forgotten it was still there. As she stirred, he thought her hand would finally unclench, but it was just the opposite: her grip tightened.

Paul, who had believed he was soothing his daughter, realized that she wasn’t, of course, the least bit distressed. His baby was the one unwittingly calming him, her tiny fist a life preserver.

“My little dumpling,” he said once more, this time with warmth.

The pediatric cardiologist, a grandmotherly woman, finally arrived with a comforting smile and folksy appellations. False alarm, Dad; baby girl’s heart is perfectly fine; she can head back to Mama.

An undamming of tension, a deluge of relief. A nurse rolled the bassinet to the patient elevator and the recovery room. Jane tearfully collapsed into his chest at the good news.

“I was so fucking scared,” she said. “I don’t know how you were so strong and steady.”

These weren’t adjectives Paul was used to associating with himself, especially not during the past few troubled hours. He held her and looked down at Mabel, still dozing. His speech to her had birthed a new identity. He was this baby girl’s father, her dad. He would have to protect her, to be a strong and steady man for her—or keep up appearances— even when he doubted his capacity for it.

And his plea to God hadn’t been cobbled together out of fleeting desperation, destined to be forgotten. It was a compact whose consequences he would honor thereafter, regardless of whether its notary were divine or mortal. If he ever had to, he knew now, he would give up his life for his daughter.

The handsomest arrested man in the world just signed a book deal. 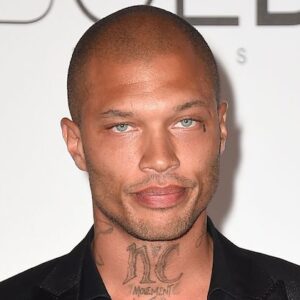 The handsomest arrested man in the world just signed a book deal. Remember Jeremy Meeks, aka "Prison Bae"? Sure you do. The former Crip and current fashion model became a viral sensation...
© LitHub
Back to top