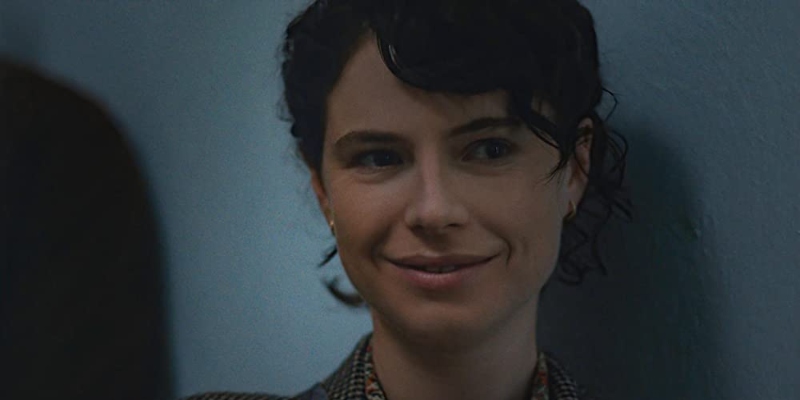 Thirty-two-year-old Irish actor Jessie Buckley is not what anyone would call a “household name,” and she isn’t favored to win Best Supporting Actress at this year’s Oscar ceremony. Having spent much of her early acting career in BBC miniseries, Buckley has long been the archetypal working actor, starring in critically acclaimed but mostly under-the-radar art films (Wild Rose, 2018) and holding her own in impressive prestige ensembles (HBO’s Chernobyl, 2019). But over the past two years, as so many of us were staying in, Buckley was breaking out.

In I’m Thinking of Ending Things (2020), The Courier (2020), and now The Lost Daughter (2021), Jessie Buckley has forged a niche playing observant women who are, at turns, invisible to and hyper-surveilled by others. While her characters too often get the worst of both worlds, ignored unless they are being criticized or otherwise put under pressure, Buckley’s performances transcend any possible dullness or drudgery. Her characters radiate elegance, wit, and steeliness under the direst of circumstances. If, as Roland Barthes writes, Greta Garbo’s face is an Idea, and Audrey Hepburn’s is an Event, I wonder what Jessie Buckley’s might be. A Structuring Absence? A Barely Audible Sigh? A Housewife’s To-Do List, Hastily Scribbled, Later, Lovingly, Rescued from the Trash?

“Jake needs to see me as someone who sees him…. He needs to see me as someone whose approval of him is validated because I’m approved by others.” So says the woman sometimes called Lucy (Buckley) in I’m Thinking of Ending Things (Netflix, 2021), an existential romantic comedy nightmare from the mind of Charlie Kaufman and based on Iain Reid’s 2016 debut novel. Jesse Plemons (another Oscars hopeful) plays the young man bringing Lucy home to meet his loopy parents (played by Toni Collette and David Thewlis), who present as radically different ages from scene to scene.

To put it mildly, this movie is a trip. But Buckley’s curious, unguarded portrayal of Lucy anchors us through the dream logic of the film; we keep company with her in her confusion, and we never lose our connection with her, even as she loses track of herself: her memories, her past, even her own name. (Again, it’s hard to explain.) Lucy’s soulful vision as an artist, attentive to the moods and feelings of others, is at odds with the violent gaze to which she is subjected—by her boyfriend, his parents, even the strange janitor in an eerily quiet high school building.

The film ends with a bizarre, somewhat acrid awards show sequence, in which Plemons’s Jake accepts an honor while Lucy claps from the audience. Despite Lucy having been on unnerving display for the entirety of the film, this is how I’m Thinking of Ending Things chooses to, well, end things: with a mock-pageant of male success—no backlash, no dissent, just unconditional, uncritical applause.

Inside Amy Schumer’s 2016 sketch “Actress in a Leading Role” presents a sly reminder of what the Oscars atheist knows well: that the role of the long-suffering wife in Hollywood cinema is as entrenched as it is tedious. All the nominees in this blood-drained vision of the Best Actress category are played by Real-Life Super Thespians including Julianne Moore, Jennifer Hudson, and Lost Daughter writer-director Maggie Gyllenhaal. Each is tasked with making trite lines like “I’m your wife!” and “Come back to me” stand in for character development.

The role of housewife Sheila Wynne in the Cold War ripped-from-the-historical-headlines film The Courier is not one of these. She’s written with more nuance than the average wife-in-a-period-drama, and Buckley ably conveys the vulnerability beneath a “keep calm and carry on” exterior. From the moment we meet Sheila, as she greets her husband, Greville (Benedict Cumberbatch) with a wry line about their son’s homework, she comes across as his equal. This only makes his covert life as a spy for MI-6 a graver betrayal. When Greville is captured by the Soviets, Sheila proves her mettle by working with agents from Great Britain and the United States to ensure his safe return.

Where Buckley’s performance ends and Colman’s begins can feel indistinguishable.

Sheila doesn’t save her husband by strapping a weapon to her holster or seducing an officer in Moscow—her job is to perpetuate the (false) rumor that Greville’s imprisonment is a huge misunderstanding, a product of his being naïve in his business dealings while abroad. When a friend inquires into the family tragedy, a brokenhearted Sheila must plaster on a cheery smile and laugh off the absurd notion: her doddering husband? A spy? Swallow her feelings she must; this woman is just a nosy acquaintance, but Sheila, who has led a quiet life until now, knows full well the world is watching.

When she visits an emaciated Greville in a Soviet prison, years before his eventual release, she chatters away, conscious of the guards’ presence, as her eyes fill with tears. The two cannot speak freely—of what truly transpired during Greville’s travels, but also of the breach of trust between them, one that never healed. The film doesn’t touch on the couple’s real-life divorce, but frankly, everything you need to know plays across Buckley’s pained expressions.

As young mother and literary scholar Leda Caruso (played, at middle age, by Oscar winner and current nominee Olivia Colman) in The Lost Daughter, Buckley has been nominated for her first Academy Award. But where Buckley’s performance ends and Colman’s begins can feel indistinguishable, not just because of the film’s abrupt edits between the past and present. In Elena Ferrante’s novel, as in Maggie Gyllenhaal’s film, Leda is a victim of the difficult transition that Rachel Cusk describes in her 2001 memoir, A Life’s Work: On Becoming a Mother: “In motherhood a woman exchanges her public significance for a range of private meanings.” Her desire to succeed in academia is in direct conflict with her husband’s constant absences and her responsibilities to her two small daughters, who pull on her attention, constantly disrupting her train of thought and keeping Leda from her other life’s work.

Young Leda resolves her private frustrations with a public desertion of her life, embarking on an affair with a famous professor in her field (Peter Sarsgaard), initiating a sudden divorce from her husband and temporarily but dramatically abandoning her children. Looking back on this time, Colman’s Leda explains her actions to Nina, a young mother (Dakota Johnson) she meets on vacation. Leaving her family “felt amazing… like I’d been trying not to explode, then I exploded.” Nina can only reply that it “doesn’t sound amazing.”

Ultimately, Buckley must capture what this glorious, tortured act of self-immolation looks like from the outside. In moments of great stress, both the younger and the middle-aged Leda grow faint and nearly pass out. As the film goes on, it becomes clear that this wooziness occurs when her private maternal failures become a matter of public shame. Colman’s Leda almost passes out having to explain that she has a spotty memory of her kids’ growing up, while Buckley’s Leda proves unsteady on her feet as she leaves the family home, husband shouting, children crying, suitcases clenched in her fists. There’s no winning for Leda: to be invisible is agony, but to be seen is no better.

According to critics and the awards season predictors-that-be, Colman has a better shot at Best Actress than Buckley has in her category. But Colman’s erratic behavior as Leda—all her abrupt flirty energy and glassy-eyed sadness—is rooted in Buckley’s rendering of the younger Leda. Colman’s Leda plays the symptom; Buckley’s Leda is the cause.

Indeed, if Colman does win this weekend, there’s a good chance she’ll be praising Jessie Buckley in her acceptance speech—she has an adorable history of doing this. Such gratitude would be on-brand for Colman but no less deserved by Buckley. Jessie Buckley might not have stolen the show with The Lost Daughter, but as she’s proven and will undoubtedly continue to prove, she knows what to do when all eyes are on her.

Editor’s note: A previous version of this article referred to Jessie Buckley as British. She is Irish. 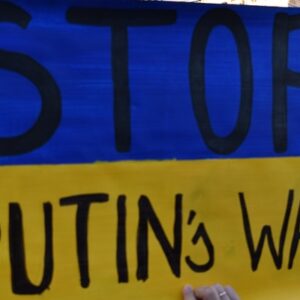