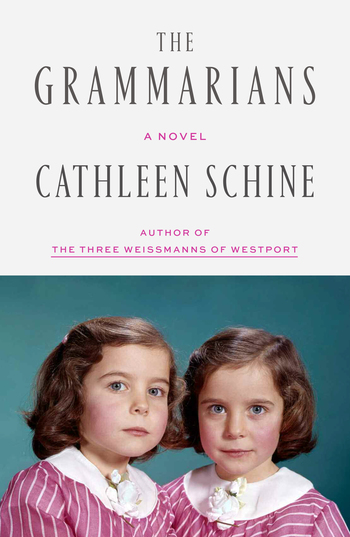 The following is an excerpt from Cathleen Schine's novel The Grammarians which is about two twin girls who share a secret language. It is just as much about language as the joys and stresses of intimacy. Schine is the author of They May Not Mean to, But They Do; The Three Weissmanns of Westport; The Love Letter, among others. She has contributed to The New Yorker, The New York Review of Books, The New York Times Magazine, and The New York Times Book Review. She lives in Los Angeles.

They were late. It wasn’t the first time, it wasn’t even the first time that day, and she could sense time itself slipping. She wrapped her fingers around the bars. The bars were white and shiny. She could see them even in the dim light. With some effort she pulled herself up, then shook the bars until they rattled.

There was no response from the other side.

Then the voice came. “They’re late, as usual.”

She shook the bars harder. She didn’t like the dark, it kept what she loved away from her. It kept her alone.

“Although,” the voice was saying, “if they’re late ‘as usual,’ then that would be their usual time, and you can’t really say they’re late, can you?”

“You’re a pedant,” she said. “An insufferable pedant.” But what she wanted to do was reach out and touch the voice, which belonged to her sister, to lie down beside her, feel the safety of her, warm and breathing. “Pedant,” she said again, instead.

Her sister let out a long, shrill scream. “There. That ought to bring them running. Happy now?”

No, she was not happy now, she was bawling now. The screaming, though it blasted forth from her beloved sister, shocked her every time. She ought to have gotten used to it by now, but she had not.

Which made her cry more. Her sister’s scream did bring them running, as predicted, but somehow that made it worse, made her angry, and she banged her head against the bars in her rage.

By the time he lifted her, she was howling like a wolf. It wasn’t until the bottle arrived that she was able to be calmed.

“You do get yourself worked up,” he said. He kissed her, and she sucked on the bottle and let the milky sleep wash over her. His shirt smelled of laundry soap and there was the scent of wine on his lips. He walked to her sister’s crib. “What if there were three of you?” he said gently as he picked her up, too, and held her in the crook of his other arm.

And it was. Her sister was right. She was right so often.

She pushed the bottle to the side of her mouth and said thank you.

“More? Is that what you said, little Daphne?” He pushed the nipple back to the center of her mouth. “There we are.”

Their mother came into the room with the other bottle of warm milk. She shook a few drops onto her wrist.

“No good deed goes unpunished,” Laurel said, but the adults just smiled at her patience and good nature.

“They do howl, it’s true,” their mother said. She took a baby, kissing its head.

“They want to make sure we hear them. They’re very intelligent.”

“One howls, then the second one howls even louder. It’s as if one doesn’t want to be left behind the other.”

Their father bounced the baby he held almost frantically. He sang and paced, his arms aching with her small weight. “Are you Laurel or are you Daphne?”

“Oh, Arthur.” But the next day their mother marked Laurel’s toenail with a dab of scarlet nail polish.

It was difficult sometimes when both girls were red in the face and vibrating with infant rage.

“I wish I knew what they wanted,” he said one night, holding the twins as his wife came in with the bottles, both properly warmed this time.

“Take a wild guess,” the little girls cried out. “We want those bottles!”

“I think they’re making themselves quite clear,” their mother said, and she laughed. Though sometimes they unnerved Sally, too, chattering away in nonsense syllables as if it were a real language.

Their father exchanged a baby for a bottle, and the children were suddenly quiet, the only sounds their soft sucking and the creak of the upholstered rocking chair as their mother sank into it.

“Peace at last,” she said, kissing the baby’s head.

Their father continued to pace, back and forth across the small bedroom with its twin cribs, smiling down at the contented baby he held. I love you, he thought. Whichever the hell one you are.

“It’s not a race,” their father said. “Well, Laurel wins every race anyway.”

“But you’re smarter,” Laurel said. She got tired of hearing about the seventeen minutes. Was it her fault she was older? And taller? And faster? That she came out first? The thought of “coming out” of their mother made her queasy. Why did everyone always bring it up, you came out first, you’re the oldest because you came out first?

“You were alive for seventeen minutes without me. I was never alive without you.”

“Laurel! Daphne! Go outside and play,” their mother said. “It’s nice out.”

Laurel and Daphne. Two names for the same minor Greek goddess. But Uncle Don, who disliked them, sometimes called them Romulus and Remus Wolfe after the Roman twins suckled by a wolf, nicknames Sally hated. She did not like to think of herself as a hairy wolf. Sometimes Don just called them the Wolves.

“We revolt you,” Laurel said, running past him.

“We are revolting,” Daphne said. “Against you,” she added. They ran out the door, and the sun was sudden and white. They picked dandelions. The necklace Daphne made was too short and became a crown. A bee landed on it and she sat very still until it buzzed off. Laurel said, “Bee still,” and they laughed and rolled down the hill until they felt sick.

She wriggled into the crawl space under the neighbors’ house. Daphne followed. It smelled sickly, of damp and dirt. Insects skittered away. A few footsteps creaked above them. A toilet flushed. Even the spiders’ webs were dirty, powdered with fine silver dust and visible in the gloom. Mr. Martinson did not yell at Mrs. Martinson. Mrs. Martinson did not yell back. They could hear music from the television. Million Dollar Movie.

Because of Uncle Don, they had once been taken to a doctor who specialized in twins.

Daphne was the first to panic. She took a sudden shallow breath, her last, she thought, and she could not breathe in either direction, in or out. She clawed her way through the broken lattice and out of the crawl space, gasping. Behind her, she heard Laurel, her breath rasping, too. Laurel caught it, Daphne thought, like a cold or measles: she caught being afraid. She thought, At least I’m first in something, first at being scared. They lay on the grass, faces to the sun, light and air and warmth everywhere to rescue them. Their hearts beat more slowly. They were calm.

“Your two cowlicks were licked by the same cow,” their father said. He smoked a cigarette on the porch and looked down at them fondly. They were hiding now. They often hid beside the front steps. They looked up at him. Laurel put a finger to her lips.

When their uncle came out he was already smoking his pipe. He was their father’s brother. He was afraid of the twins. He said he was afraid for them, but they could tell they scared him. When they were in the same room he kept his eyes turned away. There’s too much going on, their uncle said once, cocking his head in their direction.

Uncle Don believed that the twins should probably be raised apart so that each child could develop her own identity. He was the one who worried the most about their secret language. He said it was unnatural. He was a psychiatrist, so their mother and father had to pay attention to him.

That morning the girls had stood in front of him, side by side, while he read the Sunday paper, and stared.

“What is wrong with these two?” said Uncle Don, who never addressed them directly.

“Don, really,” Sally said. “Is that how you talk to your patients?”

The girls began to sway together to the left, then the right, then again to the left.

“Jesus, what are they doing now?”

“From side to side,” Daphne added.

Their parents burst out laughing, but Uncle Don left the room.

“I’m changing the baby,” she yelled from the girls’ bedroom.

Brian, the baby, began to cry.

“Why are they in our room?” Laurel asked.

“Where would you like Aunt Paula to change the baby’s diaper?” their mother said. “In the garage?”

“Uncle Don took the funnies with him,” Daphne said.

Their father said they should not tease Uncle Don, and they would have to wait for the funnies.

Uncle Don didn’t go home, he never did no matter how much they tormented him. Brian was taking a nap, he said, and could not be woken up, or Brian was awake and had to be rocked to sleep so he could take nap. Brian needed to be fed or Brian had just been fed and needed to be burped or had just burped and spit up and needed to be changed. Brian, as far as Laurel and Daphne could see, ran the show.

“Like an old lollipop,” Aunt Paula said. She smiled at the girls. They once heard her tell their mother that they kept Uncle Don honest.

“What are your feral children doing now?” Don said as he stood on the porch with their father.

Daphne pulled a little notebook and pencil stub out of her pocket. She wrote “Kee-riste.”

“They take notes?” Uncle Don said. “What are they, in the CIA?” He pointed the stem of the pipe at them, jabbing the air.

“I collect rocks,” Laurel said, which was not true.

Their father put out his cigarette, and the two men went back inside.

Because of Uncle Don, they had once been taken to a doctor who specialized in twins. The doctor disagreed with Uncle Don. He did not think twins should be raised apart. He was tall and had cold, bony hands and white hair. The girls sat in small chairs at a small table with books and blocks to play with while their parents sat in two normal-sized chairs facing the doctor’s desk. The windows were too high to look out of.

“Drue, drue.” And Laurel got a clean sheet to try again.

“When they were babies, Doctor, I honestly thought they were having conversations with each other,” their mother said, “in their own language.”

The doctor said, “Many twins have a private language. It’s natural, nothing to worry about. They outgrow it once they begin to speak properly.”

“Oh, they do speak properly. Beautifully. They’re five years old. They speak, they even read. They read the dictionary, Doctor. Then suddenly they’ll be babbling in gibberish.”

Kevin McIlvoy on Writing About Listening

Where Was My Hero’s Journey?, My Portrait of the Artist as a Young Girl? 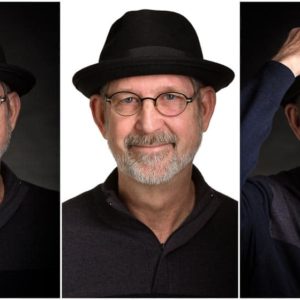 Kevin McIlvoy on Writing About Listening First Draft: A Dialogue of Writing is a weekly show featuring in-depth interviews with fiction, nonfiction, essay writers,...
© LitHub
Back to top