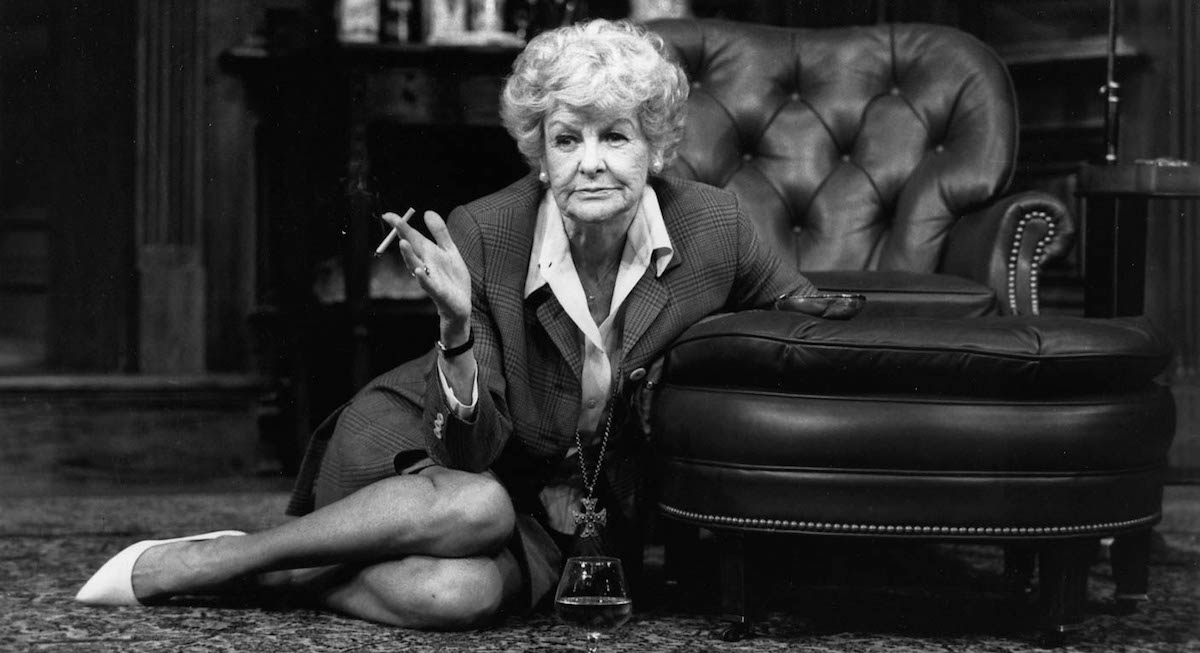 She Who Pulled No Punches, Ever

On the afternoon of November 17th, 2014, hundreds of people made their way through a dark rain toward the Al Hirschfeld Theater on West Forty-Fifth Street in New York City. Settling with a certain expectant jollity into its plush red seats were actors famous and obscure, executives, playwrights, press agents, journalists, out-of-towners, a bronzed billionaire fashion designer who’d pulled up in a limousine, and ordinary civilians arriving on foot with their busted umbrellas.

They had arrived not for a matinee—for this was a Monday, when Broadway stages are by long custom dark—but to pay homage to Elaine Stritch, the indefatigable-seeming entertainer who at 89 had died of stomach cancer four months earlier in Birmingham, Michigan, a leafy suburb northwest of Detroit. Not for Stritch the mealy-mouthed “passed away”; her preferred euphemism was “left the building.” It indicated her fundamentally citified view of life.

Plenty of her contemporaries were present, including Hal Prince, the director and producer whose compactly commanding stance and 21 Tonys gave him a Napoleonic air, and Liz Smith, the platinum-haired gossip columnist known as the “grande dame of dish.” Some in the audience were puzzled, though, by the absence of Stephen Sondheim, the composer and lyricist whose virtuosic work Stritch was devoted to above all others, whose approval she craved more than anyone else’s. (He had a respiratory infection that day, he said later. But he had also refused an earlier invitation to speak, writing simply that he didn’t know the honoree well enough, and sending organizers into frenzied analysis of what exactly that might mean.)

There were also others much younger, many of whom had discovered Stritch only after seeing her 2001 one-woman show At Liberty: the artful summation of her marathon career conducted with the sole prop of a barstool. Written with John Lahr, then The New Yorker’s chief theater critic, its success had led to the recognition she had longed for since arriving in New York almost 60 years before.

She was deemed a Living Landmark and joyously heralded by strangers in her regular and often untrousered patrols from the Carlyle on Madison Avenue, the last in a series of venerable hotels she had chosen to call home. So far as that went. “I don’t know if I really have any home,” she said once. “I don’t know how I feel about home. I don’t know where home is.”

To the end she was both restless and routinized, selfish and generous, straightforward and elliptical. “How do you solve a problem like Elaine Stritch?” asked one of the many celebrities in attendance, the actor Nathan Lane. He was standing at a podium under a Hirschfeld line drawing of the honoree clutching, characteristically, a brandy snifter, made to publicize the 1996 revival of Edward Albee’s play A Delicate Balance. “How do you hold a fucking moonbeam in your hand?”

The crowd laughed knowingly at the profanity, which Stritch had deployed decades before it was common in polite society. This was one of several ways she had been ahead of her time or even somewhat out of time. She had chosen to live alone when the average woman of her Midwestern, Catholic, upper-middle-class background had become a Mrs. and a mother before age 30.

She had defied stereotypes of gender and age, projecting both feminine and masculine and refusing the slow fade accorded most in her profession (along with plastic surgery). She insisted on being seen and heard, felt and dealt with. She skirted high culture, low culture, and everything in between.

Though it was variously suggested Stritch’s voice was infused with gravel, whiskey, or brass—a writer for People magazine once compared it to “a car shifting gears without the clutch”—her admirers from the music world had grown to include the longtime director of the Metropolitan Opera, James Levine; the indie rocker Morrissey; and the pop idol Elton John, who had sent half a dozen huge orchid plants to her small private funeral in Chicago with a card reading: “You were a shining star.”

Stritch had been charged with such restless energy, one could be forgiven for believing she might yet emerge for one last encore from behind the Hirschfeld’s corrugated curtain.

Onstage at the Hirschfeld, Stritch’s colleagues sang the numbers she’d made her own. Bernadette Peters shrugged and mugged through the goofy and dated “Civilization (Bongo, Bongo, Bongo),” about a jungle native underwhelmed by Western society and its technological advancements. Laura Benanti and Michael Feinstein did the contrapuntal duet “You’re Just in Love” from Irving Berlin’s Call Me Madam, alternately plaintive and twinkling. Betty Buckley got the wistful ballad “I Never Know When (to Say When),” perhaps the sole keepsake from a largely forgotten 1958 musical called Goldilocks.

But by far the most affecting performance came toward the event’s end, when the lights dimmed and an image of Stritch herself materialized on a big screen, like a glamorous ghost, in what might have been called her prime had she not so forcefully redefined that term. Wearing an ensemble of white blouse and black tights cribbed from Judy Garland’s famous “Get Happy” sequence but carried off even more effectively with her long, slim legs, she began the Sondheim song “The Ladies Who Lunch,” from the landmark 1970 musical Company, which was for so many years her signature anthem.

The Stritch-specter inhabited the dark world of the lyrics completely: cocking her silvery blonde head at the camera, enunciating, clasping her manicured hands as if in prayer, raising and furrowing professionally arched eyebrows, grinning, winking, nodding, jabbing, giving the okay sign, beckoning, pumping a fist, clawing, and throwing both hands up in a V shape that seemed to signify equally victory and defeat.

So here’s to the girls on the go—
Everybody tries
Look into their eyes,
And you’ll see what they know Everybody dies.

“Everybody dies,” Prince had quoted at the podium, and paused. “I’m not so sure about Elaine.”

Indeed, Stritch had been charged with such restless energy, one could be forgiven for believing she might yet emerge for one last encore from behind the Hirschfeld’s corrugated curtain. Zelig-like, she had witnessed the Ziegfeld Follies and MTV videos; known the era of blackface and performed for the country’s first African American president; and had her saucy one-liners (“another brilliant zinger,” per the Sondheim song) committed both to piles of yellowing telegrams and the online echo chamber of Twitter. For decades she had kicked up her heels; for decades more she had made a Sisyphean trudge through the 12 steps of recovery.

Partly because of a consuming love affair with alcohol, partly because she in general found Hollywood “phony” and “a shuck,” she had had only middling success in feature films and television. A firmer grasp on those twin brass rings of the entertainment carousel might have afforded her the financial security she was almost pathologically unable to feel, even after her bank account swelled to millions.

But long before the advent of so-called reality TV, the reporter’s tape recorder and documentarian’s camera had oscillated eagerly toward Stritch, alert to the quality of what is now called “authenticity.” This was someone who, it was said often, was incapable of not telling the truth. This didn’t mean she didn’t sometimes embellish a story or make one up entirely; some whispered that her avowed 24-year commitment to sobriety, openly relaxed in her waning months, was fictitious. But she had an emotional clarity and immediacy, a get-to-the-pointness that eludes most people.

What had propelled this straight-arrow girl from the squarest part of Detroit to the center of Sondheim’s urbane artistic circle—or at least to gesticulating insistently on the perimeter? Had she truly beaten her alcohol addiction or merely nudged it to the curb? Was she an under-credited figure in the history of American show business or an adult version of Eloise at the Plaza, tweaking the elevator men and shirking her bills?

The answers would begin there at the Hirschfeld, in the hushed chatter of those gazing up in remembrance and rue, as John Updike put it in “Perfection Wasted,” his poem about death, choosing a theater metaphor: “those loved ones nearest / the lips of the stage, their soft faces blanched / in the footlight glow, their laughter close to tears / their tears confused with their diamond earrings.” And in the speeches of those onstage.

She had expressly forbidden a memorial, but “we all know that she would want this,” said Hunter Ryan Herdlicka, a young actor who’d appeared with and befriended Stritch during her final appearance on Broadway, as the sardonic, wheelchair-couched Madame Armfeldt in Sondheim’s A Little Night Music. “She lived to be the life of the party and the center of attention.”

But Stritch yearned to be not just acknowledged, but understood. She learned after long trial to live in the moment, and to face the future, yet she could not help compulsively examining her past, parsing why a girl from a family who put the convent in conventional had chosen what Oscar Hammerstein II called in Show Boat “life upon the wicked stage”: the darkened wings, the traveling spotlight, the bouquets, the kissed cheeks and whispered congratulations, and the buckets of champagne chilling in the dressing room.

For his 50th birthday, Nathan Lane told the assembled, she’d given him “a beautiful baby picture. Of her.” This too got a knowing laugh.

But upon reflection it was a rather poignant anecdote. To share a photograph of oneself as a baby is to ask to be regarded at one’s most vulnerable: naked and unspoiled. It is a plea for love. 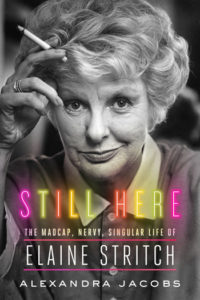 Alexandra Jacobs is a longtime features writer, cultural critic, and editor who has worked at The New York Times since 2010. She has contributed to many other publications, including The New Yorker, The New York Observer, and Entertainment Weekly. 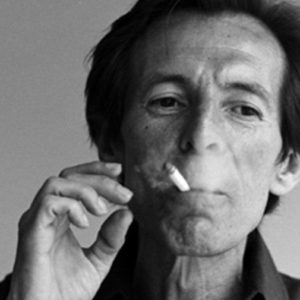 It’s not easy to get a fix on Ribeyro’s own face, since his appearance changed a lot from one photo to another: his hair...
© LitHub
Back to top
Loading Comments...