The Function of Shame
in Literature

Marina Endicott on the Forced Schooling of Indigenous Canadians

Why does a story, a memory, stay with us? A few remembered scenes and images stay close to the surface, accessible and natural to write about, but some things slide deeper and only later work gradually to the surface, like an old sliver working its way out of skin.

It was that way with a story my childhood piano teacher told. Stories leaked out of her about her own childhood, sailing the world aboard her father’s clipper ship, as a reward for playing well or a sop if she’d lost her temper, as she often did with me. If I hadn’t practiced (and I never had), asking about the narwhal’s tusk above the grand piano or the famous Hundred Faces fan given to her father and mother on their honeymoon voyage to China was a useful way to use up the lesson hour.

Ship portraits hung on the walls: the Belmont, the Morning Light. Her house was a shrine to the age of sail, crammed with curios, priceless porcelain and scrimshaw, bought or appropriated during a life at sea. Her sea stories matched the metronome ticking adagio time in the dark drawing room.

But she did not tell me about her mother buying a little boy in the south seas for four pounds of tobacco. I didn’t hear that story until the 1990s, when (searching for another distraction from work) I googled my teacher’s name and the computer screen spit up the icon of a speaker, with Miss Ladd’s cracked old voice coming out of it: a taped interview with her before her death in Yarmouth, Nova Scotia.

How many Tuesday afternoons I spent with her. Wherever you go, there’s your teacher, they say, but she was one of the best I ever had and I heard her so-familiar voice with pleasure and even love.

Until I heard the story, about her parents’ honeymoon voyage. It was a bad one.

Coming up on the way to China… they came to this island and one canoe pulled out. They were poor-looking natives and Father allowed only two of them to come on board. The sailors were all ready for them with sticks. These men came aboard, and with them came a little boy. Mother was dying to have him, she thought that would be so much fun. They ended up buying the little boy for four pounds of tobacco. He didn’t know anything. When he saw stairs he started down head first on hands and knees. Of course, he had no manners either! He had to be taught.

Mrs. Ladd taught the boy to read and write English and even a little Latin; the ship’s cook taught him Chinese ideograms. He must have been a quick study. It’s hard to work out how long the boy lived on the ship—perhaps a year; the record only says that in Shanghai he caught a cold that worsened on their way around the Horn. By the time they reached New York he had tuberculosis.

He wanted a coconut very badly. My father combed New York and eventually found one. The boy died of TB, hugging his coconut.

Hearing this horrible story in Miss Ladd’s voice was a shock, or not enough of a shock: her casual recital noted nothing wrong in her parents’ actions, no special tragedy about it—as if she told the story of a pet they’d once had.

The residential school system in Canada lasted more than a hundred years, and its effects have devastated generations.

Talented, exacting, bigoted and superior, Miss Ladd was the product of her upbringing and her age; so was her mother, no doubt. So am I. The story made me feel ashamed, implicated in it by my association with these persons who kidnapped a child and allowed him to die.

That too felt familiar. It reminded me of the shame I live with as a white Canadian, shame for the historical wrongs done to Indigenous children.

In Canada we have been struggling for many years to uncover and acknowledge the history of residential schools. In the original treaties between Canada’s Indigenous peoples and the Crown (the government, rested in the person of Queen Victoria), the contractual language hovers warmly between trust and love; the Chiefs who signed are called to believe in her maternal care for them, and in the knowledge and love of the officers representing her. Those treaties are difficult reading, because the loving language is at odds with the Canadian state’s disregard for its undertakings, both then and now.

One of many broken agreements was that children were to be educated “whenever the Indians of the reserve shall desire it” in schools on the reserves. But rather than instruction being optional for those bands who desired it, as agreed, the state abducted Indigenous children and forcibly confined them in residential schools far from their reserves.

This was done, according to Sir John A. Macdonald (speaking to Parliament in 1883), to break their link to their culture and identity so that the children might “acquire the habits and modes of thought of white men.”

The residential school system in Canada lasted more than a hundred years, and its effects have devastated generations.

Miss Ladd’s story stuck with me, a splinter under the skin. I pushed it down, wary of tackling a story so miserably fraught with wrongs. And I didn’t trust that coconut finish.

A few years later I went to New Zealand with the Commonwealth Writers Foundation, and on to do readings and workshops in Tonga. During that visit I met hundreds of school children and came to know a few of them. Miss Ladd’s story rose in my mind, and this time it seemed like cowardice not to think about it.

Last month I read about six Tongan boys who were marooned on the island of ‘Ata for 15 months in 1965—who were actually not “the real-life Lord of the Flies,” as the Guardian article put it. Those Tongan boys knew how to live in their environment, even on the waterless island of ‘Ata. Unlike Piggy and the rest, they embodied Margaret Mead’s definition of civilization by successfully setting the broken leg of one of the boys.

The disintegrated humanity of Lord of the Flies doesn’t fit their experience in the least—that’s a wrong assumption. Whoever tells a story brings their own baggage to the telling, and this is one of the reasons it’s important not to hog the mic, to appropriate stories: they are better stories if told by the people who own them.

And yet, and yet, I was propelled to tell the story of Kay and her bought or appropriated brother, to examine through fiction what made a conventionally-good woman take that boy away from his people and his home, what urging of Christian charity or sudden desire for motherhood might have propelled her to appropriate a child in the full belief that she was performing an act of benevolence. Given my race, gender and religion, and my own very late motherhood, I might have done the same thing if born at a different time.

I chose to look through the eyes of two women, older and younger; one buoyed by the correctness of her actions, the other perplexed by an amorphous feeling of wrongness, of shame. I wanted to take on those residential school arguments: that it was for the children’s good, that they had only good and benevolent intentions, that education was necessary—to examine those arguments from the white side, the benevolent side, and to refute them.

What does reconciliation look like? To Kay it means putting things back where they were found. Carefully remaking that violated place.

Even someone genuinely kind and careful, even Thea, is wrong. I hope the reader, no matter what views she or he holds at the outset, may come around to the same difficult realization that Kay does: that it was wrong to take Aren away. That it was deeply, unforgivably wrong to take children from their families and put them in residential schools. To come to the conclusion, as I have, that there can’t be forgiveness. There can only be reparation and reconciliation.

What does reconciliation look like? To Kay it means putting things back where they were found. Carefully remaking that violated place. She thinks that for two reasons: she knows she has to do something, and she is young and foolish. So am I maybe: but I also know we have to do something. It’s not sufficient to sit in shame without taking action to move towards something better.

An action I can usefully take is to look at events that come to be called history. One of my own wrong assumptions, starting out to write this book, was that the historical record was somehow solid. It was a salutary shock to realize, later than I want to admit, that the “historical record” is nothing but the expressed opinion of two or three people, that it’s nothing to rest on.

Even if we take the scene at its face value when the boy is traded for tobacco, who is to say now how his own people saw the transaction, how they interpreted it through the barrier of language and custom—and the maternal language of the exchange.

Memory is a strong fuel for fiction, but it’s mutable. My memory of Miss Ladd’s drawing room, her two pianos crowded in with precious or gimcrack relics, silence and music, was overwritten by the Tongan children I met and lent my hat to and joked with, and by the ordinary life and geography of the Pacific. In writing historical fiction, without actual memory of the period, we create memory not just from text (diaries, logs, letters, laundry lists, ship’s manifests) but by assembling sense detail: photographs and paintings, deck-plans, clothes; detritus from trunks, cupboards, the attics of old houses.

In some sense this story of Miss Ladd’s mother does belong to me, by virtue of knowing her artifacts so well, having spent seven years in her darkened drawing room, staring into the convoluted whorls of the narwhal’s tusk while Miss Ladd drifted off into a story that I helped her to string out as long as possible, so as to avoid going on to Barcarolle, which I had not practiced at all. 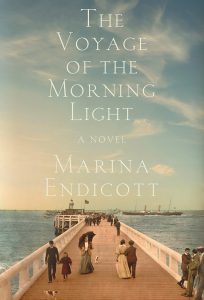 Marina Endicott’s novel The Voyage of the Morning Light is available now.

Marina Endicott’s novel Good to a Fault won the Commonwealth Writers’ Prize for Best Book, Canada and the Caribbean, and was a finalist for the Scotiabank Giller Prize. Her next, The Little Shadows, was short-listed for the Governor General’s award and long-listed for the Giller Prize, as was her last book, Close to Hugh. Endicott lives in Alberta most of the time.

Reverend Dr. William J. Barber II on the Politics of Rejecting
the Poor 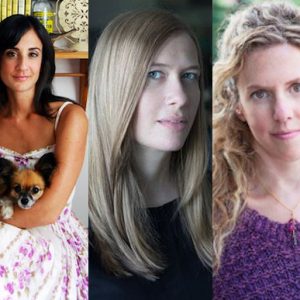