The First Rule of Write Club Is…

Guy Gavriel Kay on Sorting Through Millions of Rules for Writing

Some years ago, The Guardian in England ran what amounted to a Top Ten of Top Ten Tips About Writing. They brought together many different writers’ suggestions.

I will say I dislike these. I think they reflect a trend in the culture to chase gurus and shortcuts, and for some to assume the role of guru. Even more, I feel these listicles undermine the essential individuality of the creative process. But the tips in The Guardian did have some unexpected interest.

Roddy Doyle suggested writers could obtain a thesaurus but should promptly toss it in the garden shed or behind the refrigerator. It was #6 on his list. The great Margaret Atwood, by contrast, said writers do need a thesaurus handy, that writing professionally requires tools. That was #7 for her.

Here were two justly admired authors, giants, really, with completely different views on precisely the same point. What to make of this? Well, it is possible for would-be (or starting-out) writers to cherry-pick their tips, find someone distinguished who says what the start-up wants to hear anyhow. We do that all the time in life, no harm no foul? ‘I write the same way Neil Gaiman does!’

But there might be harm in the very notion that there are rules to be followed in art. Never revise until you are done with the book. Never use a prologue. Short chapters. No sentence fragments. One narrator only. (Yes, I’ve broken all of these.) I’ll argue that those engaged in teaching creativity need to exercise of restraint, and respect for how amazingly varied the processes are whereby people get writing—or painting, or music, or any other art form—done. Some do exercise this caution (the good teachers) but people still chase down these top ten lists, these rules.

There are rules in some contexts. The film script formula of the Three Act Structure may not be the best way to write a particular story, but it is likely to be the best way to pitch and sell it to an executive in the industry—someone following corporate rules (of keeping a job, in part).

Similarly, if one is looking for success in a defined genre, the market usually offers signals as to what it wants. Editors and agents read the tea leaves urgently. But both of these are different from trying to write as well as one can. They are about calculated campaigning for a market response. One famous thriller writer compiled a list of the names of protagonists in successful thrillers before writing his own first book, searching for a common element in naming patterns. The story is that he also charted the page number for the first deaths, first sex scenes… there is no doubt people approach the market this way at times.

And there is nothing wrong with it, at all, or even misguided. It is just a different exercise. Of course I’m aware that if one wants to write full-time, to make a living in an increasingly fragmented literary world, awareness of markets will enter into it, even if markets change and are hugely unpredictable. But this is still not the same thing as writing as best one can. The rules of smart commerce are not identical to the rules of good writing. I call it the Dan Brown Principle, but I could use other names, too.

There’s another worrisome aspect to the market pressure coming down on younger writers today. One author who has brought this issue to the fore is the brilliant Elena Ferrante, whose Neapolitan Quartet has been so much talked about lately. But Ferrante has been writing for decades, and this is the first time she’s had an impact—and no one knows who she is

She told her original editor long ago she’d be the easiest author he ever published, that he need only produce her book and distribute it. She expected no promotion, marketing and she would not do any herself, she did not want to get in the way of her book.

How much more against the current can someone possibly swim?

The presence of the author today, on social media, at conventions, conferences, literary festivals, tour signings, lobbying for awards, even (ahem!) publishing essays as a new book comes out… these do stand right beside our books. And today’s culture seems to want this. The sense of knowing the writer. That aura of ‘authenticity’ writers are supposed to cultivate in person or online.

Ferrante’s approach is so out of step it became newsworthy. She’s in the news because she refuses to be there! She isn’t the first publicity-shy author, but she’s the version for right now, and she’s a challenge to the way things are supposed to be.

As access to thoughts about using a thesaurus from Atwood and Doyle and others becomes google-easy, as self-publishing creates greater numbers of people who want to be instructed how to write, as it becomes more viable for many to teach writing while it becomes ever harder make a living actually doing it, we are, in one sense, more together than ever.

Connection can be trivially simple. Click. Press return. We are all linked online—writers, teachers, students, readers. But on another level, one less talked about, might we be risking a loss of the value of being ‘alone’ in creativity?

Lawrence Durrell, the poet-novelist, once described his writing as ‘art conspiring with introspection against loneliness’. It is a beautiful phrase. Alone can matter in art, it seems to me. Our own way of doing things also matters if we aspire to anything substantial.

Of course if we decide we’re not pursuing the substantial, if we want formulas… well, yes other considerations (and their lists) will emerge, surface, appear, arise, signify…

Guy Gavriel Kay CM is a Canadian writer of fantasy fiction. Many of his novels are set in fictional realms that resemble real places during real historical periods, such as Constantinople during the reign of Justinian I or Spain during the time of El Cid. Those works are published and marketed as historical fantasy, although Kay has expressed a preference to avoid genre categorization. As of early 2016, Kay has published 12 novels and a book of poetry. His fiction has been translated into more than 25 languages. 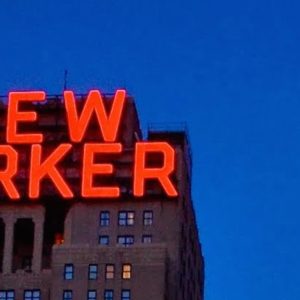 Just the other day, feeling a ripple of melancholy after cleaning out desk drawers and stacking books into orange moving...
© LitHub
Back to top