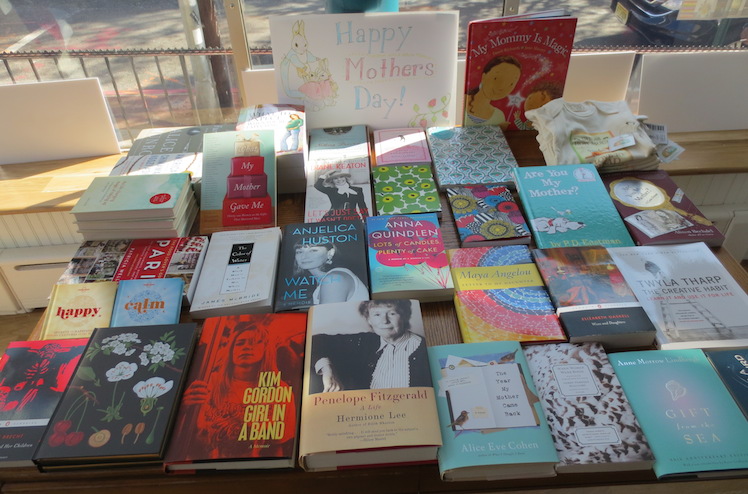 The First Day in the Life of a Brand New Bookstore

Little City Books opened its doors for the first time ever, on May 2nd, 2015 (Independent Bookstore Day, no less). Co-owner Kate Jacobs (along with Donna Garban and Emmanuelle Morgen) gave us an hour-by-hour account of the very first day in the life of a brand new bookstore.

The sun is well up over Manhattan, sky still rosy. It’s going to be a beautiful day but I knew that already since I’ve been keeping a close eye on the weather report. The Mayor is coming at 10 to cut the ribbon. Do we have the ribbon? I think so. Are the scissors sharp enough?

Slip out of the house leaving husband, kids and dog sleeping soundly. Walk downtown through a quiet Hoboken—just a few joggers and dog walkers. The street pears and cherries and magnolias are perfect, only just bloomed. Where am I going to put the Golden Books, since the spinner didn’t come? It seemed like our shelves were half-empty, and then the Bookazine order came in late yesterday and there’s no room for anything. The Poky Little Puppy must have a place.

I love being the first one in the store. It’s magical, having the key to a bookstore. We do not look ready. There are boxes of unshelved books and piles of Little City Books t-shirts all over the New Releases. There’s the bunting to hang and the balloons to blow up. I’m worried about Religion, which is small but can’t really be stuck on a low shelf under Current Ideas, which is on a rolling cart to begin with. Those tomes need a wall, some eye-level gravitas. But no one will buy them and I’m not willing to give up my Poetry and Drama shelf. Also Humor looks kind of weird. I put Wodehouse in Fiction and Sedaris in Essays and Ephron on the Mother’s Day Table. In Fiction I adjust the face-outs. Those Vintage classic editions are so pretty!

Donna arrives. I start doing more important things like shelving and folding. I spend too much time wandering around trying to figure out what to do with silly dog books. Our animal section is smart and slightly academic. But I’m sure someone will buy Shake Puppies. We need way more space for art books.

The morning is flying. Emmanuelle is here trying to figure out how to put the greeting cards into the inventory system. The cards are beautiful. I waste some time looking at them. I find the red satin ribbon, the sharp scissors, the free t-shirt, and the copy of Jane Jacobs’s The Death and Life of Great American Cities (Everyman, lovely edition) and put them by the door.

The Mayor’s chief of staff shows up. He says there was a fire in the assisted living building down the street and the Mayor is held up but she’s coming. I show off our Sports section, since he asked me if we’d have sports books. Which I thought was odd but then our friend who works for MLB gave us a great list and now we have a very cool Sports section.

Mayor Dawn Zimmer arrives. I’m glad it’s a mayor I voted for that’s opening the shop. Hoboken has had some lousy mayors. Dawn’s pretty terrific. The way she stood up to Governor Christie and all. She’s been at City Hall across the street situating all the residents of the assisted living place who were evacuated. Her people come and set up cameras. We all gather around the front door of the shop and she makes a nice short speech about how wonderful it is to have a new independent bookstore in Hoboken, and she cuts the ribbon, and we all clap and cheer and we give her The Death and Life of Great American Cities and a t-shirt and a tote bag. I give her a tour of the store. I sell her a book on urban gardening. It’s a beautiful bookstore! It is a bookstore!!! 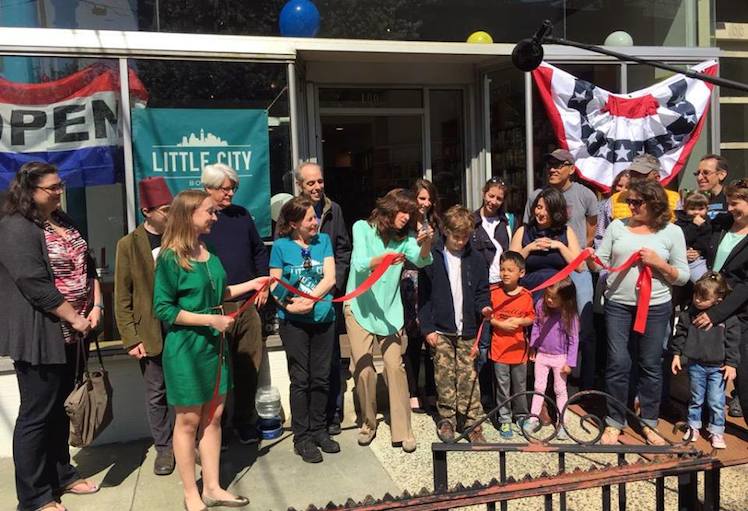 Oh shit it’s Derby Day! Donna pulls every book she can find about a horse. Why don’t we have Black Beauty? Make a note. She’s got Misty of Chincoteague, Mary Oliver’s Blue Horses, Seabiscuit, All the Pretty Horses, and How to Draw Horses. Not bad.

We are selling books like crazy. People walk in beaming. “A bookstore!” they say. “Thank you!” The children are disappearing into the Picture Book and Middle Grade and Young Adult sections. One little boy asks me for the newest Captain Underpants. I don’t have it. He shows me a picture of it on the back of another one: “This one! With the Diaper Baby!” “Ok,” I say, “I’ll make a note.” “No! I don’t want you to make a note!”

Boy finds me behind the register where I’m looking for some string. “You can make a note,” he says grudgingly.

My friend Phil just came in and said he saw the Mayor biking down Bloomfield Street wearing our t-shirt!

It’s amazing you really can sell books to people. I have sold:

The Hoboken Chicken Emergency to an unfriendly man and his son

Jane Gardam’s Old Filth to my friend Nancy. I hope she likes it because she didn’t like Wolf Hall that I recommended before I had a bookstore. Don’t want to strike out twice.

Small boy named Rohan knocks all the Golden Books off their temporary shelf. Where’s my spinner? His mother says he can’t buy his book unless he cleans it up. I clean it up for him and sell her Rosie the Riveter for a girl who’s “5 going on 25.” Our neighbor comes in to pick up her special orders of Oprah’s What I Know for Sure (we foolishly axed it when we had to shrink our order—it went down with Old Yeller) and 50 Laws by 50 Cent. She buys two additional self-help books. I guess having a Self Help section is not such a bad idea.

The store is still packed. The thrill of seeing people walk in the door with delight and anticipation on their faces does not fade. Even though I’m about to fall over and am now barefoot. Bringing a bookstore to a town without a bookstore is a glorious thing. We’ve had lots of dogs in the store—people look so happy when they can bring their dog in. All day I’ve seen Donna and Emmanuelle busily suggesting books and finding out what people want. Donna orders ten Shadow of the Wind for a book club. 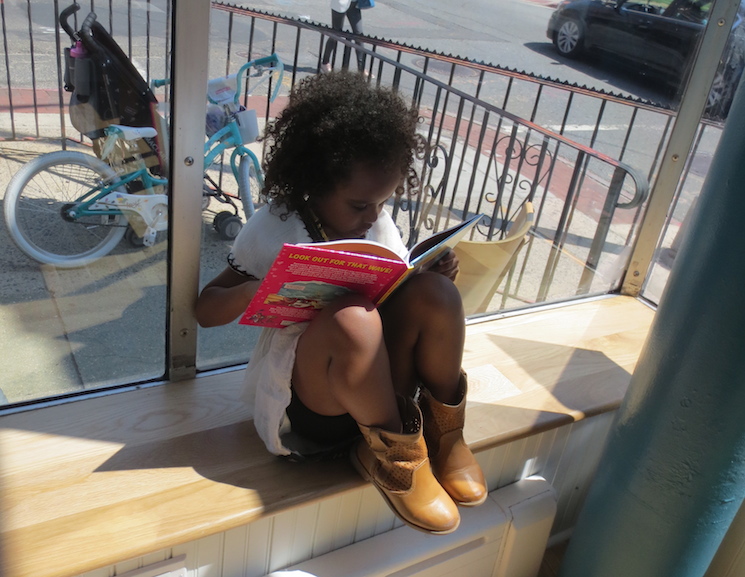 Half an hour to closing. The shelves are distinctly emptier. We’re facing out books like crazy. That face out thing is for real. Flip a book next thing you know someone buys it. I’m facing out all my favorite books. If I had a tutu and a magic wand I could not feel more like a bedraggled barefoot fairy godmother to the booklovers of Hoboken, NJ.

Adam the Aussie garden designer comes in. He wants non-fiction adventure. McCullough’s The Wright Brothers would be perfect and we have it in a box but are not allowed to sell it till Tuesday. He gets Christopher Alexander’s A Pattern Language (yeah!!) and brings Bill Bryson’s At Home in paperback to the register. I sell him the hardcover because the illustrations are much better (that is true).

We are officially closed but three alarming tattooed spiky guys walk in hoodishly. One says to Emmanuelle, “You have any books about drugs?” I slink away. Emmanuelle smiles brightly and suggests Slash’s big fat autobiography. The guy is delighted. So he says unpleasantly, “Got anything about guns?” Emmanuelle plucks a YA book about a 17-year-old boy who fought in World War II off the shelf. He buys both and walks out with a Brand New Book spring in his step, his scary friends trailing behind. Well done, Emmanuelle!! We are now closed!

Donna runs the z-tape and we have a moment of astonished bliss. We sold a boatload of books today. If we can do this once a week we might be able to pay the rent.

The Day Virginia Woolf Brought Her Mom Back to Life 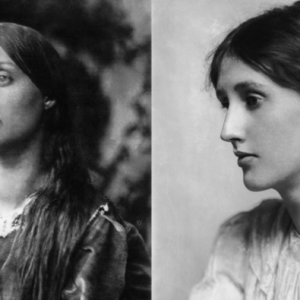 The Day Virginia Woolf Brought Her Mom Back to Life