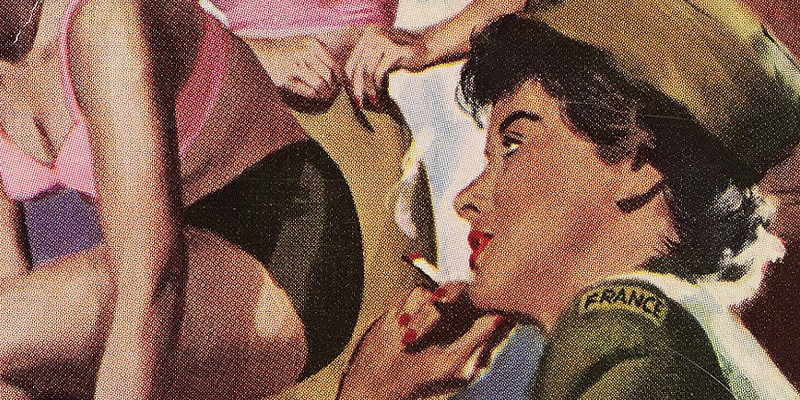 The first bestselling paperback original in the US was a work of lesbian pulp fiction.

Today, dear readers, is Paperback Book Day! It’s the anniversary of the day that the first Penguin paperback was published in England. Good! Personally, I’ll take paperbacks over hardcovers any old day. Don’t @ me! They’re more affordable. They’re lighter. And they don’t wear book jackets that, while lovely, I personally find difficult to hold with the book open.

And what about the paperback original? They’re the renegades of the publishing system. They say: to hell with the way things are done; we’ll have our dessert before dinner! It’s particularly fitting, then, that paperback originals were invented as a sneaky loophole to a contract.

In 1950, a company called Fawcett Publications (a newsstand distributor) had made a deal with the New American Library to disseminate a few of their titles. The fine print prohibited Fawcett from producing their own paperback reprints but obviously said nothing about the unheard of concept we now call paperback originals. Thus Gold Medal Books was born.

To test the market, Fawcett first cannibalized a few pieces from its magazines. One of the very first paperback originals in the US was apparently called What Today’s Women Should Know About Sex and Marriage. One can imagine what it said… It was the ’50s, remember!

But the book that really took off was Tereska Torres’ Women’s Barracks, a fictional account of life among female Free French soldiers in London during World War II (based on the author’s experiences). It’s widely referred to as the first candidly lesbian novel and is credited for popularizing pulp fiction.

It is probably not surprising to you that it also faced obscenity trials in both the US and Canada. (The defense lawyer argued that it was “no franker than that in the Iliad.”) Of course, controversy sells! Over 4 million copies of Women’s Barracks were sold in the United States alone, crowning it our first bestselling paperback original.

Amazingly, Tereska Torres was shocked that her book shocked people. In this incredible interview with Salon, she said, “French literature is full of sexual description—Flaubert and Proust and everything. I felt I was extremely tame! […] Maybe it’s my French outlook on sex. I didn’t think it was sexuality; it was life … That’s the way life is. Life is sexual.”