The Fine Art of Cheating in Baseball

Remembering Red Faber, One of the Last Great Spitballers

The Faber family were local stalwarts late in the 19th and early in the 20th century. They had a son named Urban, which was common as both a first and a last name locally. Common, perhaps, but not much spoken; Urban of course had a nickname. He was known as Red. Urban, unironically, was born on a farm outside town, moved in for a few years after his family built the hotel, then left to attend boarding schools in Dubuque. That brief local residence was enough to get his name now affixed to signs on the US 151 bypass heading into town. Cascade: “Home of Red Faber.” You very well may never have heard of Red Faber, but he’s in the baseball Hall of Fame.

He played ball at school, but not particularly well. He bloomed a couple years later at a small college in Dubuque. From there he went to the old Three-I League, where he threw a perfect game, with only one ball actually reaching the outfield. This attracted the attention of a major league team, the Pittsburgh Pirates, which signed him to a contract, then never put him on the field before assigning him back to the minor leagues.

Being reassigned to the Minneapolis Millers in 1911 was a turning point in Faber’s career. Although gifted and as strong as a plow horse, he had done little that would recommend him at the major league level. When he was sent to Minneapolis, he appeared in only five games; he was injured for the entire time he was with the Millers. At the request of the Millers’ management, Pittsburgh shipped Faber on to Pueblo, Colorado, a team in the Western League. Little wonder—in 24 and a third innings, he gave up 33 hits, ten walks, and 19 runs.

But that brief stopover in Minnesota changed Faber’s career. While recuperating from his injuries in the Millers’ bullpen, he met an undistinguished career minor leaguer named Harry Peaster. Peaster taught Faber how to throw a spitball. Faber, like nearly every pitcher, fooled around with different pitches all the time and had experimented with the spitter, which was then a popular pitch, although to little good effect. This time the pitch took, perhaps because he was injured; to protect his arm, he threw it side-armed and at less than full velocity.

In the waves of experimentation that had followed the liberalization of pitching rules in the nineteenth century, one of the largest ripples was the practice of physically defacing or altering the surfaces of baseballs. Pitchers lathered tobacco, spit, sweat, mud, tar, oil, shoe polish, and just about anything else they could find onto balls before they delivered them. According to Bill James: “People were spitting on the ball, licking the ball, sticking as much of the ball in their mouths as was physically possible, dropping the ball in the mud, scratching it, stepping on it with spikes . . . really making a mockery of the game, plus it was frankly disgusting.”

The application of a foreign substance to a baseball causes disturbances in the airflow around the ball when it is thrown; the disturbance alters the spin of the ball, often in erratic ways. The ball might break sideways, or down, or even sail above its expected trajectory. Usually, though, the action of a spitball is very much like the action of a modern-day split-fingered fastball—coming straight to the plate with little movement, then diving at the very end.

Pitchers had discovered this in the first years of the game, and in the early decades of the 20th century doctored baseballs were an integral part of the game. There is no generally accepted evidence on who first came up with the pitch.

Faber regained his winning form at Pueblo with, a local sportswriter claimed, “an assortment of curves and shoots that can’t be excelled.” He continued to work on his spitter, and by the end of that summer had regained much of his strength. Late in the season, he threw both ends of a doubleheader and closed the year with a four-hitter. Though he regained his fastball, he realized that he should throw the spitter, with less than maximum effort, for the best result.

“A spitter has to be thrown moderately fast and the ball slips away from under the two front fingers of the pitching hand and sails up to the batter rotating very slowly,” he said.

Then it breaks down and to one side. What is there unnatural about that or hard on the arm? I have been using a spit ball for some years and I have never been able to discover. They say it is unsanitary. Well I won’t argue about that.

I never wet the ball but merely the ends of the first two fingers on my right hand. The whole theory of the spit ball is to let the ball slide away from a smooth surface. Wetting the fingers gives this smooth surface. By the time the ball has traveled through the air, met the bat and been driven to some infielder it is perfectly dry. No infielder needs to make an error on such a ball. Of course, I can’t say that some spitball pitchers haven’t misused the privilege. But they didn’t need to and that disposes of the myth that the spitter causes a lot of errors by infielders. It may have done so, but it didn’t need to, properly handled. A spit ball pitcher always chews something. It’s an odd thing, but I have had to experiment with things to chew. Some spit ball pitchers use slippery elm. Slippery elm doesn’t work with me. It’s too slippery and I can’t control the ball. I have tried chewing gum. But that wasn’t quite slippery enough. So I have had to fall back on the good old custom, now much abused, of chewing tobacco. Tobacco juice fills the bill. And I don’t chew it because I like it either. In fact, I never chew except when I am pitching. But it seems to be an indispensable part of my business like a mason’s trowel or a carpenter’s hammer.

Faber came to the major leagues in the middle of what is called the dead-ball era. In its earliest days, baseball was a high-scoring affair. As pitchers became more sophisticated in the early days of the 20th century, the number of runs scored declined steeply. With pitchers aided by their new pitches, including the practice of defacing balls, and by a batting approach that favored scoring single runs at a time, the average number of runs declined to less than four per game. The nadir was reached in 1908, when the average dropped to 3.38 runs. A new, more lively ball was introduced, and hitters began taking a more aggressive approach at the plate. Unsafe, unsavory, or simply unfair, the spitball was finally sentenced to death prior to the 1920 season. Another new rule called for the replacement of balls that had become dirty or defaced. Not long after, and all of sudden, an erstwhile pitcher named Babe Ruth was hitting 50 home runs a year. The game changed dramatically. Home runs increased by two-thirds during this new live-ball era, which lasted until 1947, when the next great change in the game occurred. It had nothing to do with equipment, but with the players. Jackie Robinson broke the color barrier.

Faber was one of the few pitchers to make a successful transition from the dead-ball era to the new homer-happy approach. He was one of seventeen players who were recognized as spitball specialists and exempted from the new rule; they were allowed to continue throwing the pitch for as long as their careers lasted. Faber pitched into his mid-forties, finally retiring in 1933. He won 254 games, a place in the Hall of Fame, and that sign on the outskirts of Cascade.

Faber was the second to last of the legal spitballers. Burleigh Grimes outlasted him by a year, retiring in 1934. That did not, of course, mean there were no more spitballs. The spitter flourished as an illegal pitch from the time it was banned up to today, despite the scrutiny of high-definition cameras that capture every eyeblink and muscle twitch on the field. If a pitcher wants to cheat, and isn’t blatant about it, there is very little anyone is going to do to stop him.

The most notorious spitball pitchers used their reputations to their advantage. Preacher Roe, who had great success mainly with the Brooklyn Dodgers in the late 1940s and early ’50s, made the spitball his go-to pitch after an injury diminished his fastball. He had a well-established routine when preparing to throw the spitter, bringing his hands up to his cap and spitting onto them, then transferring the spit to his belt and finally his fingers. When hitters learned what he was doing, he would throw a fastball off the same routine, using the threat of the spitter as effectively as the spitter itself.

Roe admitted his use of the spitter only after he retired. A generation later, Gaylord Perry, after a decade of suspicions, inspections, and denials, and barely halfway through a long career, wrote a memoir called Me and the Spitter: An Autobiographical Confession. And then immediately went back to denying he had ever done anything untoward. The question of whether he did or didn’t worked so well to his advantage that he became the winningest spitballer in history. Let me repeat: they’re all bastards, you know. 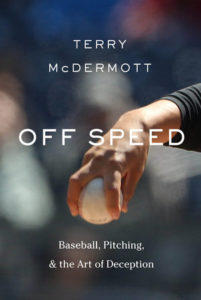 Excerpted from OFF SPEED by Terry McDermott. Copyright © 2017 by Random House. Excerpted by permission of Pantheon Books, a division of Random House LLC. All rights reserved. No part of this excerpt may be reproduced or reprinted without permission in writing from the publisher.

Terry McDermott is a former national reporter for the Los Angeles Times and the author of Off Speed: Baseball, Pitching, and the Art of Deception; The Hunt for KSM: Inside the Pursuit and Takedown of the Real 9/11 Mastermind, Khalid Sheikh Mohammed; 101 Theory Drive: The Discovery of Memory; and Perfect Soldiers: The 9/11 Hijackers—Who They Were, Why They Did It. A native of Iowa, he now lives in southern California. 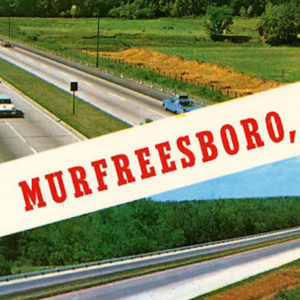 The first time I visited Murfreesboro was this spring, when I was invited to participate in a young adult book festival...
© LitHub
Back to top
Loading Comments...