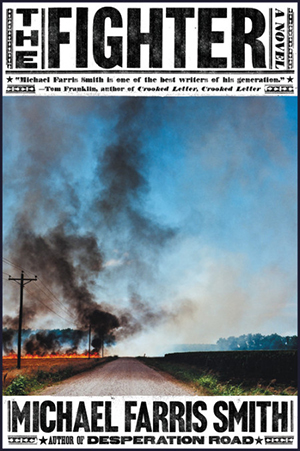 The following is from Michael Farris Smith's novel, The Fighter. As a child, Jack Boucher bounces between foster homes all over the Mississippi Delta—until he meets Maryann. But after her death, Jack is confronted with a new set of issues: the house being repossessed, a car crash, and a vicious bookie. Michael Farris Smith received the Mississippi Author Award in 2014. His previous books are Desperation Road, Rivers, and The Hands of Strangers.

When he was two years old the boy was dropped off at the donation door at the Salvation Army secondhand store in Tunica wearing nothing but a sagging diaper. A Planet of the Apes backpack stuffed with more diapers and some shirts and mismatched socks and little green army men was dropped on the ground next to him. Then a hungover woman banged a scabbed fist on the metal door and a hungover man blew the car horn and she ran around and got in as the child watched with a docile expression. Out of the car window the man called out some sort of farewell to the child that was lost in the offbeat chug of the engine and then the foulrunning Cadillac rattled out of the gravel parking lot, leaving the child in the dustcloud of abandonment.

The door opened and two women in matching red Salvation Army t-shirts stared down at the boy. Then they looked into the parking lot at the still lingering cloud. Out into a gray morning sky. They glanced at each other. And then one said I guess we’re gonna have to hang a sign next to the one that says no mattresses that says no younguns. The other woman lifted the boy and held him up beneath his arms as if to make certain he was made of actual flesh and bone. When she was satisfied she hugged the child close and rubbed her hand across the back of his head and she said I pity those who have to live behind me in this weary and heartless world.

The police were called and while they waited the women washed the boy in the bathroom sink with paper towels and hand soap. Filthy feet and filthy hands and the diaper was two changes past due. After they had wiped him clean and filled the trash can with dirty paper towels the boy stood naked and fresh on the smooth concrete floor of the bathroom and they admired his innocence and beauty. He was then dressed in a new diaper and a Spider-Man shirt taken from a rack in the kids’ section. The boy did not cry and did not talk but instead sat satisfied between the women on a tweed sofa marked fifteen dollars as if he had already decided that this was his new home and he was better off.

He was better off but this was the beginning of a childhood spent in the company of strangers. The next ten years saw him move from one Delta town to the next. Four foster homes and two group homes. Five different schools. A handful of caseworkers. Teachers whose names he could not remember and then stopped trying to remember because he knew he would not be in their classrooms for long. The steady and certain build of restlessness and anxiety in this child who was certain neither where he had come from nor where he was going.

“After they had wiped him clean and filled the trash can with dirty paper towels the boy stood naked and fresh on the smooth concrete floor of the bathroom and they admired his innocence and beauty.”

When he was twelve years old the assistant director of the group home told him to gather his things. Again. He sat on the bench seat of a white van with the home logo on the side and he watched the fields of soybeans and cornstalks with sullen eyes as he was driven from the sleepy, bricked street town of Greenwood to his fifth foster home. Moving northwest and closer to the great river, to the fringes of Clarksdale, the once bustling Delta hub of trade and commerce that now wore the familiar faded expression of days gone by. His eyes changed when the van pulled into the dirt driveway that led to a two-story home. A white antebellum with a porch stretching across the front on the bottom and top floors. Flaking paint on the sun side and vines hanging in baskets along the porch with their twisted and green trails swaying in the wind. A woman sat in a rocker and she rose to meet them. She wore work gloves and she pulled them off and tossed them on the ground as she approached the van as if readying herself for whatever may be climbing out.

She took him to his upstairs room and opened the dresser drawers to show him where he could put his things and he told her there was no use.

I won’t be here long enough to mess up the covers on the bed.

Sure you will, she answered.

No I won’t, he said. A twelve-year-old certain of the workings of the world.

Are you gonna run away?

Because unless you run away this is where you live now.

So I know, she said.

You don’t know nothing, he said and he walked out of the bedroom and down the stairs and out into the backyard.

She stood at the window and watched him between the slit in the curtains. He did not stop in the backyard but crossed it and walked out onto the dirt road that ran on and on between the rows of cotton. The sun high and a short shadow followed him. She did not chase. She stood in the window and watched until he was nearly out of sight and she was one step toward the door to run after him when he stopped. A tiny figure in the distance.

He stopped and stayed in the same spot for several more minutes and she could not know that he was talking to himself. Telling himself I don’t wanna do this no more. I don’t know why I can’t have somebody. With the space between them she could not have noticed that he looked back at the big house and said that place right there don’t want me neither and that woman can’t catch me. I’m gonna take off running and she won’t never catch me. Won’t nobody. I don’t wanna do this shit no more. She could not have heard him or seen him with any detail but she waited. Only could see that he had stopped. She whispered a prayer without moving her lips as if even the slightest flutter would spook the boy and send him fleeing on furious and reckless feet. He stood still talking to himself and she stood still whispering a quiet and motionless prayer. And then from the distant sky a hawk flew toward the boy. It flew low and its wings were spread wide and when it reached the vicinity of the boy it swooped and seemed to hold there out in front of him. Begging the boy to admire its eloquence. Begging the boy to notice something other than himself and his troubles. Begging the boy to think of something other than running from that woman. The hawk rose and fell again and the boy saw it and his eyes followed the hawk as it turned long and graceful curves in the bluewhite sky. From the window Maryann spied the hawk and she shifted her eyes from sky to land, waiting to see what the boy would do. The breath she had been holding was let go when the hawk turned toward the house. And the boy followed.

From The Fighter. Used with permission of Little, Brown and Company. Copyright © 2018 by Michael Farris Smith.

Why Do We Turn to Stories in the Midst of a Disaster? 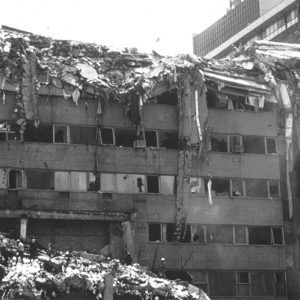 Why Do We Turn to Stories in the Midst of a Disaster? Most people I know consider themselves sophisticated enough to pay no heed to end-times prophets, but catastrophe montage...
© LitHub
Back to top