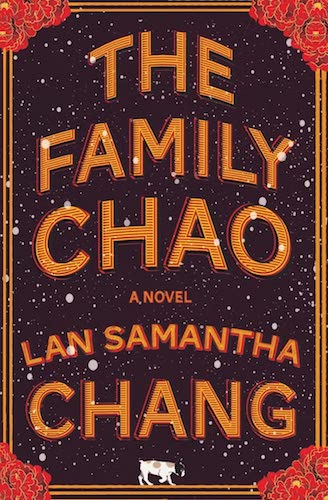 The following is excerpted from Lan Samantha Chang's new novel, The Family Chao. Chang is the award-winning author of the collection Hunger and the novels The Family Chao, Inheritance and All Is Forgotten, Nothing Is Lost. A recent Berlin Prize Fellow, she also has received grants from the National Endowment for the Arts and the John Simon Guggenheim Foundation. Chang is the first Asian American and the first female director of the Iowa Writers' Workshop. She lives in Iowa City.

Entering the Fine Chao Restaurant through the back door, James passes, on his left, the stairs to the basement, and on his right, the restaurant office with its old television murmuring. Next is the kitchen, where nothing has changed in fifteen years. There’s the bulletin board covered with scraps of paper, yellowing with age. These are notes Leo and Winnie Chao wrote to each other over the decades. When they fought, these missives were a primary method of communication. (The other was to use the children as messengers.) The notes are written sometimes in Chinese and sometimes in English in order to confuse the workers. There’s also a schedule, now eighteen years old, of Dagou’s high school orchestra rehearsals. From a time even before then, from before James was born, there’s a list of frequently requested items in English and Chinese:

Crab rangoons (What are these? Winnie, their mother, annotated in Chinese. Their father wrote underneath, Wontons filled with cream cheese.)

Wontons and noodles together in the same soup

Chop suey (What is this? Leo wrote. I don’t know, Winnie wrote.)

Anything with shrimp (The rest of them can’t eat shrimp, she annotated. Be careful.)

Anything from the deep fryer

Anything with sweet and sour sauce

Anything with a thick, brown sauce

Meat on the bone (except ribs or chicken wings)

In a small fridge for employees, there are containers of stir-​fried vegetables kept separate by O-​Lan, the woman from Guangzhou who is one of three outside kitchen employees, and who doesn’t eat meat; beers for JJ, the second chef, and for Lulu, the other server (who after years of silent courtship have unexpectedly gone to San Francisco together over the holidays); and Dagou’s personal stash of pork with jiu cai and noodles. James heats a pile of pork and noodles on the stove. He’s starving.

As he transfers the food into a bowl, a pounding noise comes from below. It’s the sound of his father, Leo, Big Chao, coming up the stairs—​footsteps that reverberate and thump with the authority of a man larger than he actually is. To these footsteps is added deep and resonant grumbling, profanity growing more audible until, when he reaches the top of the stairs, a full question detaches itself and sings into the kitchen in a ringing baritone:

“Who the fuck is coming to clean up half an hour after close?”

James abandons his dinner, edges into the hallway. “Baba, it’s me.”

He’s the only son who still calls Leo “Baba,” which Dagou shortened to “Ba,” and Ming changed to “Dad.” Sometimes his brothers refer to Leo as “Aw, Gee, Pops”—​this is one of the only jokes they share.

“Oh, it’s you!” Leo yells, emerging into the hall. “I smelled those disgusting jiu cai noodles and thought it was your worthless brother. But it’s you.”

He grins, delighted, and claps James on the shoulder.

He’s a sturdy, vigorous man with tadpole eyes and a dark, strong-​featured face thickened by food and living. James catches a whiff of cooking grease, pipe tobacco, and stale clothes.

“Your hands are cold,” he says, pushing away an image of the man in Union Station.

“I was in the basement, freezer room! Picking out something for tomorrow.” Over Leo’s shoulder is slung a restaurant delivery bag.

“You shouldn’t go down there when no one else is in the building.” The freezer door locks automatically. “It’s not up to code, Baba.”

“It’s fine,” his father says. “Jerry Stern worked his magic with the city inspector. I told your big brother, study law, but he doesn’t listen, majors in music. Now Baby Mozart’s paying off his loans cooking for Americans.” Like the rest of the community, Leo uses the term “American” to describe any outsider. The term is half ironic, half utilitarian.

James is disappointed Dagou isn’t here to welcome him home. He doesn’t dare ask his father where Dagou is, doesn’t want to provoke him.

But Leo, guessing his thoughts, says, “Your worthless brother’s making out with his new girlfriend. Or getting ready for his big showdown at the nunnery tomorrow.” He gestures to the hall. “Come to my office! I got something strong for you.”

The office is crammed with detritus from thirty-​five years of business, including an ancient adding machine and a naked fake Christmas tree. James sits in his mother’s old chair, his father in the recliner. Leo catches James’s eye, shoots him a flare of approval. Despite all Ming has just said, James feels a metabolic, answering spark of happiness, kinship, recognition.

“Try this.” Leo Chao holds out a tumbler to James.

“Did you get this from those guys you know in Chicago?” James asks, eyeing the unmarked bottle on Leo’s desk.

“Yeah, this is real thing.”

As James lifts the glass, a hideous, pungent odor of fruity, rotten socks pervades his sinuses. He squeezes his eyes shut, sips, and lets the awful taste spread over his tongue.

“Ha, look at that!” His father gestures at the television.

There’s nothing on the screen except a fenced patio with an open gate. Then an animal lumbers onto the patio, sniffing at the fence. It’s a yearling bear, burnished brown—​there’s no mistaking its thick, furry body, the bulk of its rear end, its heavy yet clownish, rolling walk.

A small, stocky black creature torpedoes down a staircase. The creature barks wildly, growling and snapping at the bear, which, after a moment’s stunned confrontation, rises up on its hind legs in dismay. Like a black streak, the dog chases the bear up and down the patio, lunging and nipping at its heels. Panicking, the bear clambers over the fence. The dog, tail up, remains in the patio.

“Ha!” Leo emits a deep belly laugh. “You see that? Just like Alf. French bulldog, best breed in the world!”

James hands him back the tumbler. “Baba,” he says, “you know Dagou isn’t worthless. He can really cook.”

In the pause that follows, James wonders if he’s angered his father. But when Leo Chao speaks, his tone is genial.

“Maybe not worthless,” he says, “but he has an inferiority complex. You American-​born Chinese so timid and brainwashed, will do anything for a woman who’ll give you a good lay.”

Did his father just change the subject, or is it all part of the same argument? James doesn’t know. Leo hands the tumbler back; James takes another tiny, terrible sip. He is timid with girls. Is this why he’s halfway through his freshman year in college and still a virgin?

“All you ABCs! You think since you’re not here first, since you have different eyes and dicks, you’re not good enough for fucking around. You got it backwards. We came to America to colonize the place for ourselves. That means spreading seed. Equal opportunity for fucking. You know what’s the biggest disappointment of my life? Seeing my oldest son pussy-​whipped by one white woman.”

He frowns at the TV; its dim light flickers over his features. “My stinking son. Brainwashed by his mother and teachers. They say, ‘You’re special,’ ha! ‘You can do anything you want!’ Nobody can do anything they want. Do you think I want this dog’s life? No, I do what I have to do. But my oldest son? He’s trying to find himself. What’s to find? Decides to be musician. Then he leaves the East Coast with his tail between his legs. He’s wasted years of life.”

“He’s amazing in the kitchen,” James says. They watch images move across the screen. “Baba,” he says, “if you can be anything you want to be in America, then why can’t you do what you want? And what if you don’t want to be big and rich? What if you want to be small?”

“Is that what you want?” snorts Leo.

James struggles. How to explain to his father what he wants? It’s something he has only just begun to put into words, and only to himself.

“I’m not ambitious like Ming,” he says. “I don’t want to be super-​rich or buy expensive real estate. I’m not ambitious like Dagou, either. I don’t need to be as creative as he is, or to make people happy. It’s not that I don’t want to be interested in my job. I do want to help people. But I mostly want—​I want to feel small. To be a small piece in the big mystery of everything.” He stops to think, trying to explain his own curious desire. “I want to get married and have kids, and a dog. I want to walk the dog in the morning, go to work, and come home at night. Mostly what I want is—​well, an ordinary life.”

“An ordinary life.” Leo smiles in the half dark. “Blood sacrifice!” he yells, startling James. “I came over in nineteen seventy-​two; a pioneer, breaking land. I sacrificed myself—​all so my sons could be magnificent! I did all this—​only to be dog father. Is anyone grateful?”

“I’m going to die dog father. I’m going to die!” Leo yells, glaring up at James. His bellow thins to a theatrical mew. “How is it possible I’ll die so far away from home?”

The face of the man at the train station appears before him. James closes his eyes. “Don’t say that, Baba.”

“No, Baba,” James says. Although he knows this is impossible, he believes it. “You’ll never die.”

“Not me.” Leo smiles. “Ah, James. My good boy. Not my most accomplished boy, not my most talented boy, but you’re my boy, you love me.”

Elisa New and Richard Blanco on the Diversity of American Poetry 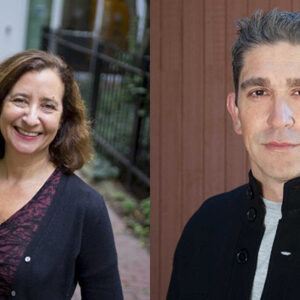 Elisa New and Richard Blanco on the Diversity of American Poetry On today's episode of The Literary Life, Elisa New, creator, director, and host of PBS’s Poetry in America series, and Richard...
© LitHub
Back to top