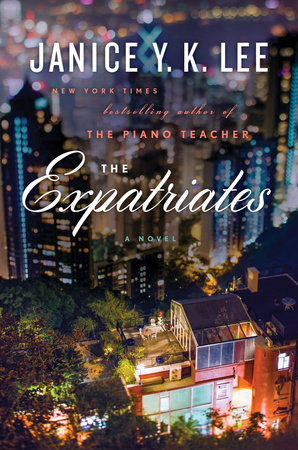 The following is from Janice Y. K. Lee's novel, The Expatriates. Janice Y. K. Lee was born and raised in Hong Kong. A former editor at Elle and the author of The Piano Teacher, she lives in New York with her husband and four children.

The new expatriates arrive practically on the hour, every day of the week. They get off Cathay Pacific flights from New York, BA from London, Garuda from Jakarta, ANA from Tokyo, carrying briefcases, carrying Louis Vuitton handbags, carrying babies and bottles, carrying exhaustion and excitement and frustration. They have mostly been cramped in coach; a precious few have drunk champagne in first; others have watched two movies in business class, eating a ham-and-Brie sandwich. They are thrilled, they are homesick, they are scared, they are relieved to have arrived in Hong Kong—their new home for six months, a year, a three-year contract max, forever, nobody knows. They are fresh-faced; they are mid-career, hoping for that crucial boost up the ladder; they are here for their last job, the final rung before they’re put out to pasture. They work at banks; they work at law firms. They make buttons, clothing, hard drives, toys. They run restaurants; they are bartenders; they are yoga teachers; they are designers; they are architects. They don’t work. They are hoping to work. They are done, done, done with work. They arrive in January, after Christmas; they arrive in June, after the kids get out from school; they arrive in August, when school is about to start; they arrive whenever the company books their ticket. They come with their families or with their wives or their boyfriends, or resolutely single, or hoping to meet someone. They are Chinese, Irish, French, Korean, American—a veritable UN of fortune-seekers, willing sheep, life-changers, come to find their future selves.

These days, they always come by air, disgorged from the planes that encircle Chek Lap Kok airport. The new expatriates wait in line, somnambulant in the fluorescent light, with their pallid skin and greasy hair, wondering if jet lag will ever be less horrendous. They present their passports, clear immigration, collect their bags, and emerge from the terminal to scatter—disappearing into the Airport Express train; queuing up for double-decker buses, taxis; stepping into the back of black Mercedes sedans bearing the emblem of the Mandarin Oriental, doors opened by white-capped chauffeurs. They are swept away and driven along the highway, so clean, so new, past villages that are just remnants of what was there before all the buildings went up, those giant complexes built to house the ever-burgeoning local population, those people who will be their colleagues, their employees, their employers, their drivers. All the expats disperse, are quickly absorbed into their new home, each quickly becoming just one more face in the crowd.

The new expatriates are tired. They have arrived, but they are not sure to what. The immediate journey has ended, but the longer one has just begun. They rest their heads on the window of the bus, on the leather headrest in the car, on the velour of the train seat, on the way to their bed in Chungking Mansions, at the YWCA, at the Four Seasons, at a friend’s house, at their serviced apartment, at the house on the Peak that has been leased for them. They quiet the children, they drink a bottle of water, they drum their fingers on the seat. Hong Kong flashes frantically by. The road stretches long before them. They are exhausted. Their eyes close, and they dream of what lies ahead.

A slow-roasted unicorn. A baked, butterflied baby dragon, spread-eagled, spine a delicate slope in the pan. A phoenix, perhaps, slightly charred from its fiery rebirth, sprinkled with sugar, flesh caramelized from the heat. That’s what she wants to eat: a mythical creature, something slightly otherworldly, something not real. A centaur. Yes, the juicy haunch of a centaur. Mercy lies in bed, not quite asleep, not quite awake, sheets crumpled around her, feeling the gnawing hole in her stomach, relishing it, savoring it.

The sun streams in through her small, smudged window. By the looks of it, it must be past 11:00 a.m., a time when most people—respectable people, people with jobs—have been at work for several hours and may already be contemplating what they should eat for lunch.

She can hear the muted sounds of the streets below. Sheung Wan, an area too quickly being discovered by the rent-hikers—those young, industrious careerists in their well-cut suits and shiny leather shoes who leave at eight thirty in the morning with wet hair and sheaves of papers shoved in briefcases. They have discovered this relatively cheap neighborhood, a short walk from Central, and have succeeded in slowly gentrifying it. The rent-hikers live among aging locals who view their encroachment with bemused silence. Every morning they pass the crazy charwoman in the lobby who barks incomprehensible Cantonese invectives at them as they walk through, fingertips pecking on their phones, pretending not to notice. These superbly energetic men and women have tried to get the charwoman replaced, started a petition, which was photocopied and slipped under Mercy’s door for her signature, but all their efforts have come to naught. The crazy woman stays all day and night, sitting on her plastic stool, bucket and mop beside her, shouting at them and at herself. It is believed she lives in a little room off the lobby, but no one has been able to ascertain the truth. No one has ever seen her do any cleaning, or leave, or come back. It’s one of those Hong Kong mysteries, where she might be the landlord’s demented aunt, a homeless person who has made the lobby her home, or indeed an insane millionaire who owns the building. All this conjecture and information is conveyed through messages posted in the elevator. Then suddenly one day, a direction to an online message board, to which they all migrate, leaving the wall in the elevator mercifully blank. All that remains of the shrill, slightly hysterical dialogue is a strip of yellowing Scotch tape on the plastic wall.

Mercy is hungry. She should eat. But she wants to eat a centaur’s thigh, roasted over a bonfire, turned on a spit by fairies, their sparkly little faces perspiring from the heat. She is certain she will not find this when she ventures out into the small, tight streets around her. They are filled instead with equally improbable things: shiny cow innards; disembodied pigs’ heads with floppy ears, stacked up in bloody piles; dried seahorses in burlap sacks. She does not find the food grotesque, instead is bewildered by how one begins to eat such items, existing as they do in such peculiar and indeterminate forms, or indeed, alive, or in quantities that would feed a village.

When she gets up, she determines, she will turn on her space heater to warm the chill of the December air. She will take out a head of organic Boston lettuce from her little refrigerator and pull apart the leaves, soak them for ten minutes, then transfer them into a spinner, where they will be centrifuged, and the sandy water discarded. She will toss the leaves in a wooden bowl with a micro spray of olive oil, a drop of balsamic vinegar, the insanely expensive balsamic vinegar that she bought at the gourmet store, so viscous it drips in a slow, thick stream. A tomato. A Persian cucumber. These will emerge, pristine, from her tiny refrigerator, chilled, perfect. She will slice them thinly and fan them into beautiful patterns, a vegetable mandala, courtesy of the mandoline, a feast for the eyes. She will hand-crumble Parmigiano Reggiano onto the top, and then, from on high, she will brandish the mill and grind coarse crystals of pink salt from the Himalayas into fine, sparkly shavings that will float, like snowflakes, onto the pale green surface of her salad.

She will bring the salad to the table by her bed, which she will have set with a scalloped linen placemat she bought on a trip to Hanoi, with a matching napkin, and a glass with a bottle of Fiji water just next to it, ready for pouring. She lives in a two-hundred-square-foot studio, but she does not have to live like a savage.

Mercy will sit on the bed and take up her instruments: her heavy silver fork and knife, stolen from Gaddi’s restaurant on a memorable night in better times. The lettuce, slightly glossed with oil, will yield as she presses the tines of her fork into it, the hole bleeding a slightly darker green as she breaks the cells of the leaf, violent death in its own microscopic way. From there, she will lift it into her mouth, a light sliver on her tongue for an instant before her teeth grind it into a small, slippery pulp that will slip down her throat. She will swallow. She will cut another piece. She will put it in her mouth and chew again. Swallow. Drink water. Drink more water. Spear another leaf. Repeat.

It is important to do things right. Otherwise, when you live alone, it can devolve very quickly. Stand on ceremony. Observe the rites. That’s how you get through the day.

From THE EXPATRIATES. Used with permission of Viking. Copyright © 2016 by Janice Y. K. Lee. 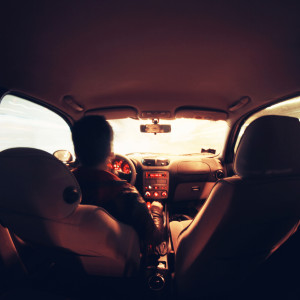 How I Gave Up On the Great American Novel and Got a Book Deal 1. Stay Alert, Arrive Alive A few years ago, I realized something: writing had made me a reckless driver. During a single...
© LitHub
Back to top