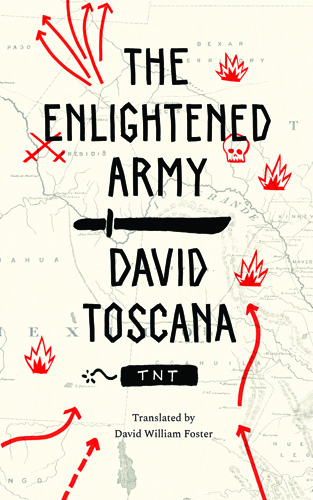 The following is from David Toscana's novel The Enlightened Army. A contemporary Don Quixote, the novel's protagonist is a patriotic Mexican schoolteacher who, feeling personally and politically slighted by the Mexican-American War, organizes an army to reconquer Texas for Mexico. David Toscana is one of Latin America’s leading contemporary writers, and his books have won several prestigious awards, including the Casa de las Américas Prize for The Enlightened Army.

There are three domino tiles lying on the table. A cloud of smoke rises up around the four players; it’s going nowhere, no breeze comes in through the windows. Someone huffs impatiently. Fatso Comodoro looks back and forth between his seven tiles and the three lying on the table. It’s his turn, but he doesn’t make a move, he’s afraid of a wrong play; he’s seen these men play and knows they put a lot of effort into each game, they concentrate, they raise their arms if they win, they spin the orphan tiles on their metallic centers, they anticipate their opponent’s moves, they barely talk because the game is for drinking, for smoking, not for talking about the events of the day or work. It can’t be all that difficult, there are seven tiles and I’ve got to choose one. He likes the white one for its purity, because it’s the easiest to interpret; but Fatso Comodoro knows it’s not a question of taste.

The game has a logic, rules, and they’ve got to be respected. He feels better going to the kitchen and bringing some beers, emptying the ashtrays, asking if they want anything; he prefers to sit in a corner and watch, just watch. But one of the men, Mr. Ibáñez, left town and this is a game for four people, Matus told him, you’ve got to learn. Matus spent all Sunday morning explaining the science behind these twenty-eight tiles to him. Never let your opponent see them, don’t even let him imagine them. That’s difficult because Comodoro’s hands are clumsy and several times while practicing he knocked a tile over and left it exposed to enemy eyes; which is why he now dries the sweat from his fingers on the leg of his pants.

Santiago blows a cloud of smoke toward the center of the table. This isn’t chess we’re playing here, Fatso.

You’re not supposed to talk, Román rises from his drowsiness, you’re giving him tips.

Damn Ibáñez for deciding to go off to his ranch, he’s telling us to go to hell, Santiago says, what are we going to do now? There ought to be a law against people leaving their friends in the lurch, this was a four-way agreement, and what’s the upshot? Ibáñez is likely sitting right now on a bench with nothing to do, somewhere where everything goes dead right after dinner.

Comodoro can’t hear anything, he’s studying the white tile, the Immaculate Mother of God tile and pray for us blessed art thou among all tiles and women and damn the obligations of this game because I want to play the white tile and sometimes you’ve got to do what you want and not what everybody else wants, and maybe with a bit of luck this is the right move to make, the one an expert winner would play. He raises his hand and slowly advances his thumb and forefinger to pick up the chosen tile.

Finally, Santiago says, although at this rate we’ll be here until tomorrow. Comodoro places the tile next to the row ending in three with a forceful smack to the table, as he’s seen the men do when they’ve won a game. No one speaks; the vision of the two tiles that don’t match leaves them thunderstruck. Comodoro guesses he’s made a masterful play and now it’s the others’ turn to meditate about the next move as they wipe sweaty hands on their pants.

It’s stillborn, Santiago says, all this waiting and it’s stillborn. Comodoro looks at the men’s eyes; they are not directed at the game, but at him and they’re looking him up and down. He would like to take the tile, put it back with the other six and pretend no one saw it, choose again, maybe this time getting it right, with the Immaculate Lady left for a later move; but they saw it, and Matus told him about the secrets they had to keep. Maybe he could just flee, he thinks about fleeing, leaving the men, going far away like Mr. Ibáñez, if only the brave had the right to flee.

Matus takes a swipe at the tiles and knocks some of them to the floor. Jerk, he gets up and goes over and yanks Comodoro by his wispy hair, what’s the use of everything we talked about? The ashtray also bites the floor. They’ve got to sweep it up, look for the butt that was still burning. Comodoro tries to say something, he doesn’t like being called a jerk, his teacher told him he shouldn’t take insults from anyone. Now not only are his hands sweating, his forehead is covered in sweat, his neck is wet; it’s hard for him to articulate when he’s angry. He falls to the floor and crawls around until he finds the Immaculate Lady; there she is, next to the leg of a chair. He picks it up and stands up. He tries once again to say what he’s feeling and can barely pronounce the word unfair. Unfair, he repeats, unfair and the tile is a communion wafer that Comodoro raises with both hands.

From The Enlightened Army. Used with permission of University of Texas Press. Copyright © 2019 by David Toscana. 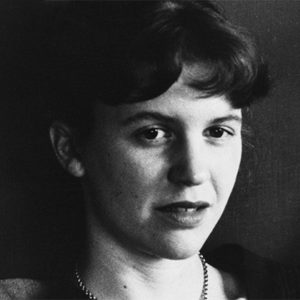