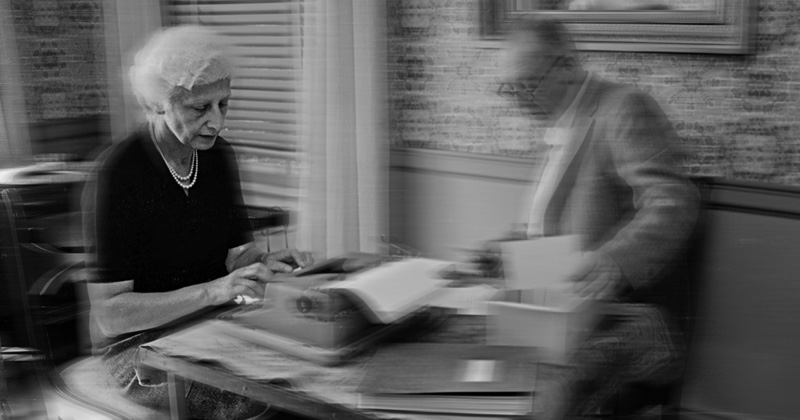 The Enduring Enigma of Véra Nabokov

Why We Can't Stop Trying to Figure Her Out, in Fiction and Biography

“The more you leave me out,” Véra Nabokov told Brian Boyd while he was researching his two-volume biography of her husband, Vladimir Nabokov, “the closer to the truth you’ll be.” Not that biographers could be trusted to follow her dictum: Véra destroyed all her letters to her husband; she blacked out her contributions to joint postcards to Vladimir’s mother. In Véra (Mrs. Vladimir Nabokov), Stacey Schiff characterizes this destruction a question of “merit”: “His words, even his private ones, had a value for posterity. She felt strongly that hers did not.”

But when Schiff describes Véra’s reaction to Vladimir’s 1937 affair with Irina Guadanini—not his only infidelity, but the only one that threatened his marriage—another reason surfaces. “Until confronted with the fact that her husband’s 1937 letters to Irina had survived,” Schiff writes, “she was ready to deny that any such affair had taken place.” Schiff also remarks on Véra’s contributions to a published collection of Vladmir’s correspondence. The four letters Véra asked the volume’s editors to use were “adoring”; they had also been sent while Vladimir was courting Irina. It was, Schiff writes, “a bold, unblinking strike on all other versions of their story.”

What other “versions of their story” Véra’s missing letters to Vladimir might suggest, we will never know. And yet: Her careful self-erasure creates a kind of black hole, a magnetic absence. Véra may well have been driven to destroy her letters to Vladmir by a desire for privacy—of which there is ample evidence: when Véra was pregnant with their son Dmitri, she concealed her condition from many of the couple’s closest friends through “careful dress and posture and silence.” But her reserve piques, rather than dissuades, interest. And Véra, intelligent as she was, cannot have been ignorant of this possibility.

Into this absence steps Adrienne Celt’s Invitation to a Bonfire, a novel that imagines an affair between a young Russian refugee, Zoya Andropova, and a Nabokov-like novelist, Leo (Lev) Orlov; Lev’s wife is Vera, without the accent. Celt introduces intrigue of a more immediate sort—a murder; a second death that occurs under “hotly debated circumstances”—but the novel’s true interest is power; specifically narrative power—one of the few kinds available to women in the first half of the 20th century.

In the pantheon of literary marriages, Véra Slonim’s to Vladimir Nabokov is remarkable for the consistency of its mutual devotion: his to her; her to his work. The Nabokovs were married for 52 years, and Boyd writes that “they seemed like young lovers even in their sixties and seventies.” No less astounding is the fact that, until 1968—that is, until Véra was 66 years old—Vladimir did not employ a regular secretary, leaving to his wife the bulk of the typing: not only his novels (which needed to be copied out in triplicate), but his correspondence—and this is to say nothing of the miles she drove, the contracts she negotiated, the meals she prepared.

In 1946, when Vladimir was suffering the stultifying effects of instructing undergraduates in “rudimentary [Russian] grammar” at Wellesley, Véra convinced her husband to propose a Russian Literature class he was eager to teach but unenthusiastic about prepping by “promising to write the lectures herself.” Two years later, on the morning of the couple’s move from Massachusetts to Ithaca, New York—Vladimir had accepted a position at Cornell—Véra shuffled her husband off to a friend’s apartment while she settled things at their own. “I will never get this place cleaned out if he stays here,” she explained.

“In the pantheon of literary marriages, Véra Slonim’s to Vladimir Nabokov is remarkable for the consistency of its mutual devotion: his to her; her to his work.”

At Cornell, when Vladimir caught a bug that triggered “an excoriating attack of intercostal neuralgia,” Véra took over his classes, even though she had bronchitis. When she wasn’t lecturing to the class, she was quietly ensuring it ran smoothly, “handing out papers, writing words and phrases on the blackboard.” To his students, Vladimir referred to his wife as “my assistant,” so that at least one Cornell undergraduate, later asked to identify her, averred, “That wasn’t his wife, that was his mother.” In 1967, when Véra traveled alone from their home in Montreux, Switzerland, to New York, Vladimir’s sister was summoned from Geneva to, among other things, make his morning coffee. “He simply did not even know,” Boyd notes, “how to make the coffee he drank every day.”

In the first volume of his biography, Vladimir Nabokov: The Russian Years, Boyd lists the roles Véra assumed for her husband: “wife, muse, and ideal reader; his secretary, typist, editor, proof-reader, translator, and bibliographer; his agent, business manager, legal counsel, and chauffer; his research assistant, teaching assistant, and professorial understudy.” Schiff puts it slightly differently: “From the list of things Nabokov bragged about never having learned to do—type, drive, speak German, retrieve a lost object, fold an umbrella, answer the phone, cut a book’s pages, give the time of day to a philistine—it is easy to deduce what Véra was to spend her life doing.” Jenny Offill’s narrator in Dept. of Spectulation states the case more succinctly. “Art monsters,” she explains, “only concern themselves with art, never mundane things. Nabokov didn’t even fold his umbrella. Véra licked his stamps for him.”

Véra is now perhaps most famous for having saved an early draft of Lolita from an incinerator, but it’s in these individually unremarkable anecdotes, these dreary lists, that the force of her everyday necessity is most powerfully felt. As Schiff writes in her introduction, quoting the illustrator Saul Steinberg: “It would be difficult to write about Véra without mentioning Vladimir. But it would impossible to write about Vladimir without mentioning Véra.”

The reality of a marriage, as any married couple will tell you, is, by an outside observer, inscrutable. Those attempting to analyze the Nabokovs’ marriage have an abundance of texts testifying to their happiness; Vladimir’s letters to Véra are addressed to “my sun,” “my lovely,” “my darling,” “my life,” and, more idiosyncratically, to “Sparrowling,” “Skunky,” “Mosquittle,” and “My Poundlets.” But their relationship also presents a central psychological difficulty: try to imagine a woman, intelligent, beautiful, and witty, who would happily spend year after year literally carrying her husband’s books for him.

Invitation to a Bonfire confronts this difficulty by refusing to rule on the ultimately unanswerable questions. Celt smartly denies the reader a pat, intimate scene between husband and wife in which carefully selected details prove, once and for all: she resented him, or she didn’t; he appreciated her, or he didn’t; they were happy, or they weren’t. (The text is presented as a “collection of papers,” comprising primarily a batch of letters from Lev to his wife and a journal kept by Zoya.) What it offers instead is a portrait of Lev’s wife. The portrait does not pretend to be definitive.

To her husband’s colleagues, Vera is aloof, “absolutely magnetic when she wants to be,” but with “no interest in chatting.” To a resentful publicist at her husband’s publishing house, she is infuriatingly exacting. “Nothing is ever good enough for that woman,” the publicist confides. “And my god can she not take a compliment.” To her husband’s mistress Zoya she is an enigma. “I know what little is in the public record,” Zoya writes, “and what she told her husband, up to a point . . . . The rest I have to make up.”

An enigma and a kind of bruise. “Here’s what a bruise can do,” Celt-as-Zoya writes in one of the novel’s most potent passages: “ache and ache. You press your thumb to it and there it goes again. Purple pain, morning pain, private pain to explore in one’s own bedroom. Tear a piece of skin off like you’re breaking the peel of an orange. Snap a rubber band on your wrist until the flesh gets vivid.”

Zoya’s interest in Vera is understandable: she’s married to Zoya’s favorite novelist, the man with whom Zoya is sleeping. “Vera and I,” Zoya writes, “have become so tangled together that in order to tell you my whole story, I have to tell you hers, too.” In the privacy of her journal, Zoya presses her thumb to the places she has been marked by that entanglement.

Their first encounter: back in the Soviet Union, as teenagers, both Zoya and Vera were briefly members of the same Young Pioneers scout troop. Recalling Vera’s behavior during one of the troop’s games, Zoya notes that Vera was only “interested in playing when she thought she was making up the rules as she went. As soon as she realized she was part of something larger, and something entirely outside her design, the game lost all its value for her.” One of their last encounters: “Only Leo Orlov matters, really”—this is Vera speaking to Zoya: “the writer, and his public face. That’s who I’ve built my life around, god knows. That’s who I’ve built.”

In the introduction to Véra, Schiff writes that “In many ways the distant, unapproachable, irreproachable “VN” was [Véra’s] construct.” Schiff credits Véra with “creating” her husband as a public figure (italics hers). Directing her husband’s life, ensuring his literary legacy—this is a game not only within but in fact of Vera’s design.

Véra Nabokov’s hair began to gray, by her own account, when she was 25. “By her mid-forties,” Schiff writes, “the opalescent bob [had] paled to a radiant white.” At Cornell, she cut a fierce figure—“many,” Boyd reports, “reported that they had never seen a more beautiful older woman”—in sharp contrast with the apparent subservience of her role in the classroom, the car, the home. Boyd, in his introduction to Letters to Véra, the collection of Vladmir’s correspondence with his wife he edited, makes clear that this apparent subservience was, intentionally or not, a façade. “She dedicated herself to serve Nabokov,” he writes of Véra, “but on her own terms.”

Véra, after all, was the one who approached Vladmir in 1923, at a charity ball, wooing him with recitations of his published poetry. When they lived Berlin she carried, he notes, a gun, and “drove like a man.” She was, he writes, “steely,” and it was around her “steely support” that Vladimir “built his life.”

“To cultivate such dependence is itself a form of power, though one whose full force can be wielded only through denial.”

Around her steely support—her ability to negotiate favorable publishing contracts; the fear she seemed to instantly instill in anyone foolish enough to criticize her husband in her presence—but atop her more quotidian buttresses as well. Taking dictation from Vladimir and driving him from coast to coast while he wrote in the backseat; keeping house for him and doing research for him and writing drafts of his lectures; in these ways she ensured that he, in Schiff’s words, “existed not in time, only in art.”

To cultivate such dependence is itself a form of power, though one whose full force can be wielded only through denial. “When she met him,” Schiff writes, “she felt that he was the greatest writer of his generation; to that single truth she held strong for sixty-eight years.” If he was, it was her belief and her work—she was always his first reader, his first editor, though she “shrugged off any active involvement, even when handwriting is on the page”—that made it possible.

Miranda Popkey has written for The New Republic, The New Yorker's Page-Turner Blog, and The Paris Review Daily, among others. She lives in St. Louis, MO.
http://mirandapopkey.com/words 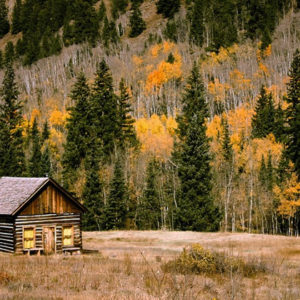 In 2016, I was living in Denver, Colorado and had just heard word that my first novel would be published. I’d been developing...
© LitHub
Back to top