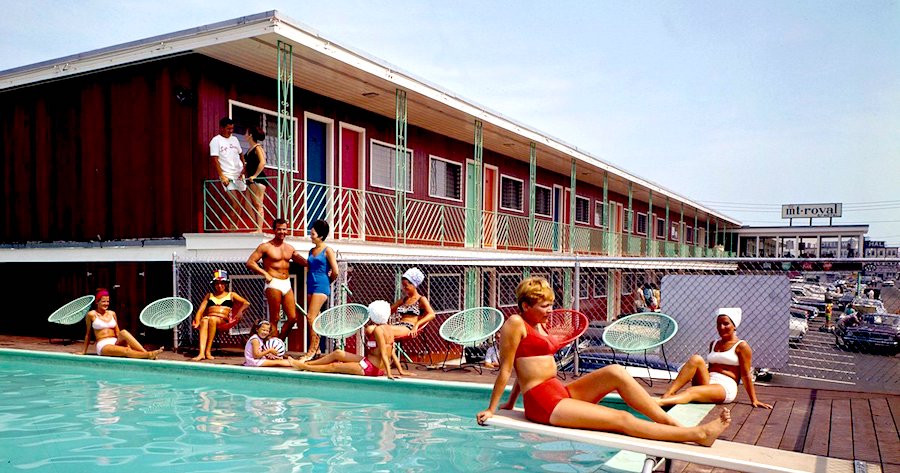 The End-of-Summer Joy of Reading by a Motel Pool

Susan Harlan on One of Life's Simple Pleasures

I like to take long drives in the summer—sometimes to New York City, where I used to live, but mostly around the South, where I have lived for a decade—and I often stay in motels. And my favorite thing about motels is their pools. Last month, I was in the Shenandoah Valley in Virginia, at a motel on a two-lane country road. I arrived in the evening, with my dog Millie, after a day of driving Skyline Drive.

It was a perfect day. At one point, we stood in a field of milkweed, surrounded by butterflies and bees, looking out over all the green. “It’s like carpet for mountains,” I said to Millie. I bought a National Park Passport at the Visitor Center and stamped it with my first stamp. The blank pages seemed filled with potential. We were heading home, to North Carolina, the next day.

Our motel for the night was surrounded by fields and cornfields. We checked in and parked in front of our room. I unloaded my bags, changed into my bathing suit, and headed to the outdoor pool. And I took a book with me: an Everyman’s Library collection of James Merrill’s poetry. I bought it in Paris this January, at the Abbey Bookshop. The Abbey Bookshop is snug and crowded—there are lots of piles everywhere—which I like. You can search through the stacks and see what you find. I keep many of my books at home in stacks, so I find the bookstore’s stacks comforting. That day, I was trying not to buy anything as my suitcase was already pretty full, but this book was perfect because it was so small: just the size of my palm. I put it in my purse and carried it around the city for the week and read it in cafés and on park benches. And then when I got home, I left it in my purse, so I would always have some Merrill if I needed him.

It seemed funny that my book was in rural Virginia now, far from Paris.

Cars and semi-trucks passed on the road. They had their headlights on, but it was still light out. The pool was surrounded by an iron fence, and the chairs and chaise lounges were brown and cream: the old-fashioned kind with rows of plastic straps. I tucked my towel between two straps and stretched it out and sat and read. Cows mooed in the distance.

These pools aren’t only about swimming. They’re about spending time with strangers in a place everyone is passing through.

After a while, I decided to take a dip. There were two other women in the pool, and we swam back and forth, from side to side, because there was a rope across the middle. You can’t swim very far in a motel pool without turning around, even if you are swimming lengthwise. It only took three breast strokes for me to cross, and then I pushed off the wall again, back and forth, as the sky changed.

“Nice sunset,” one of the women said.

“It’s starting to get nice and orange,” I said.

A woman wrapped in a blue towel walked around the pool. Another woman sat at a table in the corner, with a small white dog her feet. The air smelled of manure, a smell I really like, maybe because it reminds me of a summer camp I went to as a kid. Several teenage boys appeared with snorkeling masks on, and they dipped their faces in the water tentatively, as if trying out the masks. They laughed.

I got out of the pool and went back to my chair. Two people sat at a nearby table.

“We should think about getting dinner,” the woman said. “Places are going to close soon.”

The man nodded, and they left. I picked up my book again, flipping to pages I had dog-eared and listening to the teenage boys yell at each other.

Because motel pools tend to be centrally located and outdoors, they give you a view of everything. Indoor hotel pools cut you off from the world, but at a motel pool, you’re right there, with people who have come together simply because they stopped at the same place for the night

These pools aren’t only about swimming. They’re about spending time with strangers in a place everyone is passing through. This is particularly true if you travel alone, as I usually do. There is a calm to being around strangers. When I lived in New York, I loved to go to bars and cafes by myself. Sometimes I would read, and sometimes I would just sit. Motel pools remind me of this feeling, the feeling of being alone in company, even if the places don’t seem to have anything in common.

My favorite motel is in a small town in Tennessee, near Great Smoky Mountains National Park. I have been staying there for years, and I always go at the end of the summer, to say goodbye to the season. The motel has a log cabin-y vibe, with rocking chairs in front of the rooms and a large carved bear next to the office. It smells like campfire.

When you drive up, the pool is to your left. There always seems to be a beach ball floating in it, rolling around in the breeze. Sometimes I just walk around in the shallow end, running my palms on the water. A river runs behind the motel, and I like the idea of these two bodies of water so close to one another, one real and one not. At night, the lights from the rooms shine on the pool, yellow squares mapped out on the surface.

The last time I was there, I sat by the pool and read my Merrill for an afternoon and listened to the cars, RVs, and motorcycles pass on the two-lane country highway. I don’t usually like the sound of traffic, but I do at motels. It reminds you that the world is in motion, even if you have stopped. Motels are so bound to roads, and after a while, the sound of traffic seems to be its own language, a language of movement, and you can just sit with your book and listen to this language with the strangers who, for a time, share a place with you.

Why Are Writers Particularly
Drawn to Tarot? 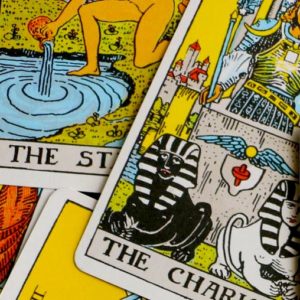 Why Are Writers Particularly
Drawn to Tarot?

For several years, tarot has drawn attention at the Association of Writers and Writing Program’s annual conference: the poet...
© LitHub
Back to top