Dani Shapiro at Beyond the Page: The Best of the
Sun Valley Writers' Conference

In the spring of 2016, author Dani Shapiro received the stunning news through a genealogy website that her father was not her biological father. Her memoir, Inheritance, captures her urgent quest to unlock the story of her own identity, a story that had been scrupulously hidden from her for more than 50 years. It caused her to rethink everything she knew about herself, her roots, her family, the ground underneath her. In this episode of Beyond the Page, she talks with physician and author Abraham Verghese about living in a time in which science and technology are uncovering long-held secrets and about the capacities of the human heart to contend with the consequences of what we discover.

Every day I was confronted with the fact that I didn’t look like the rest of my family. It was really actually quite a formative part of my identity, because to be told every day that you’re not who you think you are or that in some way you don’t belong. I mean, my way of adapting whenever anyone would say that to me was that I’d push back on it and talk about just how observant a family I came from and that I went to a Shiva and I grew up speaking Hebrew and we kept kosher. There was this family history, and I would push back with that because I found it both offensive and disturbing. You know, we know now that it’s so politically incorrect to say to someone, you don’t look like who you think you are or where you come from. You know where you’re from. But I really was faced with that every day, and I think it contributed to a sense of being other.

To listen to more of Dani Shapiro and other talks from the Sun Valley Writers’ Conference, subscribe now on iTunes, Spotify, Stitcher, or wherever else you find your podcasts!

Dani Shapiro is the author of the instant New York Times best selling memoir, Inheritance, which was published in January 2019 by Knopf. Her other books include the memoirs Hourglass, Still Writing, Devotion, and Slow Motion, and five novels including Black & White and Family History. Along with teaching writing workshops around the world, Dani has taught at Columbia and New York University, and is the cofounder of the Sirenland Writers Conference in Positano, Italy. In February of 2019, Dani launched an original podcast, Family Secrets, in collaboration with iHeartMedia. An iTunes Top 10 podcast, the series features stories from guests who—like Dani— have uncovered life-altering and long-hidden secrets from their families’ past. She lives with her family in Litchfield County, Connecticut.

See the World Through Books: A Reading List from Bookselling Without Borders 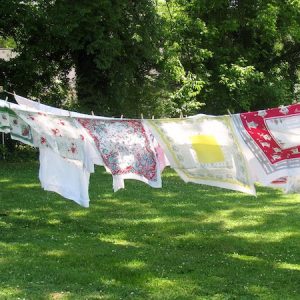 I washed a load of clothes and hung them out to dry. Then I went up to town and busied myself all day. The sleeve of your...
© LitHub
Back to top