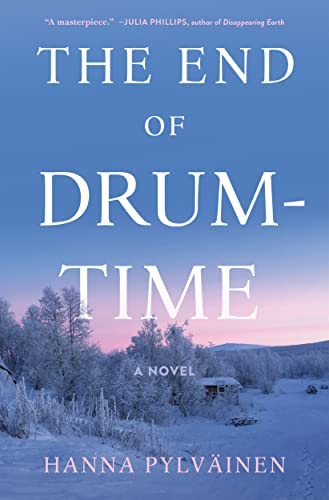 The following is from Hanna Pylväinen's The End of Drum-Time. Pylväinen is the author of the novel We Sinners, which received a Whiting Award and a Balcones Fiction Prize. Her work has appeared in Harper’s Magazine, the New York Times, the New York Times Magazine, Chicago Tribune, and the Wall Street Journal. She is on the faculty at the Warren Wilson College MFA Program for Writers and lives in Philadelphia.

The day of the earthquake was the darkest day of the year. This far north what counted as day was just twilight stretched thin, so that no shadows fell, and the steeple of the church made no impression on the snow, and the river and forest and hills were all suspended in the same half-finished light. The effect of this was a shared, if unexpressed, uneasiness, but most people were used to it—if given the choice they would have said, let there be darkness, and gone back to their work. That was the sentiment anyway around people who had grown up here, Lars Levi among them—he found the cold and the dark invigorating, he was a man of extremes and so he was drawn to extremes, they suited him, they spurred him on.

But even he had to admit the morning was off-kilter somehow. He had dreamed the night before of something of importance, what, he couldn’t say, and it troubled him, that he might have missed its message. He was a man who put credence in these things, in the importance of what was felt, in part because his mother had been that way and in part because the land made everyone here that way—no one could live beneath the northern lights and the midnight sun and not come out of it sure there was something besides rationality at work, least of all Lars Levi, the pastor of this most northern parish for the past twenty-two years, a man of some hubris but not a man who could be accused of insincerity. He was here to preach, he believed in what he spoke, but today he was especially sure of his purpose, and the weight of that purpose made him anxious. He paced up and down the side aisle, inventing little tasks to check on—had Henrik rung the bell? Had Willa made the fire in the stove?

The church was filling up, it really was, the Finns in their usual places toward the front, while behind them were the Laplanders, the Lapps, the Sámi, whatever you called them—he used Lapp when he spoke to the Swedes, and Sámi when he spoke to the Sámi—and it occurred to Lars Levi that he was doing it, he had eight hundred and twenty-nine parishioners stretched over a hundred miles and a good quarter of them were here. The Finns had skied for hours along the frozen river, and the Lapps had harnessed their reindeer to the sledges and they had driven twenty, forty miles through the snow to get here, to a tiny church-village in Sweden where ten of the forty inhabitants were his own family, to hear him speak, him, Lars Levi Laestadius—but had Henrik rung the bell?

Henrik had rung the bell, and then he had promptly gone back to his store, which was also his home, which people called the dark house because you could get alcohol there, technically illegally, but in the first place the law was impossible to enforce because too many people broke it, and in the second place Henrik was not one to stand on principle, he was one to stand on getting himself out of debt, and moreover, he was of the opinion that the darkness was going to drive them all mad so they might as well go down drinking. He wasn’t from here, and he hadn’t grown up to be cold and call it happiness—my God, if he’d had the money he would have left the day he’d arrived! He would have left and he would not have come back. But since he couldn’t leave this very end of the earth he would, at the very least, leave all the talk about sinning to those who cared to sorrow endlessly over their sin. He, for one, was worn out by such talk, and all the lecturing about drinking, sometimes from the very same people who came to him later to buy something to drink. But more practically, there was a very good chance someone would sneak down during the service, wanting to buy a bottle of something or other, and he couldn’t lose the sale. And, anyway, how could Lars Levi even notice if he wasn’t there?

Now that so many came?

No one did notice that Henrik hadn’t returned. The church was so full it was starting to get warm in there for once, and everyone had taken off their hats, and when they shook the snow off their coats bits of loose fur drifted to the floor, as if it were snowing indoors as well as out. The same sense of flurry came from sound, from one conversation atop another, alternately polite or hearty tones, hello, hello, it’s nice to see you again, hello, what a coat, hello, hello, before anyone moved into any real business. Probably people should have waited until after the sermon to talk about it but no one could help it, it got inserted in anyway, did you hear, people said, in tones that conveyed worry but really suggested horror, about the Heikkillä boy who’d been born with two thumbs on his right hand?

That was the news among the Finns, anyway. The Sámi didn’t tend to know much about the Finns, and had their own interests to exchange— they wanted to know how everyone else’s herds had done over the summer, though no one wanted to reveal how their own had done, and no one was really going to ask or answer this directly, but still, it could be inferred, by whether someone had a new coat on, or how they talked about the migration, how long it had taken them to come up from the sea, and even if someone wouldn’t say anything straight out about their own herd they might talk about someone else’s—how many white calves the Tommas hadn’t slaughtered, for instance, just leaving them in the herd to show off. The Tommas were easy to talk about, because everyone resented them slightly—they were reindeer-rich. They didn’t brag, per se, but they didn’t need to—every year it seemed the Tommas were hiring someone else to help with the herd, and that did its own talking. Plus it was even easier to talk about them today since they weren’t actually there—and, there was the very interesting news that Risten Tomma was engaged to the Piltto boy. Not really what anyone would have expected, but if you were already that wealthy, then maybe it didn’t really matter who you married. No one said that, of course, but they all understood they were saying it. He’ll need good luck with Nilsa Tomma for a father-in-law, people said, as if they pitied the Piltto boy instead of envied him.

What no one said was what they were all really doing there. Lars Levi was right, that the effort it took to get to church was so great most went only when required, on the four high holy days, to pay taxes and be confirmed and pick up supplies from Henrik’s store, but none of them dared admit to each other that they’d all come this time for the same reason: over the summer it had been said that Lars Levi’s sermons had become particularly wild, and that people who went to hear him were stricken with some sickness and threw themselves around, and so they were all there, mostly, out of the curiosity to see someone else go crazy. Though if they thought about it Lars Levi had already been getting a bit strange the year before . . . or had it started a few summers earlier, when his son had died?

In the aisles the dogs snapped at each other and the children wandered about, staring at strangers. In the front Lars Levi, newly nicknamed Mad Lasse, eyed them all, estimating when it would make sense to begin, since more people were certain to arrive late. It was how everything was here, there were no clean lines, there was no even break to any bit of wood, and the only way to manage was to accept that if services were generally begun in the morning around first light, ten in the morning or so, that really they might begin around ten-thirty or even eleven, and he had to cling to the success of holding the service at all.

Not that Lars Levi blamed any of them for this. He had some interest in his Finnish parishioners, who made up a quarter of his congregation, and he felt a responsibility toward them, especially their poverty, but it was the heart of the Sámi he was always after. He couldn’t have said why that was—was it, simply, how poorly they’d been treated for so long by other pastors? Was it his own Sámi blood and sympathies, his feeling that they were unfairly maligned? Was it—did he—simply like them better as people, admire and even envy their vitality, how hard they worked, never a day off ? Or maybe it was defensiveness, plain and simple, from his own days in the south at seminary school, where he was mocked for being so poor, for dressing so shabbily? It had got so that he was happy enough for anyone to call him a Lapp, though, usually, no one did. But wasn’t he just like them? Wasn’t he too full of feeling, didn’t he also understand what it was to know without knowing, to have his feeling know first? Of course just then he saw one of them, drunk in the back pew, asleep on his back, and he was annoyed, he took it too personally, though he supposed he should just be glad the man had come at all. No, he wouldn’t let it bother him, he decided, he would preach with such strength, such vigor, even the drunks would sit up and hang their heads with shame.

Excerpted from The End of Drum-Time: A Novel by Hanna Pylväinen. Published by Henry Holt and Company. All rights reserved.

You can now watch Cat Person—among other literary adaptations at Sundance—online. 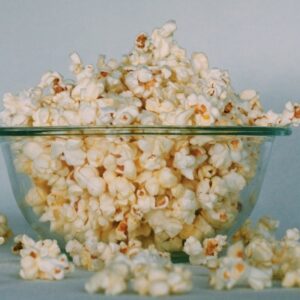 You can now watch Cat Person—among other literary adaptations at Sundance—online. If you've ever dreamed of being cool enough to go to Sundance (same), I've got good news for you: you can buy tickets...
© LitHub
Back to top