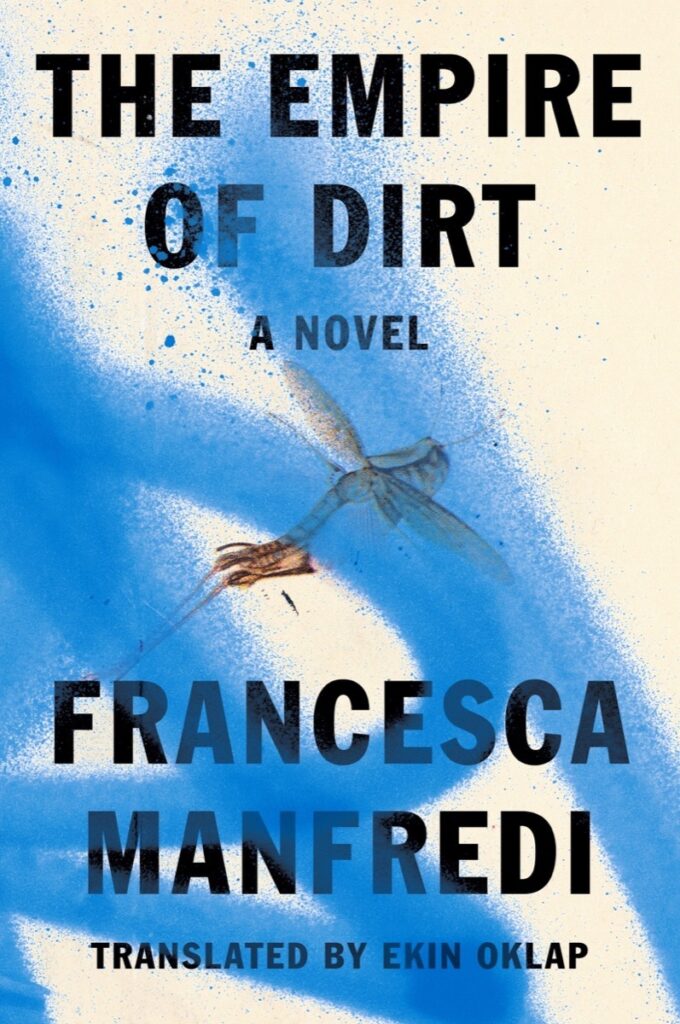 The following is from Francesca Manfredi's novel, The Empire of Dirt. Francesca Manfredi is a graduate of the creative writing school Scuola Holden, founded by Alessandro Baricco. Her debut short story collection, Un Buon Posto Dove Stare (A Place to Stay In), won Italy’s Premio Campiello Opera Prima. She lives in Turin, Italy.

People in town used to call it “the blind house” because only three of the walls had windows, and even those were tiny, and the wall that greeted those who came up from the road had none at all. From that angle the house looked like a block of white concrete, a shoebox. I would hear the older boys sometimes, during recess at school: “That’s the girl who lives in the blind house.”

After what happened in 1996, they started calling it “the black house” or “the cursed house” or even “the house with a thousand legs,” after the dark bugs that could still be seen crawling over the white walls, according to those who dared get close enough to look. Few people used these names in front of me, and few people ever approached the house: just the postman, who came twice a week, and in the evenings, local kids egged on by their friends. They would come close enough to ring the bell, then run away as fast as they could, back onto the road that led to town. Eventually people lost interest in the house, and the events that had occurred there took on the contours of legend, a story that was told over and over, changing every time depending on who told it, until finally it became a distant episode, remote in time and space: something cold, dead, that need no longer be feared or summoned, and was overshadowed by the more sensational news stories appearing on television.

The blind house: that’s what my mother called it too, shaking her head and with her voice full of scorn every time something broke—​a tap starting to drip only weeks after the plumber’s last visit; a wooden shutter consumed by damp breaking in half when it was pulled shut a little too firmly. The blind house, she would repeat in a hard tone, as if it were a thing she could not break free of. My grandmother would pretend she couldn’t hear her, or she would merely smile, but I knew that it affected her more than she was willing to show. The house had been built by her grandparents and by her parents before they’d even had her. She was born there, in one of the rooms on the second floor—​she had never told us which one—​and in there she had given birth to my mother, and to my aunts before her. The house was surrounded by fields, vegetable gardens, stables, and enclosures for the livestock. We had chickens, rabbits, ducks, goats, sheep, and cows, though their numbers had gradually diminished ever since my grandfather had died. When I was born, there were two horses and a donkey. When Grandma was little, there had been three horses and four donkeys. She said they had served to carry produce to town on market day, before there were vans or cars. We didn’t have much use for the donkey anymore but we kept it because my mother liked it, and my grandmother had grown fond of it, too. Sometimes horses would mate with donkeys, producing a mule or a hinny. These animals are sterile but sturdy: we still had a mule now, the sole survivor from that earlier time of horses and donkeys. It had a disproportionately large head and sad eyes. When it raised its ears, it looked like a rabbit. When I was little I would ask to be lifted up onto its back, and I would pretend that I was riding a giant bunny.

The third and last floor of the house used to be a granary back in the day, or so my mother had told me. Before it became my room, it had been used as an attic. I have some memories, however foggy, of that old attic: an army of boxes, rusty bicycles and old toys, and an oblique, silty light filtering through windows darkened by years of dust and filth. The attic was where I went to hide every time I fought with my mother. I would emerge only when it was time for dinner, and go downstairs with my clothes covered in dust and my hands black. My grandmother would be waiting on the stairs to intercept me and take me to the bathroom, where she would pull my dress off over my head and scrub me with soap until—​so she would say—​I looked presentable for Mother. I must have been seven or eight when my mother decided to clear out the attic and turn it into my bedroom. I had long since stopped sleeping in my parents’ room, and instead slept in my grandmother’s room, across from theirs. My mother warned me that I would be moved to the attic only the day the work began. She woke me up on her way out of the house. My grandmother must have been downstairs or in the garden; she tended to wake up at dawn, especially in the summer, to make a start on the household chores before it got too hot. My mother slipped into the room and sat on the edge of the bed; she stroked my hair until I opened my eyes, then smiled at me.

“I was thinking you shouldn’t sleep in here anymore,” she said.

“Because you’re a big girl now, and big girls should have their own rooms.”

I thought of how the house didn’t have any other rooms besides those we were already using. “Will I have to go to another house?” I said.

She smiled in that way she had, lifting only one corner of her mouth, and shook her head. “Which room do you like best?”

Then she kissed my forehead and left without waiting for an answer. The workmen arrived soon after that to clear out the dust-​coated furniture and the boxes from the attic. They put them in a pile out in the courtyard while my grandmother and I looked on wordlessly. In the days that followed, my father laid newspaper over the floor and painted the room blue. He set up a desk, a wardrobe, a little bookcase, and a new bed, because the one I had been using in Grandma’s room, and which had once belonged to my granddad, could not be carried up the stairs.

On my first night up there, my mother came in to wish me good night. The paper lampshade let through a thin light, which reflected off the sloping roof right in front of the bed, lengthening the shadows and making the furniture look longer, the ceiling taller.

“Why do I have to be up here?” I asked my mother as she tucked me in.

“I’ve left a surprise for you,” she said. “You’ll see when I turn the lights off. Good night, Valentina.”

She stood up and clicked the switch off before walking out and leaving the door ajar. I saw then that the ceiling was decked with stars. Tiny, sticky stars that glowed yellow in the dark. I felt a hollowness in my chest and I began to cry, quietly, the tears rolling down my neck and wetting the pillow.

The interior of the house was made of wood, and at night, especially in the summer, the whole building creaked, as if there were some invisible creature stepping on the floors, or as if the house itself were complaining. When I was little, if I woke up in the middle of the night or had trouble falling asleep, I would tiptoe downstairs barefoot to call for my father, but no matter what he did to soothe me, no matter how many times he tried to explain that it was just the wood settling, adapting to the changes in temperature, alternately expanding and contracting, I never stopped reading in those noises some form of imminent danger. Even now, in my new house, I can almost hear the floors creaking, the ceiling closing in and drawing back again, in and out, as if it were breathing.

That night, when I saw the blood, I went back to my room. It was summer, and summer was always the noisiest time, because of the heat and the variation in temperature between day and night. I climbed back into bed with a wad of toilet paper in my underwear, because I knew this was only the beginning—​though I had no idea yet of what was about to come. I had left the window open because of the heat, and I could see the light from the porch lamp; Grandma always left it on, for the dogs, who stayed out at night when the weather was warm enough, but also because she thought burglars would be more reluctant to approach a house if the lights were on. The house creaked under the weight of invisible footsteps. I stared at the ceiling and imagined that those footsteps belonged to my father, who was coming up from his room to sit on my bed, to lie down beside me and tell me there was nothing to be afraid of. I could feel the blood soaking the paper between my legs.

I woke up when daylight broke through the window. It must have been very early, because Grandma was still in bed. The sound of birdsong came from some faraway place, outside. The house was quiet. The crack in the wall across from my bed, running along an edge and halfway to the floor, had started to bleed.

The Wartime Technology That Changed the Battle of Britain 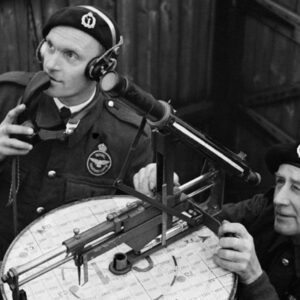 The Wartime Technology That Changed the Battle of Britain We Have Ways of Making You Talk is a weekly show exploring the war in close up, hosted by comedian Al Murray and historian...
© LitHub
Back to top