On today’s episode, cultural ecologist and philosopher David Abram discusses the animism, power, and potency of the living world. In our current moment of ecological and societal instability he calls on us to remember our inherent participation in the collective, embodied flesh of the Earth.

David Abram: Yeah. Well, I think as a cultural ecologist, what I’m primarily known for is research, investigations, into the ecology of perception or the ecology of sensory experience; that is, the way the activity of our eyes, of our ears, of our tongue, our nostrils, functions to bind our separate nervous systems into the encompassing ecosystem, as though our animal senses actually work almost like a kind of glue binding our individual neural system into the wider ecology, the wider ecosystem. But I’m also convinced that there are ways of speaking that many of us have inherited from this curious culture into which we were born, ways of speaking that work to stifle or frustrate the instinctive rapport between our animal senses and the animate earth around us. I’m just as convinced that there are other ways of wielding our words that can encourage and enhance that spontaneous reciprocity between our bodily senses and the earthly sensuous.

Emergence: And before you were a cultural ecologist and writing about sensory perception and the world between the animate and the inanimate, you were working as a sleight-of-hand magician. I’m really curious to hear the origins of that.

David Abram: I suppose I just always had a propensity and a fascination for the mysterious, for a kind of dark wonder. I’d always been fascinated with the night and with stargazing. And many things that my friends seemed to take for granted as being deeply ordinary, I found astonishingly weird—like the night sky or even the day sky and the intense blue, that azure color that ripples through my body when I gaze up on a clear day, wondering, why would that color be so intense to us if we’ve evolved underneath it for so many million years? You would’ve thought it’d become a kind of washed out, neutral color to us, a kind of gray. But it’s not neutral at all. It’s so intense and vivid and brings so many cascades of sensation and feeling and emotion: all of these puzzlements in regard to the ordinary, plain world that surrounds us.

When a magic shop opened in the next town—when I was about fifteen, on Long Island, where I was growing up—I stepped into that shop and was kind of dazzled by all of these colored boxes and gizmos, and I associated this sense of magic and the creation of magic with the possibility of invoking this kind of wonder, not just for myself but for my friends, for others around me. And I took up the practice of magic, and I became quite adept at the craft of sleight of hand and put myself through college working as a slight-of-hand magician in clubs and restaurants throughout New England.

After two years of college I took a year off and traveled, just as a street magician, through Europe and the Middle East; then returned to college, finished my undergraduate degree, and took off traveling as an itinerant magician through Sri Lanka, through Indonesia, through Nepal, looking to meet the traditional Indigenous magicians or magic practitioners who apply their craft in various village regions. My focus at first was in the uses of magic in medicine, in folk medicine and curing. And I was tracking on this sense that magic, that sleight of hand itself, could be used as a kind of shock therapy, working through the senses to unexpectedly knock a person’s organism out of its endlessly reiterated habitual flow or pattern of energetic experience.

But as I was traveling there—first in Sri Lanka, then in Indonesia—I was looking to meet some of these individuals there—in Indonesia, they’re called dukuns; in Nepal they were called jhankris—these medicine people, or magicians, who were the doctors, one could say, for the villages in their vicinity and sometimes for those at vast distances from them. If they were well-known practitioners, people would travel for days on foot, sometimes carrying an ailing family member.

As I got close to some of these practitioners and was invited into their homes, and even asked to trade secrets with them, I became more and more fascinated by their relation to the wider earth in their locality; that is, it became apparent that these magicians first and foremost functioned as intermediaries between the human community and the more-than-human community of beings, within which the human village was embedded. And by more-than-human community, I don’t mean anything supernatural. I just mean the other animals who walk and crawl or migrate through this terrain, but also the flapping, flying, and screeching folks who squawk down at us as they soar overhead. They were all assumed to be just as alive, just as awake, as we two-leggeds were. Even whole forests were assumed to be sentient and have their own intelligence.

This kind of experience, this sensibility—anthropologists at the end of the 1800s and the early 1900s gave the term “animism” to this mode of experience, which assumes that everything is alive, that everything is awake. Well, it turned out that the magicians, as I was coming to know them better, were the intermediaries, balancing the relations between the human community and this wider community of powers; taking care that the human gang was never taking more from the land than it returned to the land, whether through prayers, propitiations and offerings, or all sorts of other practices that I witnessed these dukuns and jhankris engaging in from morning till night. And it became clear that their ability to heal or cure was a kind of by-product of this more central craft of balancing the relation with the living land.

David Abram, PhD, is a cultural ecologist and philosopher. He is the founder and creative director of the Alliance for Wild Ethics. His books include Becoming Animal: An Earthly Cosmology and The Spell of the Sensuous: Perception and Language in a More-than-Human World.

Behind the Mic: On Salmon by Mark Kurlansky, Read by the Author 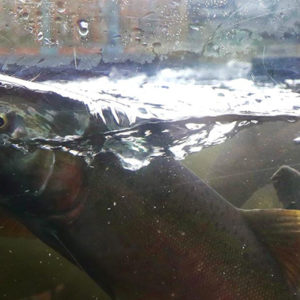 Behind the Mic: On Salmon by Mark Kurlansky, Read by the Author