The Drone Eats With Me 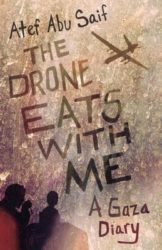 The following is from Atef Abu Saif’s novel, The Drone Eats With Me. Saif was born in Jabalia Refugee Camp in the Gaza Strip in 1973. He is the author of five novels, including A Suspended Life, which was shortlisted for the 2015 International Prize for Arab Fiction. He lives with his family in Gaza.

The children have barely slept in days. Nor has anyone. Sometimes a couple of hours just isn’t enough, especially when the little sleep you get is stretched thin with anxiety. Worry plays like a lightning storm behind your eyelids whenever you close them. Only when that stops do your hands start to relax. Then, finally, sleep starts to gather around you, slowly, like a gentle whirlwind, circling you and your loved ones.

The pleasure of watching my kids sleep peacefully is no longer possible. Instead, what plays before my eyes are haunting images of the preceding day: a house in the neighborhood struck by a drone; photographs of mayhem posted online by various media; vivid descriptions of destruction from a friend who happened to be an eyewitness. Watching my kids sleep used to be one my greatest pleasures. I don’t know how many hours I’ve wasted watching my nineteen-month-old daughter, Jaffa, sleeping, drifting among the clouds of her dreams. I’d smile at every slightest movement: the occasional twitch of a limb, the faint smile dancing on her lips. This was my favorite moment of the day. But now, looking at my children and thinking they could be dead in a moment’s time, that they could be transformed into one of those images on the TV—it’s too much.

Instead, over the last few nights, I’ve wanted to wake my children up. I can’t bear them being so quiet. When they’re awake, playing, shouting, creating imaginary worlds of their own, they help me deal with my own helplessness. Their noise, the fuss they make, their shouting and running around the flat—all of it makes life a little easier for me. They upstage the sounds of the terrible world outside.

Tonight they will fall asleep quickly, I’m sure of it. The lack of sleep from the night before weighs heavily on them. There’s no electricity. The only light to disturb them is the faint glow of my torch as I move around the flat. You can hardly see the face of the person across from you, it’s so dark. I close the door to the corridor as quietly as I can. Tonight, I think, they’ll drop off quickly.

Back in the living room, I open a window. It’s good to feel fresh air on your face. Important to have a break from staring at the ceiling all the time, or from looking directly into the eyes of your loved ones, seeing the fear in them.

My wife, Hanna, and I sit on the blue sofa and stare into the darkness. No light, no details of the world can be seen outside the window. Only blackness and the dark outline of the buildings across the street.

It slowly dawns on us, sitting there, that the rest of the building is completely empty. Hanna is the first to notice it; the people in the flat across the corridor left that morning. Om Noor phoned Hanna that evening, saying she had moved to her father’s house in the Rimal quarter. But now Hanna realizes she hasn’t heard a sound from the flat above either. Nor has she heard the heels of the lady who lives down the corridor. We start to retrace the events and sounds and movements of the day to reinterpret them. It leads to one conclusion: we are the sole occupants of the building, and the building—our home for the last three-and-a-half years—is not safe.

People look to anything that makes them feel safer, anything that props up their world a bit longer before the inevitable collapse. Our fates are all in the hands of a drone operator in a military base somewhere just over the Israeli border. The operator looks at Gaza the way an unruly boy looks at the screen of a video game. He presses a button and might destroy an entire street. He might decide to terminate the life of someone walking along the pavement, or he might uproot a tree in an orchard that hasn’t yet borne fruit. The operator practices his aim at his own discretion, energized by the trust and power that has been put in his hands by his superiors.

This is how Gaza looks on the computer screen—a thousand images captured by a speeding drone and relayed back to a computer, perhaps a laptop on a desk. The images might include any detail. One of them could be of Hanna and me sitting on the blue sofa in our flat, staring into the darkness. Another might be of our children sleeping in the corridor, spied through the bathroom window at just the right angle. It must be quite entertaining for those soldiers, sitting at their computer screens; it must feel like the best video game ever. I imagine they draw lots to see who has first go.

We prepare the suhoor. We set the food out in the middle of the living room, in complete darkness. Only night surrounded by more night. I turn the torch on; its weak light fails to hold back very much of the darkness, but it resists nonetheless.

Our hands shiver, our eyes stare at the plates on the floor. The dawn prayers leak into the room from a mosque somewhere out in the darkness. Suddenly we remember our hunger, all at once, diving into the delicious, merciful food.

Excerpted from THE DRONE EATS WITH ME: A GAZA DIARY by Atef Abu Saif. Reprinted with permission from Beacon Press.

We Need to Keep Writing (and Talking) About These Endless Wars 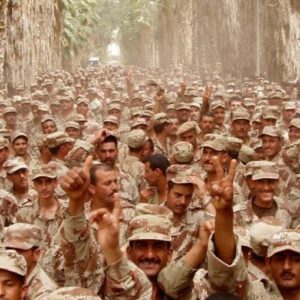 We Need to Keep Writing (and Talking) About These Endless Wars Given the subject of my book—war and its human costs—there has been a significant veteran presence at every event I’ve...
© LitHub
Back to top