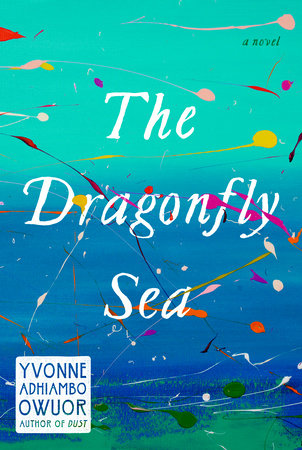 The following is from Yvonne Adhiambo Owuor's novel The Dragonfly Sea. As Ayaana grows up on the island of Pate, forces of nature and history reshape her life and the island itself, and Ayaana ends up embarking on a dramatic ship’s journey to the Far East. Yvonne Adhiambo Owuor is the author of Dust, which was shortlisted for the Folio Prize. Winner of the Caine Prize for African Writing, she has also received an Iowa Writers’ Fellowship, and she has been a TEDx Nairobi speaker and a Lannan Foundation resident. She lives in Nairobi.

To cross the vast ocean to their south, water-chasing dragonflies with forebears in Northern India had hitched a ride on a sedate “in-between seasons” morning wind, one of the monsoon’s introits, the matlai. One day in 1992, four generations later, under dark-purplish-blue clouds, these fleeting beings settled on the mangrove-fringed southwest coast of a little girl’s island. The matlai conspired with a shimmering full moon to charge the island, its fishermen, prophets, traders, seamen, seawomen, healers, shipbuilders, dreamers, tailors, madmen, teachers, mothers, and fathers with a fretfulness that mirrored the slow-churning turquoise sea.

Dusk stalked the Lamu Archipelago’s largest and sullenest island, trudging from Siyu on the north coast, upending Kizingitini’s fishing fleets before swooping southwest to brood over a Pate Town that was already moldering in the malaise of unrequited yearnings. Bruised by endless deeds of guile, siege, war, and seduction, like the island that contained it, Pate Town marked melancholic time. A leaden sky poured dull-red light over a crowd of petulant ghosts, dormant feuds, forfeited glories, invisible roads, and congealing millennia-old conspiracies. Weaker light leached into ancient crevices, tombs, and ruins, and signaled to a people who were willing to cohabit with tragedy, trusting that time transformed even cataclysms into echoes.

Deep inside Pate, a cock crowed, and from the depths of space a summons, the Adhan, crescendoed. Sea winds tugged at a little girl’s lemon-green headscarf, revealing dense, black curly hair that blew into her eyes. From within her mangrove hideout, the scrawny seven-year-old, wearing an oversized floral dress that she was supposed to grow into, watched dense storm clouds hobble inland. She decided that these were a monster’s footsteps, a monster whose strides left streaks of pink light on the sky. Seawater lapped at her knees, and her bare feet sank into the black sand as she clutched another scrawny being, a purring dirty-white kitten. She was betting that the storm—her monster—would reach land before a passenger-laden dau now muddling its way toward the cracked wharf to the right of her. She held her breath. “Home-comers,” she called all passengers. Wajio. The child could rely on such home-comers to be jolted like marionettes whenever there was a hint of rain. She giggled in anticipation as the midsized dau, with Bi Kidude painted in flaking yellow, eased into the creek.

The thunder’s spirited rumbling caused every home-comer to raise his or her eyes skyward and squawk like a hornbill. The watching girl sniggered as she stroked her kitten, pinching its fur in her thrill. It mewled. “Shhh,” she whispered back as she peered through mangrove leaves, the better to study the passengers’ drizzle-blurred faces—a child looking for and gathering words, images, sounds, moods, colors, conversations, and shapes, which she could store in one of the shelves of her soul, to retrieve later and reflect upon.

Every day, in secret, she went to and stood by the portals of this sea, her sea. She was waiting for Someone.

The girl now moved the kitten from her right to her left shoulder. Its extra-large blue eyes followed the dance of eight golden dragonflies hovering close by. Thunder. The dau drew parallel to the girl, and she fixated on a man in a cream-colored suit who was slumped over the vessel’s edge. She was about to cackle at his discomfort when a high and harried voice intruded:

Her surveillance of the man was interrupted as lightning split the sky.

It was her mother. “Ayaaaana!”

At first, the little girl froze. Then she crouched low, almost kneeling in the water, and stroked her kitten. She whispered to it, “Haidhuru”—Don’t mind. “She can’t see us.”

Ayaana was supposed to be recovering from a morning asthma attack. Bi Munira, her mother, had rubbed clove oil over her tightened chest and stuffed the all-ailment-treating black kalonji seeds into her mouth. They had sat together, naked under a blanket, while a pot of steaming herbs, which included eucalyptus and mint, decongested their lungs. Ayaana had gulped down air and blocked her breath to swallow six full tablespoons of cod-liver oil. She had gurgled a bitter concoction and been lulled to sleep by her mother’s dulcet “do-do-do.” She had woken up to the sounds of her mother at work: the tinkle of glass, brass, and ceramic; the aroma of rose, clove, langilangi, and moon flower; and the lilts of women’s voices inside her mother’s rudimentary home-based beauty salon.

Ayaana had tried. She had half napped until a high-pitched sea wind pierced and scattered her reverie. She had heard far-off thunder, but she had pinned herself to the bed until the persistent beckoning of the storm proved irresistible. Then she rolled out of bed, arranged extra pillows to simulate a body, and covered these with sheets. She squeezed out of a high window and shimmied down drainpipes clamped to the crumbling coral wall. On the ground, she found the kitten she had rescued from a muddy drain several days ago, stretched out on their doorstep. She picked it up and planted it on her right shoulder, dashed o to the seafront, and finally swung north to the mangrove section of the creek, from where she could spy on the world unseen.

The wind cooled her face. The kitten purred. Ayaana watched the dau. The cream-suited elderly stranger lifted his head. Their eyes connected. Ayaana ducked, pressing into the mangrove shadows, her heart racing. How had that happened?

“Ayaaaana!” Her mother’s voice was closer. “Where’s that child? Ayaaana? Must I talk to God?”

Ayaana looked toward the boat and again at the blackening skies. She would never know what landed first, the boat or the storm. She remembered the eyes that had struck hers. Would their owner tell on her? She scanned the passageway, looking for those eyes again. The kitten on her shoulder pressed its face into her neck.

“Ayaaaana! Haki ya Mungu . . . aieee!” The threat-drenched contralto came from the bushes to the left of the mangroves. “Aii, mwanangu, mbona wanitesa?” Too close. The girl abandoned her cover, splashed through the low tide to reach open sands. Ayaana scrambled from stone to stone, with the kitten clinging to her neck. She dropped out of sight.

The stranger, a man from Nanjing, saw a small creature soar against the backdrop of a black sky, hover, and then fall like a broken-off bough; as she did so, a long chortle erupted out of him. His fellow travelers, already sympathetic about his chronic seasickness, glanced at him with unease. It was not uncommon for seasickness to turn previously sane persons into lunatics. The man focused on the land, eyes active in his placid face. A cataract in his right eye gave it a luminosity in his balding head on his tendon-lined neck. He turned at the sound of a woman’s voice calling, “Ayaaaana!” Stomach roil. Craving the sense of land, he tried to measure the distance between the boat and the jetty, hoping that they would dock soon.

Fifteen minutes later, ill-fitting suit a utter, the visitor stepped o the boat. He had to wade through shallow water to reach the black sand shore. Even though anonymous hands helped him forward, he stumbled. His hands touched the soil. He swallowed air. Here were the rustlings of ghosts. Here was the lonely humming of those who had died far from home and had for too long been neither sought nor remembered. A brown hand dangled in front of his face. He took it. One of the sailors helped him up before handing over his single gray bag. The man intoned, “Itifaki imezingatiwa,” and then chortled at a secret joke.

The traveler blinked, uneasy and engulfed by redolent evening scents; oudhi spattered enchantment. His breath discerned bitter orange, sweet balsam, and the sweat of the sea blended in a dense air that also heated his bones. Succumbing, inhaling. He then tilted his head toward the hubbub of human arrivals. He heard the music of a rolling tide. He glimpsed an almost storm hovering on the horizon. What was this place? He ambled forward, heels rotating as if his toes had roving eyes. Pale light shone on a pink petal falling from a solitary and slender wild-rose bush. The man faltered. He waited for the petal to settle on the ground before reaching for it. Only then did he lift it to his lips, enclosing it in one hand while the other adjusted the condensed contents of a life that t into the canvas bag hanging from his shoulder.

Excerpted from The Dragonfly Sea. Copyright © 2019 by Yvonne Adhiambo Owuor. All rights reserved. No part of this excerpt may be reproduced or reprinted without permission from the publisher. 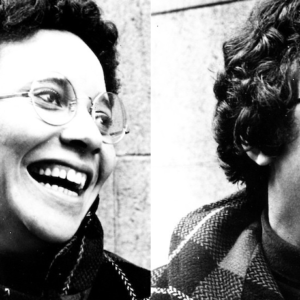 Lit Hub Daily: March 12, 2019 “No editing for the writer, no sense for the reader.” Our resident Kerouac skeptic close-reads his “Belief &...
© LitHub
Back to top