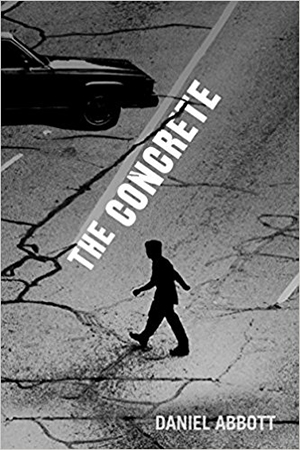 The following is from Daniel Abbott's debut novel, The Concrete. Set in an impoverished area of Grand Rapids, Michigan, the novel follows the Carters and their foster sons, Isaac and Miles. The two boys share a dark past, though neither of them are aware of it. Daniel Abbott’s writing has appeared in the Noctua Review, Ginosko Literary Journal, and Owen Wister Review.

Isaac Page rides shotgun in a Chevy Cavalier. Backpack between his feet. The Grand River behind him. The tall business buildings flanking its banks disappearing in the car’s rearview mirror. Isaac’s hooded head rests against the window. He watches his breath appear and then fade into the glass. Almost twelve years old now, Francis Street behind him, Isaac thumbs the tattered skin of the late Joey Cane’s basketball.

“We can get you a new ball.” The driver is a social worker named Doreen, a square-bodied black woman with shiny pink lip-gloss and micro braids. “One without the rubber showing through the leather.”

“No, thank you.” Isaac looks past Doreen and gazes out at the city. To his left is Veterans Memorial Park. A place where the homeless like to gather. They lean against pillars. They sit on the edge of a fountain. One man lies in the grass with his head propped on an Army duffel, sipping from a pint of Five O’Clock vodka. Beyond the park is the public museum and beyond that is Grand Rapids Community college, the place where Isaac’s parents met, when Frank Page was a janitor and Nelly Terpstra was a Calvin College exile. But Isaac doesn’t know that story.

Isaac has already been briefed. The dad: a former high school football star turned truck driver. The mom: a schoolteacher. The foster brother: another hard-luck kid like he is.

“I mean it,” Doreen says. “I’ve known Mae Carter for years, Isaac. It won’t be like the group home, I promise.”

The group home: Fight back or get beat down daily. Fight back or they take everything that matters to you. Break a bully’s nose and they leave you alone.

Doreen makes a right onto Jefferson Street and guides the Cavalier into the bowels of the southeast side. They pass aging brick buildings with concrete lawns. They travel over pot-holed roads. Past the Kent County Human Services building, a three-story tomb of brick and glass, its sidewalk perimeter stained with cigarette smokers, curb squatters, people walking back and forth talking to their hands.

Houses are pinched together with only feet between them, paint peeling like sunburnt skin. Porches lean. Sidewalks are cracked and raised by roots. Chain-link fences sag and bend. Brittle brown grass is dying on unmowed lawns. The Cavalier hooks a left onto Griggs and brakes in front of a powder blue house with a concrete porch. Doreen doesn’t look at Isaac when she says, “We’re here.”

Jackson Carter sets Isaac’s suitcase on the living room floor. His beige head is shaved bald and casts a baby oil gleam. Two days’ stubble surrounds a snarly black goatee. He looks like a giant to Isaac, like a power forward, or an out-of-costume Batman. Jackson’s smiling but his eyes are cold. Like his face is fixed in a permanent state of motherfucker, please. Isaac knows this look, knows the numbness. A look like Jackson has seen life’s worst and has emerged scathed and changed. A look that Joey Cane had.

Mae Carter is tall and slim and light-skinned. Soft spoken. Her breath smells like orange Tic Tacs. Isaac notices a small scar on her left cheekbone and wonders how she earned it; imagines her in a slapping match with another girl, or falling off of a banana-seat bicycle and going face-first into the sidewalk.

The foster brother, Miles is a handsome long-limbed kid with light brown skin, a sly smile. He hovers on the edge of the room, a smirk lurking in his silver eyes. Isaac wonders how Miles landed at the Carters. Wonders his history, what he’d been through—why, after whatever he’d been through, he’s standing here now smiling, like the past never happened.

The Carters’ place is strange and friendly. Isaac feels as if he’s slipped into a dream, or another world. It scares him, what seems like a functional family—he’s so used to hiding in Joey Cane’s driveway, or his books, or his journals, unseen. He notices a massive stained-oak bookshelf that takes up most of a wall. There are hundreds, possibly a thousand titles organized by author. Isaac stands in front of it, running his index finger over bindings, checking them for dust, finding none.

Mae, watching Isaac, says, “Doreen told me you like to read, Isaac. If you want, you can have the far right corner for your own books.”

Isaac flinches when Mae touches his shoulder and she steps away. Isaac cradles Joey Cane’s basketball in his arm. The backpack strapped to him contains his own modest collection of books, (The Adventures of Tom Sawyer, The Adventures of Huckleberry Finn, The Hobbit, The Lord of the Rings Trilogy), and four spiral notebooks. Isaac tells her thanks, but no thanks without taking his eyes off of the shelves.

He is worried they will ask about his parents, but they don’t. They don’t ask about the group home he had lived in the five months before arriving here. They don’t ask him anything. Just watch him like he is standing in an invisible cage.

“Miles,” tries Mae, “has been with us since he was five.”

Isaac pretends not to hear her. He thumbs through Mae’s books, books he’s never heard of, authors he’s never heard of, still hiding under his hood, rolling the basketball against his ribs. The Carters study his silence. They urge Miles over to him with head nods and hand signals. Jackson Carter clears his throat.

Isaac taps it with his own. “Hey.” Isaac sees Jackson put a bulky arm around his wife, sees Mae Carter smile.

“Miles,” says Mae, “why don’t you help Isaac bring his things up to the room?”

“They didn’t ask a lot of questions at the group home. They just assumed you were the same kind of unlucky as they were: orphaned or abused or neglected.”

Isaac follows Miles up the stairs and into their shared bedroom. The walls on Miles’s side are plastered with magazine cut-outs of rappers and athletes and half-naked women. Miles sets Isaac’s suitcase on one of two beds and shows Isaac which dresser and closet is his. Isaac places Joey Cane’s basketball next to the suitcase and begins unpacking his clothes. He puts socks and boxer shorts into drawers, hangs shirts and pants in his closet, which is empty besides a couple dozen thick plastic hangers.

“Silent type,” Miles says. “That’s cool. I’m telling you now, though, you better keep that hood off in the house or Jackson’s gonna kick your ass.”

Isaac peels back the hood and picks up the basketball, flips it in his hands.

“Some asshole.” The same response Joey Cane had given him. Two words. Two nails in a coffin. Case closed.

“Fuck you got some asshole’s initials on your ball for?”

“It was my friend’s ball. He wrote the initials on there.”

Miles thoughts go from brain to mouth, no filter, harmless but annoying—like his words are a finger tapping against Isaac’s mind.

“This your first foster family?”

“What about your parents?”

They didn’t ask a lot of questions at the group home. They just assumed you were the same kind of unlucky as they were: orphaned or abused or neglected. Handed to the State of Michigan with an invisible Treat With Care sticker stuck to your forehead and herded into the system.

“My mom had a deal with Motown but she got shelved,” says Miles. “You know what shelved means?”

Isaac shakes his head. Those loud knocks. All that blood. The light in his mother’s eyes gone.

“They didn’t put her album out,” says Miles. “They sat on it for a couple years and then dropped her. Then she started stripping and got all messed up on drugs. That’s how I ended up here.”

Isaac shuts off his mind and focuses on Miles. He doesn’t know how to respond. Miles doesn’t seem too bent about his ordeal. He speaks like he’s reciting facts from a book, like he’s summarizing someone else’s life story.

“Last year they found her floating in the river. Just another dead junkie. The Carters didn’t tell me that,” says Miles. “My daddy did. And Jackson don’t like him. One time he came down here and Jackson snatched him out of his Cadillac and beat the shit out of him. My daddy threatened to come back and kill Jackson, but he let it slide. He still comes around from time to time—catches me out at Garfield Park, gives me a few dollars. But like I said, Jackson don’t like him, so you gotta keep that secret, okay?”

Isaac wonders why Miles isn’t living with his dad if his dad is around. Wonders where Frank is. Wonders if he’s still alive. First Joey then Nelly. Too much death.

Isaac agrees to keep Miles’ secret with a nod.

“The Carters are cool, Bro,” Miles keeps on. “Jackson don’t play, though. Disrespect that man and he’ll put you on your ass. Mae’s like Claire Huxtable—but this ain’t the Cosby Show. She can be as sweet as she wanna be, but when Jackson hits that bottle the walls start shaking around here. Trust me—you see Jackson drinking Hennessey and Coke, keep your distance.”

“Hey, Bro, you feel like going up to Garfield? You wanna hoop?”

“Sure.” Isaac stuffs the last of his clothes into the dresser and picks up the ball. He stands there looking at Miles like he needs permission to leave the room. Miles leads him down the stairs.

“Hey,” Mae says, “you guys are leaving?” She ‘s aproned and oven-mitted. Smiling and motherly. Miles was right: Mae Carter is a sit-com mom. Not like Isaac’s mother was, with her forced smile and worried eyes, waiting until she thought Isaac was asleep and then slithering out of the house and into the night, past Joey Cane’s and down the street to who-knows-where.

“Dinner’s at six.” Mae’s smile is real and it’s weird feeling wanted. Like they bought him from a store. From Goodwill. Like the Carters walked through the aisles of the second-hand mart and saw something with potential. Like Isaac was a thing they could bring home and polish, tinker with, see what they could come up with.

From The Concrete. Used with permission of Ig Books. Copyright © 2018 by Daniel Abbott. 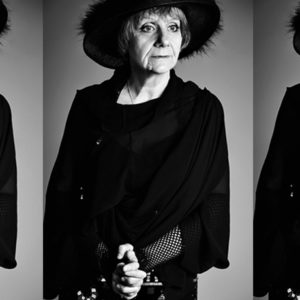 Lit Hub Weekly: May 21 - 25, 2018 Philip Roth has died. Read him in conversation with John Freeman about mortality (and other things), on the time he...
© LitHub
Back to top