Even its name feels literary: an evocation, a burning bush.

As an infamous summer outpost for queer New Yorkers, located some 60 miles away from the city off Long Island’s southern shore, Fire Island is a landscape filled with stories and secrets. Though the jury is out about the origin of its name—some believe it is a transcription error, and others that it alludes to fires lit by the Secatogue tribe to signal to the mainland, or false signals set by pirates to lure unwitting ships—this name seems to accommodate all of these textures and then some. It suggests an island-as-beacon, signalling ecstasy and luxury.

To research this place, as I am learning in the course of writing a book about its literary history, is to find it cropping up throughout American letters, like an open secret. Funny, then, that the story of writers on Fire Island might be said to begin with visitors from further afield.

During his 1882 tour of America, Oscar Wilde is believed to have stayed at the Perkinson Hotel in Cherry Grove, one of the island’s fashionable holiday hamlets which, along with its more expensive neighbor, Fire Island Pines, would gradually become known as a queer haven in the earlier part of the 20th century. (It’s worth noting that “Fire Island,” at least when invoked in an LGBTQ context, is often meant as a shorthand for the Grove and the Pines in particular.) It feels fitting, if not historically felicitous, to imagine Wilde as the patron saint of the island’s later iterations, cutting a flamboyant figure on its gay beach avant la lettre. Many years later, in the period just prior to Stonewall, the Mattachine Society activist Craig Rodwell worked a summer bartending on Fire Island to raise money for New York’s first gay and lesbian bookstore, which opened in 1967 and was fittingly named the Oscar Wilde Memorial Bookshop.

W.H. Auden rented a beach house at Cherry Grove in the 1940s with his friends James and Tania Stern, and Stephen Spender and Christopher Isherwood visited in the summer of 1947. Auden’s 1948 poem “Pleasure Island” observes a visitor who arrives on the shore “intending to make its quiet/Emptiness his ally/In accomplishing immortal chapters,” and gestures to one of the central ironies of much holiday writing: how, and from what vantage, do you write about a place intended to distract you from the labor of creative production? This unsuspecting writer, lured by the island’s carnal pleasures, “lets his book drop” in order to observe “bosom, backside, crotch.”

For Auden, the problem with this burgeoning gay beach culture was not only that it was a distraction. It seemed to him somehow sinful or fatalistic, and not unlike the Freikörperkultur movement in Germany, the nudist free-body culture that became intertwined with National Socialism in the years leading up to the Second World War. As Auden implied in his 1933 masque The Dance of Death,  it seemed as if a culture that worshipped the body in its natural habitat could all too easily tip over into a fascistic cult, one that came to equate athletic bodily ideals with the purity of the body politic. The speaker of “Pleasure Island” is correspondingly morbid in illustrating that the “Lenient amusing shore/Knows in fact about all the dyings.”

For Frank O’Hara, the island was a place where hedonism could be balanced with reflection, where joy co-existed with the space to ruminate upon mortality.

In the 1950s and 60s, poet Frank O’Hara also contemplated questions of life and death on the island’s shores. (O’Hara was in fact fatally struck by a buggy on the island’s beach in 1966 at the age of 40.) He wrote a series of elegies for James Dean on Fire Island in 1955, using its sand to write a “leaving word in the sand, odor of tides: his name,” before returning to New York, where the “city flatters meanings of my life I cannot find.” (That same summer, Truman Capote also rented a house in the Pines to work on a little novella he would later call Breakfast at Tiffany’s.)

For O’Hara, the island was a place where hedonism could be balanced with reflection, where joy co-existed with the space to ruminate upon mortality. It offered repose from the hectic and over-determined “meanings” of urban life. Fire Island was somewhere over the rainbow—a place where you could look up and see a “nickelodeon soaring over the island from sea to bay.”

But these were still the years before the rainbow was an explicitly political symbol for gay liberation. The subsequent decade of drugs and disco might then seem, at first glance, to be the island’s Golden Age. Some of the best-known gay novelists of the 1970s, including Edmund White, Andrew Holleran and Felice Picano, writers who later formed the Violet Quill collective in 1980-81, used it as a setting.

But Fire Island emerged from its 70s literary outings as a risky and even melancholic space. Holleran’s 1978 novel Dancer from the Dance, re-issued this June by Vintage Books with a Tom Bianchi cover and a new introduction by Alan Hollinghurst, figures Fire Island as a dazzling, intoxicating purgatory that inspires suicidal and self-destructive devotion amongst its “herds of stunning men.” It is known by some characters as “Dangerous Island,” because “you could lose your heart, your reputation, your contact lenses.” And the final hundred pages of Larry Kramer’s controversial Faggots (also from 1978) paint life on the island as an abject farce of fucking, fisting, and father-son wrestling in the Meat Rack, the infamous wooded cruising area between the Grove and the Pines.

By troubling the island’s paradisiacal status, albeit problematically, these novels ward against a nostalgic framing of the 70s as the utopic calm before the storm of what followed. In the years of HIV/AIDS, Fire Island was once again imagined, and with some urgency, as an elegiac landscape. Various texts written during and after this period, including poems by David Groff, Walter Holland and Mark Doty, Allen Barnett’s 1990 short story “The Times as It Knows Us” and Craig Lucas’s screenplay for the 1989 film Longtime Companion, use the island’s setting to eulogise friends and lovers and reflect upon the personal and political implications of the epidemic.

The readily available arc of Fire Island’s literary history follows an all too familiar pattern, comprised as it is of white gay male authors.

More recently, in an age of preventative HIV medication like PrEP, Fire Island has been no less conspicuous as a literary locale. It features prominently in Matthew Lopez’s two-part play, The Inheritance (2018), and Jameson Fitzpatrick’s charming O’Hara pastiche, “A True Account of Overhearing Andy Cohen At Fire Island” (2017), a poem that speaks comically to the island’s present-day glitziness.

Fire Island thus seems, from this tapestry of representations, to be a curiously ambivalent place: a beautiful diversion, at once liberating and deleterious. Yet this already partial and potted history presents its own problems. It is too neat. It misses out smaller and stranger texts, the neglected entries that might equally be a part of Fire Island’s literary canon. The 1968 novel Mr. Ladybug, for example, a witty and biting portrait of the island lifestyle published under the pseudonym “Becky Crocker,” is now largely forgotten, as is the charismatic Welcome to Fire Island, a non-fiction book written by activist Jack Nichols in 1976. Both Anthony J. Ingrassia’s play Island, whose 1972 production starred Patti Smith and Cherry Vanilla, and George Whitmore’s 1980 play The Rights, have been rendered similarly obscure.

But more than this, the readily available arc of Fire Island’s literary history follows an all too familiar pattern, comprised as it is of white gay male authors. A corresponding lesbian literature of Fire Island, for example, appears scarce, as do works which go beyond the satirical racial politics of Mr. Ladybug or the fetishism of Dancer from the Dance in speaking to the experiences of people of color.

In her seminal study Cherry Grove, Fire Island: Sixty Years in America’s First Gay and Lesbian Town, anthropologist Esther Newton identifies the troubling stratifications within the island’s community. Even though, Newton writes, there was a growing sense in the 1960s that “sexual orientation constituted a broad and compelling common identity more important than the categories of class, race, ethnicity, and gender,” many of the white gay and lesbian gatekeepers of Cherry Grove were “suspicious and often disdainful” of other social groups and “did not value diversity for its own sake—quite the opposite.”

In this sense, the island’s literary history provides an analogy for the place itself and for the way that spaces of escape and escapism might in turn be spaces of erasure and exclusion. Fire Island is a landscape full of stories, but it seems that some of them, perhaps many, have not yet received the attention or visibility they deserve.

Jack Parlett is a writer, poet, and scholar. He is the author of The Poetics of Cruising: Queer Visual Culture from Whitman to Grindr, published by the University of Minnesota Press and Same Blue, Different You, a chapbook. He holds a Junior Research Fellowship at University College, Oxford, where he teaches American literature and literary theory. His essays have appeared in Poetry London, Lit Hub, and elsewhere. He lives in Oxford. His new book Fire Island is available now.

How Many Copies Did Famous Books Sell in the First Year? 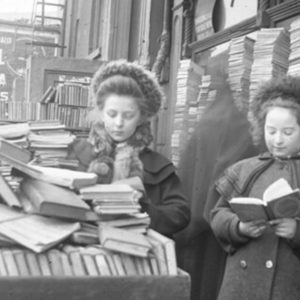 How Many Copies Did Famous Books Sell in the First Year?

Book publishing can be a tricky—and fickle—thing. Some of the classics we know and love today were instant bestsellers...
© LitHub
Back to top