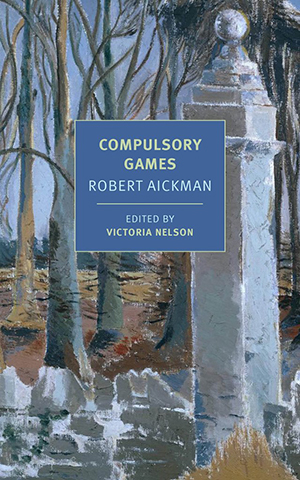 The following is from Robert Aickman's story collection, Compulsory Games. Robert Aickman (1914–1981) wrote eight collections of self-described "strange stories," as well as the novel The Late Breakfasters and the posthumously published novella The Model. An advocate for preserving and restoring England's canal system, in 1946 he cofounded the Inland Waterways Association.

During the thirties Jessica Yarrow had found a publisher for no fewer than four volumes of verses, and the pleasant little parties in her studio had led to her being regarded with affection by many of the more subdued Bohemians; but now, it being 1941, she had been in the Women’s Land Army for nearly a year, and seemed to have only a single friend in the world, her resigned fellow-sufferer, Bunty Baines, daughter of a veterinary surgeon in Shropshire, and one to whom animals and the land seemed truly the order of nature. Mr. Honister, the farmer, a widower and a Methodist, worked both of them as strenuously and as systematically as he could. At Christmas, even Bunty had revolted at the sombre, elderly festivities (to which, moreover, they had barely been invited); and the two women found themselves on a long lonely walk together across the bulrush-green fells. Their land girls’ costume stood them in good stead against the heavy, ranging gusts which blew from horizon to horizon every other minute, but they had been able neither to bring much food nor to find shelter in which to eat with comfort the little they had. They had eaten as they walked; but they had started early in the hope of avoiding

arguments, and once more were hungry when, shortly after half-past three, the heavy wind fulfilled its threat of heavy rain.

Jessica had never seen such rain. “We must get out of this.”

“Look!” Jessica pointed to a small wooden cabin which stood alone and exposed on the hillside.

The two women ran towards it, down and up the intervening fold in the hills.

The windows were boarded up, but there were the remains of a primitive verandah. The two women pressed themselves against the black dilapidated woodwork while the rain beat at them. It was darkening all the time with the premature-seeming darkness of Christmas Day.

Suddenly Jessica noticed that the door of the hut was open. Standing in it was a very large elderly woman with grey hair drawn back into a bun, and strong bony features. She was muffled in a vague, navy-blue wrapper, and appeared indifferent, perhaps habituated, to the weather. She was looking at the two land girls from grey commanding eyes.

“I should come in if I were you.” She spoke in the accents of the district, but with much self-possession.

They entered. The cabin, small though it was, appeared to be divided into at least three compartments by partitions of dark wood. The outer door led into a centre section; from which other doors opened on either side. The windows being boarded up, the tiny chamber was lighted, it was to be presumed at all times, by a single oil lamp hanging from the roof. The lamp was cheap, crude and old; its chimney grimed; its illumination wavering.

“I should take off your coats and sit down.”

Although the room seemed unheated, they removed their heavy waterproof. The only place to sit was on planks, unusually dark and roughly hewn, which stretched between trestles on the far side of the room. Jessica expected the planks to bow when they sat on them, but in fact they remained as firm as the trunk from which they had been cut. Jessica now perceived that the table which filled the rest of the room was a carpenter’s bench. It was deep in dust.

“I should have some tea.”

“We couldn’t possibly trouble you on Christmas Day,” said Jessica.

But Bunty’s knee struck her sharply; and in any case the elderly woman had disappeared through the door on the right.

“I’m dead,” said Bunty. She looked around. “Do you think she lives here permanently?”

Jessica, faithful to the habits of a lifetime, was combing her wet hair. She found it impossible to see in her little mirror. She said nothing but “God knows.”

“I wonder if she’s good for an egg,” continued Bunty. “I could use an egg.”

“No hens,” said Jessica, trying to smarten her tie.

In a moment the elderly woman was laying tea on the dusty carpenter’s bench. The cheap white china was chipped and cracked; the teapot spout jagged as a broken tooth. The genteel penny bazaar knives were serrated and rusty.

Jessica lifted the pot to pour. Immediately she realised that it was empty. Plainly, also, there was no food of any kind. Even the sugar basin contained only a discoloured slime.

The elderly woman was silently watching them from her grey commanding eyes.

“At the elderly woman’s call, the remaining door in the room opened for the first time and disclosed a small bent figure in working clothes . . . His hands were shiny with beeswax. He nodded affably to each of the land girls in turn, then beckoned.”

Jessica perceived that she could prevent them from working round the heavy carpenter’s bench and reaching the door. For a moment she thought; then she put down the teapot.

“I’m so sorry. My friend and I both take milk.” The elderly woman nodded and retired.

“Come away,” said Jessica, more softly than a mouse. “Bring your mackintosh.”

But Bunty was tightening her belt, and this delayed them, so that before they could reach the door the woman was back. Bunty screamed sharply. The woman had discarded her navy blue wrapper and was dressed in the uniform of an old-fashioned policewoman, with tunic and long skirt. Jessica associated the costume with the previous world war.

“I shouldn’t try any funny business.”

She had her back to the door. In the heavy clothes she looked more massive than ever. Her voice was sharply menacing.

“When my father passed away, his job became mine. I’m the only village policewoman in England. You didn’t know that, did you?”

Jessica could only shake her head; but she was trying to think. She noticed that Bunty was very pale, and seemed as if under a spell.

At the elderly woman’s call, the remaining door in the room opened for the first time and disclosed a small bent figure in working clothes. Occasional long grey locks hung from under his black cloth cap and his trousers were strapped beneath the knees. His face was old and yellow, but he was smiling like Mr. Punch. His hands were shiny with beeswax. He nodded affably to each of the land girls in turn, then beckoned.

“I should have a look,” advised the elderly woman. Neither of the girls moved.

“I don’t want to have to use the darbies.” Jessica saw that she held two pairs of heavy handcuffs.

The old man beckoned again. “Easy does it,” he said in a voice like a small cracked bell. They went in.

The inner room was lighted by four tallow candles, the bases of which had been liquefied and stuck on the floor. Placed so that there was a candle on each side of them, were two open coffins. They seemed made of the same dark wood as the rest of the place, and they were deeply and newly padded with glossy, blood-red satin. Set upright behind them stood their tops, each with a polished and engraved silver plate, which reflected rectangles of light from the candles on to the wooden walls of the room. The elderly woman was again in the doorway behind the two land girls.

“Do you know what this is?” Mr. Honeyman was holding out a very long, very thin knife which conjured the reflections on the walls to harlequin activity. “This is a coffin maker’s knife. There’s only one place I know where you can get them.”

“Shall I prepare them, Mr. Honeyman?” enquired the elderly woman.

“I’m quite agreeable, Hagan,” said Mr. Honeyman. “After all, I only work on Christmas Day.”

It was beginning to thunder.

“Look at this,” cried Mr. Honeyman in his cracked triumphant voice. He had laid down the knife and was bringing up a wheeled object from the dusky corner of the little room. It was heavily though tastelessly carved in the same dark wood.

“You don’t see a thing like that every day.”

He was standing behind the cabinet, so that only his head and yellow face appeared above it.

“It’s full of live silkworms. They’re necessary in my business.” As he spoke he was unrolling a bale of soft white silk.

The two land girls were clinging together.

“I should take off your ties,” suggested the elderly woman. Jessica saw that she had put down the handcuffs, and held in one hand a tiny piece of thin red string, such as chemists use for small parcels.

Still as if spellbound, Bunty began to comply. She took off her tie, and unbuttoned her shirt to the waist.

Suddenly Jessica’s hands, rough from the fields, were round the old man’s throat. In a moment the long thin knife was hers.

Instantly the elderly woman was blowing her police whistle. She blew rendingly, mercilessly, until it seemed that the elements outside the tiny dark cabin picked up the alarum. There was a screaming, cleaving crash and a bright white light. The storm had struck the exposed hut. Or perhaps it had not been thunder but guns.

Jessica awoke in what she took to be a hospital. Certainly there was a nurse standing by her bed.

Jessica was not in pain, but, on the contrary, felt wholly and completely numb. Outside they were faintly singing “Auld Lang Syne.” Perhaps it was New Year’s Eve.

The woman, Jessica reflected drowsily, must be not a nurse but a sister, as she was middle-aged and wore a dark blue dress buttoned to the chin. She held a hypodermic syringe, larger then Jessica had ever seen; but it appeared to be empty.

5 Books You May Have Overlooked in April

Nine of the Most Violent Works of Literary Fiction 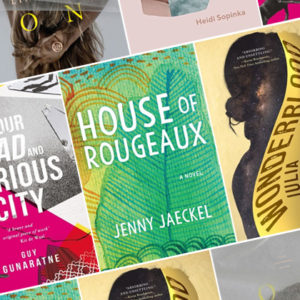 5 Books You May Have Overlooked in April Modern multiracial London, a Caribbean colonial sugar plantation, an undefined afterlife, pre-WWII England, and a dystopian...
© LitHub
Back to top