Advocating Illegal Violence and Undermining Equal Protection of the Laws

What follows is one of multiple cases for impeaching the president, as laid out by Ron Fein, John Bonifaz, and Ben Clements in The Constitution Demands It.

Since entering office, Donald Trump has urged police to be “rough” with suspects, given aid and comfort to neo-Nazis and other white supremacists, and suggested that the military should commit war crimes against Muslims. Coming from the president, words matter.

On July 28, 2017, in a speech to police officers, Trump openly encouraged police to be “rough” with people they arrest:

And when you see these towns and when you see these thugs being thrown into the back of a paddy wagon—you just see them thrown in, rough—I said, please don’t be too nice. (Laughter.) Like when you guys put somebody in the car and you’re protecting their head, you know, the way you put their hand over? Like, don’t hit their head and they’ve just killed somebody—don’t hit their head. I said, you can take the hand away, okay?

This speech was widely understood, including by police chiefs nationwide, as endorsing police brutality—that is, encouraging police to cause bodily harm to arrested persons and violate their constitutional rights. Furthermore, since statements by the president can establish executive branch policy, it also implies that the Department of Justice will, at a minimum, deprioritize enforcement of laws protecting the citizenry from police misconduct. Indeed, the Department of Justice appears to have done just that, by taking steps to end its investigations of, and remedial support for, local police departments with a history of police misconduct.

On August 12, 2017, Trump gave a statement after the white supremacist rallies and terrorist attack in Charlottesville, Virginia, in which one woman was killed and more than fifty people were injured at the hands of a self-proclaimed white nationalist. Trump criticized violence “on many sides, on many sides,” thus equating violent white supremacists with counterprotesters.

On August 15, he insisted that there were “very fine people” among the marching white supremacists.

On August 22, the president publicly bemoaned the firing of a CNN commentator for tweeting the Nazi salute “sieg heil.”

On August 17, the president tweeted: “Study what General Pershing of the United States did to terrorists when caught. There was no more Radical Islamic Terror for 35 years!” The president was almost certainly repeating an internet urban legend that he had recited during the presidential campaign:

They were having terrorism problems, just like we do. And he caught 50 terrorists who did tremendous damage and killed many people. And he took the 50 terrorists, and he took 50 men and he dipped 50 bullets in pigs’ blood—you heard that, right? He took 50 bullets, and he dipped them in pigs’ blood. And he had his men load his rifles, and he lined up the 50 people, and they shot 49 of those people. And the 50th person, he said: You go back to your people, and you tell them what happened. And for 25 years, there wasn’t a problem. Okay? 25 years, there wasn’t a problem.

While no evidence supports this anecdote about General Pershing, if military service-members did anything like this today, their actions would likely constitute war crimes. An imperative to “study” this incident issued by the president, whom the Constitution designates as “Commander in Chief of the Army and Navy of the United States,” cannot be dismissed as merely a suggestion that the history faculty at the military academies should add it to a course syllabus. To the contrary, the president’s imperative could be interpreted as an order to commit war crimes.

On November 28 and 29, 2017, Trump shared three inflammatory and misleading anti-Muslim videos on Twitter. He retweeted three posts by a leader in Great Britain’s far-right “Britain First” party who had previously been convicted and imprisoned in England for religiously motivated harassment. After the president’s tweets, British prime minister Theresa May stated: “It is wrong for the president to have done this. . . Britain First seeks to divide communities by their use of hateful narratives that peddle lies and stoke tensions.” The aid and comfort to white supremacists in the United States constituted by the president’s tweets was unmistakable.

For example, white supremacist leader David Duke welcomed the president’s tweets with the message “Thank God for Trump! That’s why we love him!” Furthermore, the anti-Muslim bigotry evident in Trump’s suggestion, when combined with his campaign promise for a “total and complete shutdown” of Muslims entering the country and his administration’s various immigration orders that have been held by multiple federal courts to discriminate against Muslims on the basis of religion, foments religious hatred and undermines the constitutional guarantee of equal protection of the laws.

Trump’s conduct here does not correspond to a specific statutory crime. Unlike, for example, obstruction of justice, these actions probably could not land Donald Trump in prison after he is removed from office. But impeachable offenses are not just crimes. And the president’s conduct flies in the face of at least three constitutional obligations.

First, he has a duty to “take care that the laws be faithfully executed.”

Second, he has a constitutional obligation to protect the citizenry against “domestic Violence.”

Third, he has an obligation to ensure that the federal government (and, less directly, state and local governments) not “deny to any person within [their] jurisdiction the equal protection of the laws.” That includes not giving aid and comfort to white supremacists and neo-Nazis in their efforts toward aims that the Supreme Court has called “directly subversive of the principle of equality at the heart of the Fourteenth Amendment.”

No previous president has ever tested these principles as severely as Donald Trump; consequently, there is no directly applicable precedent. But taken as a whole, this pattern and course of conduct constitutes an abuse of public trust that justifies a congressional investigation and hearings on whether impeachment is warranted. As Professor Laurence Tribe and his coauthor Joshua Matz have noted, “[w]holly apart from what a court would say, Congress is free to decide in an impeachment hearing that some of Trump’s public comments have violated [constitutional protections including] the Equal Protection Clause.”

The president’s open advocacy of illegal violence—evidently endorsing police misconduct against arrested persons, and war crimes—violates his obligations to “take care that the laws be faithfully executed” and to ensure “the equal protection of the laws.” Furthermore, his expressions of sympathy and support to supposed “very fine people” who were marching alongside neo-Nazis and white supremacists in the streets of Charlottesville gives them aid and encouragement in the future. Trump’s words matter, and have led to what some call “the Trump Effect”:

A survey of more than 10,000 K–12 educators by the Southern Poverty Law Center found that the 2016 presidential election led to increases in “verbal harassment, the use of slurs and derogatory language, and disturbing incidents involving swastikas, Nazi salutes and Confederate flags,” with “[o]ver 2,500 educators describe[ing] specific incidents of bigotry and harassment that can be directly traced to election rhetoric.”

A peer-reviewed epidemiological study of the 2016 election found that cities experienced a 12 percent increase in assaults on days when Trump held a rally, as compared to days when there was no campaign rally.

The Center for the Study of Hate and Extremism at California State University San Bernardino found a sharp increase in the number of hate crimes in most of the nation’s largest cities from 2016 to 2017.

During the first half of 2017, there was a 91 percent increase in anti-Muslim hate crimes as compared to the same time period in 2016.

To be sure, hate crimes preceded Trump, and there are multiple lines of causation involved. But it requires willful blindness to deny that Trump’s advocacy of illegal violence and undermining of the equal protection of the laws has had a substantial harmful effect on the people of the United States.

BOTTOM LINE: The president has made a series of public statements that, together, constitute a dangerous pattern. For example, he has openly encouraged police officers to physically mistreat arrested persons; encouraged the military to execute Muslim prisoners of war; equated the violent white supremacists and neo-Nazis in Charlottesville, Virginia, with the protesters against them; and shared inflammatory anti-Muslim videos on Twitter from the account of a far-right white supremacist. Taken as a whole, this pattern of conduct violates his constitutional obligation to “take care that the laws be faithfully executed,” protect the citizenry against “domestic Violence,” and ensure “the equal protection of the laws.”

It is time for Congress to investigate whether to impeach President Trump for advocating illegal violence, giving aid and comfort to white supremacists and neo-Nazis, and undermining constitutional protections of equal protection under the law. 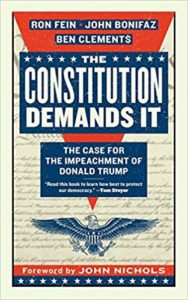 From The Constitution Demands It: The Case for the Impeachment of Donald Trump. Used with permission of Melville House. Copyright © 2018 by Ron Fein, John Bonifaz, and Ben Clements.

Ron Fein, Legal Director for Free Speech For People, is a constitutional lawyer who previously served as Assistant Regional Counsel in the U.S. Environmental Protection Agency, where he received the National Gold Medal for Exceptional Service. He appears regularly on television and in the op-ed pages of the Washington Post, commenting on constitutional matters.

John Bonifaz is the co-Founder and President of Free Speech For People. He previously served as the Executive Director and General Counsel of the National Voting Rights Institute, and as the Legal Director of Voter Action, a national election integrity organization. A distinguished attorney, he has been at the forefront of key voting rights battles across the country for more than two decades, and is a winner of a MacArthur Foundation Fellowship Award.

Ben Clements is the Chair of the Board of Directors of Free Speech For People and Chair of its Legal Committee. He is also a founding partner of the Boston law firm, Clements & Pineault, LLP. His clients have included state and federal governments, candidates for state and federal office, senior public officials, large corporations, and small businesses. He is a former federal prosecutor and former Chief Legal Counsel to Massachusetts Governor Deval Patrick. 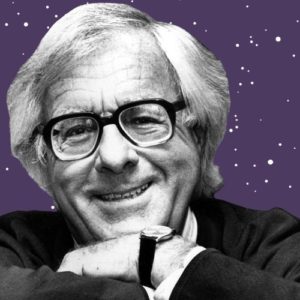 Today would have been the 98th birthday of Ray Bradbury, the greatest sci-fi writer in history, who (by no small coincidence)...
© LitHub
Back to top
Loading Comments...