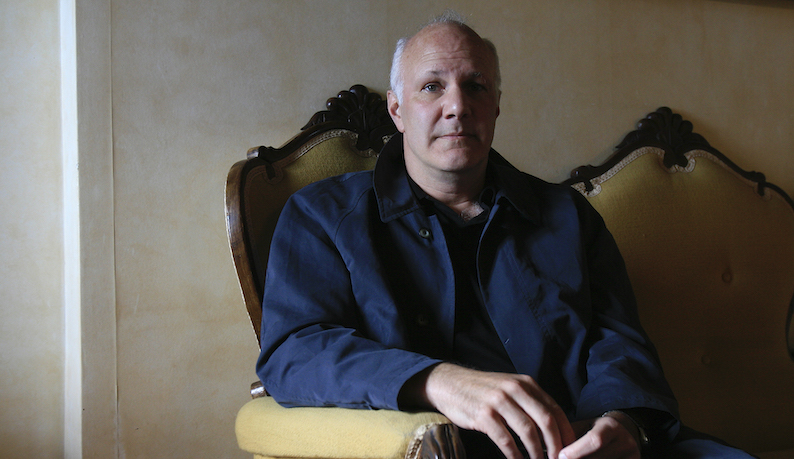 David Roderick Talks to the Author of Blizzard

Henri Cole was born in Fukuoka, Japan, in 1956. His previous books include the poetry collections Middle Earth, Blackbird and Wolf, Touch, and Pierce the Skin, as well as a memoir, Orphic Paris. He has received many awards for his work, including the Jackson Poetry Prize, the Kingsley Tufts Award, the Rome Prize, the Berlin Prize, the Lenore Marshall Poetry Prize, and the Award of Merit Medal in Poetry from the American Academy of Arts and Letters. He teaches at Claremont McKenna College. Follow him on Twitter: @ColeHenri.

David Roderick conducted this interview with Cole via email in late August.

David Roderick: Blizzard is your tenth book of poems. That sort of consistent productivity is rare among writers. I’m sure many more poems and books are to come, but are you tempted at all to look back and assess what you’ve accomplished?

Henri Cole: I am not really counting books. I don’t feel rare. I’m sure there are many poems that should be suppressed. I hope it’s true that I will keep going.

When I look back, I don’t think so much about myself as I do events in the world or the people I have loved. Nostalgia is death for an artist though. I hope people think I have worked hard.

DR: In your prose memoir, Orphic Paris (2018), you state your case against nostalgia. Sentimentality too, I think. How do you navigate those traps while dwelling upon the loss of the people you’ve loved? As you grow older, does avoiding nostalgia and sentimentality get any easier?

HC: In truth, I like and need these things—nostalgia, sentimentality, etc.—in life, but I do not need them in art. I am a hypocrite. I like hugs, too, but not in art. I’ll settle for tenderness, my favorite of these qualities, in life AND art. Aging hasn’t really toughened me. It has had the opposite effect. More and more, I feel like a sunflower that becomes a nice lunch for the squirrels…

DR: Your poems often show tenderness toward other creatures. Two poems from Blizzard that come to mind are “To a Snail,” in which you carry a snail safely across a road, and “To a Bat,” in which you release a trapped bat outdoors. In the book’s first 10 poems you mention bees, a horse, a cat, beetles, maggots, bottle flies, owls, a hedgehog, and a “psychedelic moth.” Does your interest in animals carry forward from childhood, or did it emerge later in life?

HC: I hope this isn’t a sign that I have given up on humans. I grew up in the Virginia woods, where I learned a love of creatures and plants. In nature, I don’t feel judged (this could be a gay thing), as I do out in the world. In nature, I am myself and feel the circumference of love. Perhaps, for me, nature is God.

The first poem I remember writing was for my pet chicken Penelope. Writing about nature is a way to come at private feelings obliquely. I like obliqueness as much as I like pellucidness. Given a mask, we speak more directly to the truth of our predicament, someone once said. Nature can be a mask.

In nature, I am myself and feel the circumference of love. Perhaps, for me, nature is God.

DR: You’re more politically alert in this book. The third section of Blizzard is framed by a quote from Supreme Court Justice Harry Blackmun. It’s a passage from his dissenting opinion in the Bowers v. Hardwick case, when the Court ruled that “the constitutional right of privacy does not extend do homosexual behavior.” Other poems, like “Super Bloom” and “Gross National Unhappiness,” directly address our President. Is it a struggle to reconcile your roles as an artist and citizen?

HC: Not at all. One of the functions of the lyric is too look outward at the world or historical moment in which we live. Usually my poems look inward and present intimate snapshots of the self in moments of being, but even when I am looking outward and writing in a more public way, I can only speak for myself. I cannot speak for mankind.

DR: The free-verse sonnet has always been a favored form for you. Nothing to Declare (2015) includes just one sonnet, yet in Blizzard the form reemerges as the book’s dominant vehicle. Can you talk about what it was like to wander away from and then return to the sonnet?

HC: I don’t remember consciously wandering away from the sonnet in Nothing to Declare. Did I do that? Probably the sentences are the same. I do like skinny poems, especially with five-line stanzas, or cinquains. They are good luck to me, like five buttons on a dress shirt. A lot of poetry today seems prolix, as if written with the scroll button. But I want to hear something true within the first couple lines in a poem and then see it amplified in some original way and then arrive at a fresh idea before twenty lines are done.

To me, writing a sonnet is like swimming, and lifting my head out of water to fill my lungs, and then plunging back underwater as my arms pull me forward.

DR: Swimming isn’t just a keen metaphor in this instance. Are you still an avid swimmer?

HC: Oh yes, I’ve just returned from the Adirondacks. I try to baptize myself there every year and swim across a pretty lake to a rock. The magical water resets my brain. Especially in this time of touchlessness, swimming, which requires total immersion, is restorative. 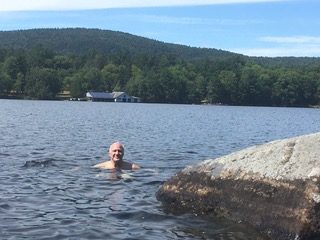 DR: Do lines or sentences ever come to you while you’re in the water?

HC: Sometimes lines do occur to me, but not often. And if they do, I don’t remember them afterward. When swimming, I sort of go into a trance, and I forget about writing. Swimming erases the disorder and conflict from my life. It’s an eraser, rather than a nice fountain pen. Sometimes I pretend I am Neptune, the mythical figure not the planet, though I know I am more like a porpoise. Neither can write poetry, but they have other assets…

DR: Does where you live (Boston, Paris, California) matter to your poems or to your writing habits?

HC: In my confinement, I have been writing prose in Boston. Most of my poems are written in France, where another language swirls around me. In Southern California, I am mostly a teacher, writing on student poems, writing letters of reference, etc. I live near the gorgeous desert and mountains, but the massive fires and lack of rain terrify me. In Boston, I live in a fifth-floor, walk-up apartment. No one visits, except a hawk with his/her mouse-burritos. In Paris, I am plunged into another existence and time, as if a hand had reached down and pulled me out of a box.

I feel nurtured by all these settings, but my home is Boston, where as I type this in early morning I can hear a sea gull that has flown over from the harbor, a city bus rushing by, and dogs gamboling in the park.

DR: My favorite poem in Blizzard is “At the Grave of Robert Lowell.” It begins, “On this tenth day of the year, I play Stravinsky / and sip vodka from a paper cup, taking in the view. / Tendrils twining, leaves rippling, guts absorbing nutrients, brains marked by experience—all of it is dust now.” The present is so palpable in this moment, but your rendering of the past is too. This poem seems to me one of the most joyful you’ve written.

HC: I was first taken to Lowell’s grave years ago by a young poet who is now middle-aged. Time will say nothing but I told you so. And I have returned to this remarkable New Hampshire cemetery several times on my own.

I am pleased you find the poem joyful. It’s difficult to write about satisfaction and pleasure—these feelings seem to require less verification in poetry than our grief does. I adore Lowell’s two books, Life Studies and For the Union Dead. Post-Freudian American poetry couldn’t exist without them.

DR: In the middle of the poem you write, “History is like an Impressionist painting, a variegated / landscape of emotional colors.” This is such an interesting thing to say in a poem inspired by Lowell, whose work often engaged with historical subjects.

HC: This might be something I’ve adapted or borrowed from a museum visit. I can’t remember. I am nurtured by art (also by writing about it). I like the idea of having an art historical statement in a poem, though of course a little exposition like this goes a long way in a poem. There are other moments like this in the book—it’s something I’m drawn to, and perhaps learned from the essay-like poems of Marianne Moore.

DR: I was surprised to see you pop up on Twitter a few years ago, probably because you come across as a poet who prefers peace and quiet over chaos. Has participating in that forum changed your views about language? Or the human species?

HC: My dear friend Joyce Carol Oates persuaded me to join the Twitter. I like being able to mute those I find cruel. I like putting beauty, kindness and silliness into the world. I try not to be mean, except in connection with our putative leader. Be kind is my motto, even though it’s sentimental. 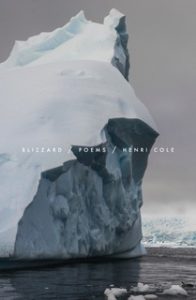 Blizzard by Henri Cole is available now from Farrar, Straus, and Giroux.

David Roderick is the author of two books of poems, Blue Colonial and The Americans. From 2017 to 2019 he wrote a weekly poetry column for The San Francisco Chronicle. A former Wallace Stegner Fellow and Amy Lowell Scholar, Roderick lives in Berkeley, California and co-directs Left Margin LIT, a creative writing center and work space serving writers in the Bay Area. 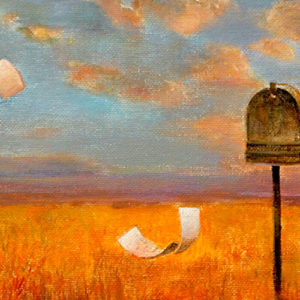 My favorite activity, my only faithful daily ritual, is to check the mail. My husband pokes fun, but whenever I’m not traveling...
© LitHub
Back to top
Loading Comments...