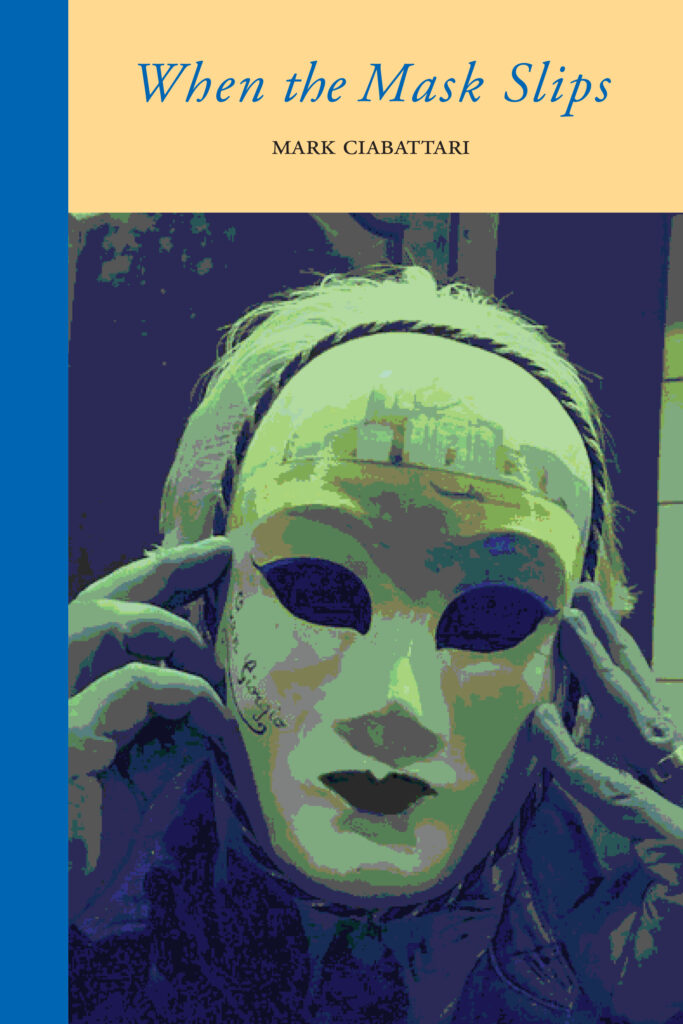 The following is from Mark Ciabattari's When the Mask Slips. Ciabattari is a cultural historian and author. He got his B.A. in modern European intellectual history at Stanford, his M.A. and Ph.D. in American intellectual and cultural history at New York University. He has taught at NYU, Yeshiva University, Mercy College, and several campuses of the City University of New York. With his wife Jane, also a writer, he lives in Sonoma County, CA.

Rizzoli and his beloved soul mate Phoenicia, his longtime live-in girlfriend, devised a book game long ago where one or both can play. Both love books and have shelves of them. Home alone this night, Rizzoli decides to play the solitary version.

Eyes closed, he will pick a random book. Open it out to a chance two-page fold. Read the pages. His reward can be a trite nothing or an insight, a stab of wisdom, note of caution. If warranted, he will think about it, then discuss his finding with his lover.

Tonight, eyes closed, he randomly chooses a book, then looks at its title: Difficult Loves, a collection of stories by Calvino. Opening it to a chance page, 119, he reads “The Adventure of a Nearsighted Man,” the title of a story he remembers enjoying when he read it some time ago.

He only vaguely remembers the story line. So he sits on the couch and reads the initial pages so he can find a possible topic for discussion with Phoenicia. But he has to think about it. He re-reads the story. Page after page, the near forgotten plot comes to the surface.

The world has lost interest for this still youthful man, Amilcare Carruga. Then he gets his first eyeglasses. His life regains its once lost excitement of color, detail, sensation, the secret allure of a woman passing. Everything distinctly visible is instantly overwhelming; he has to practice the art of selective focus.

After breaking his glasses, he has an identity crisis—what style of frame to select to make him more mysterious than just “a man who wears glasses?” The choice is thick, boxy black to conceal his features so people might be intrigued to know his real face.

Satisfied, he returns to his native city of V. after years away with the set purpose of finding the love of his younger life. On a very crowded Sunday stroll, the traditional passeggiata, he thinks he glimpses her, but he fears with his heavy framed glasses, she’ll never recognize him. He removes them; all is a blur. She is gone. He leaves V. forever.

Rizzoli finishes the story and starts closing the upright book. What! The hell is this!! PRINT is loose! he notes with fright, as he watches letters fall out of the book’s pages, swirling down onto the light-yellow carpet to settle in clusters and flecks at his feet.

A deep pain engulfs him with the shock of seeing all the fallen letters that only seconds ago made up the author’s uniquely original fifteen short stories!

Son-of-a bitch! Giving into this hurtful loss, he somehow feels that this book’s intention all along was to personally target me. Why? He flips through the pages to see if he can find, maybe a few words, a letter. Nothing. Book had no mercy.

He gets a hand broom and dustpan, then sweeps and sweeps until he’s emptied all the fallen alphabet letters into a small brown paper bag. He puts this bag in a large, lined straw wastebasket. He opens out the blank-page book and puts it inside the bag of useless letters, then covers over all of it with newspaper pages.

Tomorrow I’ll take it to the outside garbage. So Phoenicia doesn’t find it ruined and me not able to explain it.

The next morning, he and his beloved are at the kitchen table having their coffee and muffins when Phoenicia asks with an engaging smile. “So, when did we start leaving books strewn on the floor in this household?”

“What book?” He asks, joining in with her light laughter.

“You know, the Calvino I found lying on the rug near the waste-basket filled with paper bags and newspaper.”

Rizzoli explains the whole episode. She comes around the table, hands over the book, and gives him a little kiss, “Have you been dreaming again?”

He smiles. (Still doubt I was dreaming.) He opens the book and as he flips pages, he is assured all the print is back. Astonishing! Calvino’s meaning seeming fully restored makes him ecstatic. His smile shows it. Phoenicia smiles back.

It’s as if the alphabet itself had one mind that thoughtfully sent huge numbers of each one of its twenty-six letters back into their places to rewrite the exact book.

All the pages do seem right. Rizzoli sighs with relief. If all’s back to Calvino’s meaning I’m glad that the book’s mega-alphabet mind took her side. Yes.

Phoenicia, would you mind doing a read of the chance story I started and finished yesterday before I thought the book’s print let loose on me? “

“You mean last night when you dreamed the book’s print…’let loose’” she says, smiling at him. He nods in agreement. Still…

“First, let’s keep the rules of our made-up game. Any chance topic in that story’s first two-page fold out for the two of us to discuss?”

“Yes, a theme that did strike me was that no matter what, misperceiving can become a self-reinforcing, emotional belief.” Without going into detail about the plot, Rizzoli speaks of faulty perceptions at times leading to a strong but mistaken self-image or mood distortion.

Phoenicia wants to read the story. He tells her it starts on page 119 and she puts a bookmark there. That night she reads it and cries at the end, “It’s so good, but sad,” she says to him, “that Calvino story, ‘The Adventure of a Blind Man.’”

“Blind. Look!” She hands him the book.

She’s right about the title on page 119. He looks to the table of contents. All the other story titles are the originals, still starting with, “The Adventure of a…” and the nouns are the same, like, “of a Soldier,” “of a Poet” and so on. But Phoenicia is right, it’s ‘The Adventure of a Blind Man, ’not ‘Nearsighted.’”

Alphabet is screwing with me again, goddamn!

“I can’t deny yours is the right title,” he says.

Rizzoli wonders if the mega-alphabet has taken on its own independent mind to act and think, absent any human author. In this instance it chose a new, different use of letters and wrote an “original” story oriented more to Phoenicia’s taste.

In his earlier episode, Rizzoli thinks, the mega-alphabet first found the power to destroy all print meaning to make the book open to revision. Then it put it all back for her with the gift of a special, substitute story. Is the alphabet taking her side?

Rizzoli is flabbergasted that the alphabet mind changed the title of Calvino’s “Nearsighted Man”—to “Blind Man.” Has the alphabet gone rogue, making or erasing meaning independent of anything human? Is it some non-human authoritarian author creating, spelling? Playing to its own perceptions of the needs of its favorite readers? Is that it? Did one of those warp-brain techies come up with this?

“So, tell me your version of our story of the blind man, darling?”

“In short,” Phoenicia says, “this quite extraordinary woman, Lena Lombardi, falls wildly in love with the handsome blind man, Dino Rigotto, who sees her in his mind, her looks and body and face as alluring as her personality is charming. Beautiful! Then, an operation gives him back partial sight; he sees her more for real. But, he doesn’t realize his vision is still too vague to judge and rejects her.”

Rizzoli responds, “That sounds like the reverse plot of a famous old Charlie Chaplin silent movie, whose title I can’t think of.”

“Rizzoli, you must have read the same blind man story on page 119, right?”

Rizzoli is perplexed but still doubtful. “No.”

“Anyway, let’s not argue.” she continues. “Our discussion themes are much the same in each version, the blind man regaining partial seeing leads to a misperception and his firm belief he should wrongly reject her, causing the young woman real hurt and self-doubt, right?”

“The themes do sound familiar by your account, Phoenicia, but I know what I read.”

“Rizzoli, I refuse to argue anymore. It serves no purpose. You go ahead and imagine the print fell out and came back in your order.”

She is so articulate about these discussions (now I’m “imagining,” earlier “dreaming” my version) even when she read the wrong story. “You’re sure I’m wrong and I know you’ll try to find a good reason to convince me.”

“Now don’t get angry because your story is not there,” she laughs, covering her smiling mouth slightly. She loves to get my goat.

“I know I’m right; let’s go to the title page again.” Rizzoli opens to the page, and it reads, “The Adventure of a Nearsighted Man.”

“Whoa! See there, read this.” He points to the word.

He points and asks, “What is this name?” He answers himself. “Amilcare Carruga.”

She shakes her head, and points. “No, the blind narrator’s name is Dino Rigotto. Listen Rizzoli, I know I’m right, so why go on arguing?”

“Why are you so dogmatically sure you’re right?” “Because I am right. Look at the page.”

Each, in turn, reads verbatim the same page, 119; he emphasizing nearsighted; she blind. Each reads the start of two different stories. Alphabet mind’s taken over; changing the page version back and forth at warp speed.

“Too bad there’s no compromise,” she says.

“No compromise,” he says.

Both agree to disagree. Phoenicia puts the book back on the shelf.

In the night, as she sleeps, Rizzoli gets the book and checkspage 119. The title is, “The Adventure of a Color-Blind Man.”

Say nothing. Alphabet is the author.

Amsterdam is an Overstuffed, Inchoate Whodunnit 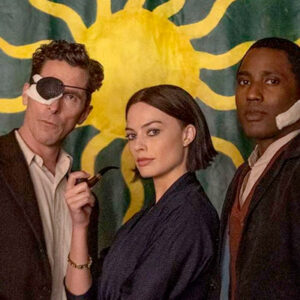 Amsterdam is an Overstuffed, Inchoate Whodunnit It is a widely circulating question in our current cultural moment: what to do when great art is created by terrible people?...
© LitHub
Back to top