The Brunist Day of Wrath 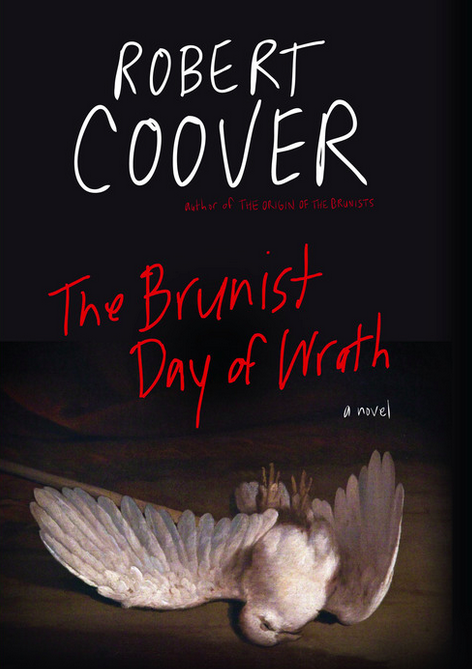 The following is from Robert Coover’s novel, The Brunist Day of Wrath. This long-awaited sequel to the award-winning The Origin of the Brunists, is both a scathing indictment of fundamentalism and a careful examination of a world where religion competes with money, common sense, despair, and reason. Robert Coover has published fourteen novels, three books of short fiction, and a collection of plays.

It is in such browbeating weather that West Condon prodigal son (there is an army of them) Georgie Lucci steps down off the bus from the city on his first return in nearly five years to the scene of his youthful indiscretions, somewhat nauseous from the long overnight ride, having sucked up half a case of cheap beer en route and fallen dead asleep only an hour before pulling in. He hardly knows where he is, only that he is getting fucking wet. At this unholy hour, the old corner bus station, where once he reigned as pinball king, is closed (he decorates its doorway with a pool of vomit, just for old times’ sake: Ciao, bambini, Georgie’s home!), as is the rest of the downtown, which he examines in a brief futile stagger, seeking shelter and a bite of breakfast, wearing his duffel bag as a ponderous rainhat. Not a soul on the streets, everything dark as midnight and shut up tight, some shops boarded up as though forever, the cold rain bombing down, the thunder and lightning giving him a headache. Fuck off, he groans, though to no one in particular, being no blasphemer, at least not by intent. None of his crimes have been, they’ve just happened. He tries the door up to the Legion Hall above the Woolworths, hoping some old pal might be sleeping it off on a couch up there, but that door too is closed to him, so he pisses on it, adding his bit to the flow flooding the earth. There are a few cars parked on the street in front of the broken penny parking meters, their junky antiquity bespeaking the town’s present economic circumstances. He tries their handles, no luck, the mistrustful bastards, so he breaks into a rusty old Ford station wagon and crawls inside, strips off his wet clothes and wraps himself in the woolly blanket he finds in the back. He still has a couple of beers in his bag, so it’s hair of the dog for breakfast or as a nightcap, whatever. Not for the first time in his long and unkempt life.

That’s about all Georgie remembers of time’s recent passage when he is jostled awake by the police chief, Dee Romano, and asked what the hell he’s doing there. “Ah, the welcoming committee has arrived,” he growls froggily. “You’ve unloosed some pretty unfriendly weather on me here in old Wet Condom, Demetrio, I had to get in outa the storm to save my life. Whose car is this, by the way?” “It’s my car, you stupid stronzo.” “I shoulda guessed. Only you could own a blanket that smells this bad.” “It’s my dog’s. He won’t appreciate that remark. And what have you done, thrown up in it? Merda! I may have to turn him loose on you.” “Well, I’m pretty hungry, it might be an even scrap. Why don’t you do the right thing, compagno, and go bring your honored guest some scrambled eggs and coffee?” “C’mon. Outa there, Giorgio. I got no time for wiseasses; I got too many problems. We’re shorthanded with Old Willie gone, our cruisers are falling apart and no money from the city to fix them, broken streets full of drunks and thieves, the damn Brunists back in town, trouble at the school—” “A chi lo dice! The Brunists! Them rain dancers are back?” “Yeah, they’re setting up shop out in the old summer camp on the road to Tucker City. From what I hear, you should be dressed just about right for them. But here in town it’s against the law. So get them rags back on and haul your ugly culo outa there. Now!” “Them rags is cold and wet, Dee. Listen, do me a favor. Arrest me and lock me up in a warm dry cell for a few hours. I deserve it.” “You want a roof over your head, Georgie, go to Mass.” “Mass? Is it Sunday?” “It’s Easter, you fucking cretino. Now move it!” “Okay, okay. Good idea, Dee. I’ll go to Mass. Easter. Whaddaya know. I’ll go confess to old Bags all the evil things I done, give him a rise. I got stories from the city that’ll burn his hangdog flappers off. But first gimme a lift over to my old lady’s so’s I can borrow her tub and clothes dryer.”

So that’s how it is that, in due course, the explosive news about the Brunists detonates upon the broad well-worn steps of St. Stephen’s Roman Catholic Church on this Easter morning. Several of the worshipers have gathered there before High Mass during a break in the thunderstorm, grabbing a quick smoke and grousing about the economy, the kids, the corruption at city hall, the weather, what’s ailing them, what’s ailing West Condon, the rest of the world, the cosmos, etc., and what can be done about it; namely, nothing. The plagued town, still mourning its dead from the mine disaster of five years ago, is in a state of terminal decay and depression, so broke it can’t fix the winter potholes or pick up the garbage. It has been bypassed by the new interstate, all the deep-shaft coalmines are closed, the downtown is emptying out and the car dealers are shutting down, the only hotel is an empty derelict, subsidence is sinking home values as if they could sink any lower, strip mines have torn up the countryside and polluted the water, the high school basketball team has won two games all season, the old coal-burning power plant is unstable and blackouts are frequent, prices are up, wages down for those who have jobs (not many), families are breaking up, friends are dying, the local newspaper has folded, TV reception is poor and there’s nothing on it but protests, wars, assassinations, corruption, riots, quiz shows and beer ads. Sal Ferrero and one-armed Bert Martini have been out at the hospital this week visiting fellow ex-miner Big Pete Chigi, who’s dying of black lung or something worse, and Sal reports that he’s in a respirator now. “Big Pete ain’t so big no more,” says Bert. “Damn coal dust,” is another’s mutter. “It’s not just the dust, it’s also them coffin nails,” says Guido Mello, grinding his out under heel, and Sal, staring dolefully with baggy eyes at the cigarette from which he’s just taken a drag, says, “I’m quitting tomorrow.” Mickey DeMars, whose downtown sandwich joint is closed for the day (the high price of meat has been the subject of his previous discourse, which aroused some surprise among his interlocutors that his hamburgers actually contain such an ingredient), says he heard on the radio that fully one-fifth of the nation was living in abject poverty. “That ain’t bad odds,” growls Vince Bonali, wallowing a dead cigar in his jowls. “Wish it was that good here.” Vince has recently lost his wife, has long since lost his job, and it’s said he’s drinking more than he’s eating these days. There’s a rumble of thunder and, peering up at the black sky, Carlo Juliano says, “It don’t stop. Better go home and build a ark.” “I would,” says Bonali, “but I can’t afford the mortgage.”

Which is when errant native son Georgie Lucci is spotted (he gets a welcoming shout) hurrying their way over the puddly potholed street and broken sidewalk like a tall clownish bird, bearing glad tidings, bad breath, lurid tales of nightlife in the city, empty pockets (cousin Carlo, when pressed, reluctantly loans him a five-spot), and the news that the Brunists are back, reportedly up to their old tricks out at the edge of town. This evangel draws a large eager audience, so Georgie, always the crowd-pleaser, elaborates on it, describing the Brunists’ ecstatic and diabolical rites in fulgid colors, details supplied by a stag movie he saw up in the city about a secret orgy society, and using the chief of police as the horse’s mouth. The ladies in the crowd peel away to spread the word among the others (“Monsignor Baglione must know!” gasps Mrs. Abruzzi, hurrying off in her sparse orange hair and the black widow’s garb she has worn for thirty years) and Carlo says maybe they ought to hide the Pincushion, popular name for their statue of St. Stephen, so the Brunists don’t steal it again.

So they’re back. Vince Bonali, gazing off toward the rainsoaked streets as though pondering their bleak future, feels a stirring of something commingled of nostalgia, excitement, mortification, and anticipation. When that insane cult first started up here, he helped his old high school teammate and town banker Ted Cavanaugh create the Common Sense Committee to try to put the brakes on. After the mine disaster, West Condon was in deep shit, and that end-of-the-world lunacy was the wrong story to send out to the world—Vince said as much in his famous “rock-dusting” speech at the first big rally, and Ted loved it. Ted runs this town, and Vince became his right-hand man. He was at the center of things and welcomed all over town, his pals were even calling him “the Mayor”—except for his days as second-team all-state tackle, it was the proudest moment of his life. And, after his stupid fuckup, the worst. Total humiliation. From king of the hill to the bottomless pit. Thinking about it still made Vince sick to his stomach, and he feels sick now. He’s not happy to see Georgie back in town. Georgie was there for it all, witness to his most shameful moments. Georgie has no pride. Sooner or later all those old stories are going to get retold. Just for laughs. Sick jokes from the past. Even now they’re yattering on about that mad carnival out at the mine (“At least we felt alive then,” someone says), the day he sank the lowest. But he has changed since then. Stupidity sometimes has more to do with heart than head. His re-found faith has centered him, put his reason right. Most know that and respect him for it. “You remember when old Red Baxter tried to lay into our altar with a mining pick?” “It was crazy! He called the church a whore!” When Vince’s wife Etta died a couple years back, Ted sent flowers. A sign of forgiveness? Angie works at his bank now. And he and Ted were WCHS teammates after all on the best football team in their division in the state. That’s what the big-city papers said. Maybe he should give old pal Ted a call, see if he needs any help. “Yeah, but remember what we done to their prayer barn afterwards!” Maybe he shouldn’t.

From The Brunist Day of Wrath. Used with permission of DZANC BOOKS. Copyright © 2017 by Robert Coover.

Where Can Hollywood's Reboot Obsession Go From Here? 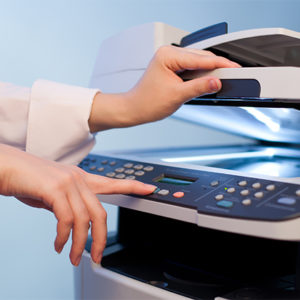 Where Can Hollywood's Reboot Obsession Go From Here? If 2017 is remembered for anything in entertainment, it might be the year everyone gave up on trying to stop reboots. Hollywood’s...
© LitHub
Back to top