The Book That Changed My Life

“Live through it,” Call said. “That’s all we can do.”
–Larry McMurtry, Lonesome Dove

In the summer of 1985, a book changed my life. My eighth-grade English teacher, Marcia Callenberger, gave me Lonesome Dove, just out at the time and yet to win the Pulitzer.

Though I’m not sure she realized it, I happened to be in a period of transition probably somewhat greater than that of the average soon-to-be high school freshman. My parents had relocated from southern New Jersey to a succession of houses in southern California three years earlier—a different house per year, in fact—eventually to attempt roots in the northern California Sierras, a destination which by necessity landed me in public school for the first time after a decade of fairly sheltered private Christian schools. At the same time my dad, a veteran of the Philadelphia Carpenters Union, began to build a sprawling, multi-winged custom home on ten acres, thirty twisting, serpentine, hill-and-dale miles from Placerville, the closest town of any size.

Looking back, I think my parents were in a bit of a transition themselves. Back in Jersey we’d been enmeshed for years in an End Times-obsessed Baptist church, with the central-casting charismatic hustler at both pulpit and helm. At the height of our involvement there—or nadir, depending on how you look at it—my brothers and parents and I wound up holding hands in a circle in the back yard of our tract house, after the hustler at the helm predicted the day and time of the Second Coming of Christ, with further instructions to watch and wait. We gave it maybe half an hour, there in our circle. I’ve never discussed it with my parents, but I’ve come to believe it’s no coincidence we were packed up and fleeing for the opposite side of the continent within a year.

This other house, the one under construction during my eighth-grade year, was intended to be my parents’ dream home, a place where they might spend the next five or six decades in something like the predictable, comfortable stability of the American Dream.

Unfortunately, things went predictably, uncomfortably awry. With the shell of the house put together and the exterior nearly complete my parents ran completely out of money, unable either to start on the interior, or to continue to rent elsewhere. I don’t think my teacher could possibly have known the odd particulars of my background in any complete sense, or the virtual brink my home life teetered on that scorching hot summer before high school. But surely she identified something, some wistfulness or curiosity maybe, or some potential she knew hadn’t yet been tapped or nurtured, or even recognized.

When the call came through we had just taken up residency in the bedroom wing of the unfinished house. Bare stud walls, stovetop and kitchen sink in a makeshift plywood countertop three feet from toilet and tub. For the next three years, my mother would have to cook dinner while I or my dad or one of my brothers took a dump or a leak or a shower literally right at her back, and vice versa. No insulation, and no heat other than a wood-burning stove temporarily installed in what the blueprint of the house designated as the master bath. But we did have a working telephone, and Mrs. Callenberger evidently had my number.

I’d always been a reader, ever since stumbling across an antique Bobbsey Twins book in the pastor’s office of the Baptist church when I was probably five. For most of my childhood I was limited to whatever could be had through the Christian schools—the Little House books, sanitized 1950s-era Hardy Boys and Tom Swift novels, the Chronicles of Narnia—although by the time I reached junior high I managed to get my hands on a pretty good trove of Agatha Christie and Louis L’Amour paperbacks as well. I didn’t quite realize it at the time, but these books for me were an escape from a cloister of circumstance, cultural and physical, over which I had not a jot of control. And genre novels or not, they were irrefutably forming my sense of a wider world, of possibilities out there somewhere, beyond the bubble, mysteries waiting to be solved, frontiers waiting to be explored.

Though I could and frequently did climb onto the Orient Express or trek through Mesopotamia with Dame Agatha, my first love was the mythic West and its central characters, cowboys and Indians both. On an unconscious level, I must have identified strongly with its central motif—the promise of better fortunes down the trail. If I recall correctly, my very first book report for Mrs. Callenberger was on Centennial, one of James Michener’s signature epics about the rise of a fictional frontier town. I’d seen part of the miniseries as a television re-run, and again if memory serves, bought the paperback secondhand at a flea market.

What I do remember clearly is her reaction when I heaved all thousand pages or so of this doorstop out of my backpack—surprised eyebrows, and a smile. As it turned out, my newfound public school peers were mostly reading at grade level, or in some cases smoking weed in the bathroom or the ball shed on the playground, and not reading anything at all.

For the duration of the year she pretty much left me to whatever book I had going at the time, once I finished a spelling test or busy work. Thirty years have somehow passed so I won’t claim total recall, but I know I was reading a lot of the L’Amour books then, both the formula Westerns and the longer, more consciously historical efforts, and other epic or fictionalized histories from Michener or Herman Wouk or Alan Eckert.

I remember reading The Big Sky, my first real Montana novel, but what I had yet to discover was writing with the transcendent, ineffable quality of literature, with the power not only to entertain, or to educate or instruct, but the power to reach out and grab the human heart right by the lapels with something like beauty, or like truth. Something like art.
At the time, Larry McMurtry was probably best known as the author of Terms of Endearment, the film version of which had raked in a slew of Oscars a year earlier. The original dust jacket of Lonesome Dove mentions only this other title, in three different places, and this may well be what caught Mrs. Callenberger’s eye. I don’t know if she was consciously nudging me toward an epiphany, or if the stars simply went into alignment. Whatever the inspiration, she telephoned one evening two months after I’d mustered out of her eighth-grade English class. She asked to speak to my mother.

I know she’d already bought me the book, and I know she was up front on the phone about its content. As the original jacket notes, “Lonesome Dove embraces all the West—legend and fact, heroes and outlaws, whores and ladies, Indians and settlers—in a novel that recreates the central American experience…”

Anyone familiar with the book knows it rollicks cheerfully along through swatches of hilarious dialogue and picaresque situations, but also takes hard right, matter-of-fact turns into bloodbath Comanche violence and extemporaneous frontier justice. I’m fairly sure, however, that blood-and-guts were never the sticking point, and that Mrs. Callenberger knew it full well when she called.

McMurtry had written both frankly and amusingly about sex since his earliest novels, and this one had no shortage of references to sporting girls and pokes and peckers, not to mention gang-rape, and priceless moments of dialogue such as, “A man who wouldn’t cheat for a poke, don’t want one bad enough…” To say I’d never encountered anything like it would be an understatement.

But encounter it I thankfully did, a fact that still strikes me as a bit of a miracle relative to the be-careful-little-ears environment I’d come up in. I’m not sure what Mrs. Callenberger said, but evidently she said it well. For all I know my parents were simply so shell-shocked by their own straits at that precise moment, waking up with three kids to feed and no place to live but a house in the boondocks with bare stud walls, that any distraction at all was simply not to be denied. The bubble had popped, and what existed outside was cold hard reality.

I read the novel at least twice my freshman year of high school—thirty miles away in Placerville, which translated to about two fits-and-starts hours by bus, so I didn’t lack for time. I can pinpoint Lonesome Dove as the singular book that changed my life, because it made me want to be a writer too. It was my On the Road, in a way, Gus and Call my Dean and Sal.

After that my world as a reader opened up too, for real and for keeps, first through McMurtry’s earlier novels and essay collections and then through the books and writers he mentioned or commented upon, voices such as J. Frank Dobie and Ian Frazier and Leslie Silko, and hopscotching from these to Tom McGuane and Tim Sandlin and Ken Kesey. And on, and on.

My parents finally sold the unfinished house halfway through my junior year, with virtually no progress made during the blistering hot summers and dimly lit, endless winters we lived there. We moved into a tract house much closer to town, not so unlike the one we’d left behind in New Jersey.

After high school I toted my battered old school bus first-edition around for years, from California to Arizona to Oregon, back to California and finally to Montana, its jacket disappearing somewhere along the way and the backbone coming loose, the cloth cover separating completely from the spine. Eventually, I gifted it to another woman who made a mark on my life, a woman I loved who loves books too, and who really did understand what it meant to me.

And what could I give to Marcia Callenberger, that one crucial teacher who gave a fourteen-year-old kid in not-very-great circumstances something to dream toward and work toward? Writing my first novel was a way of arriving back where I started, and knowing the place for the first time. And so I dedicated it to her.

Malcolm Brooks’s Painted Horses is out now, from Grove Atlantic.

Malcolm Brooks fiction, essays, and articles have appeared in a variety of publications including Big Sky Journal, Montana Quarterly, and Outside. His first novel is Painted Horses, out now from Grove Atlantic.

A Literary Long Weekend in Nashville 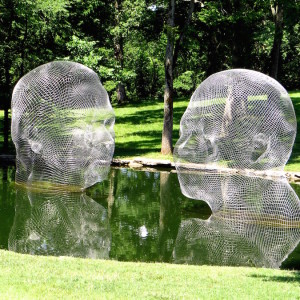 A Literary Long Weekend in Nashville