The Book of Science and Antiquities 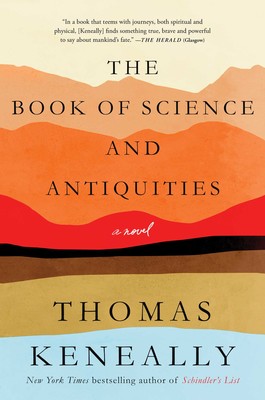 The following is an excerpt from Thomas Keneally's newest novel. Thomas Keneally began his writing career in 1964 and has published 33 novels since, most recently Crimes of the Father, Napoleon’s Last Island, Shame and the Captives, and the New York Times bestselling The Daughters of Mars. His novels include Schindler’s List, which won the Booker Prize in 1982, The Chant of Jimmie Blacksmith, Gossip from the Forest, and Confederates, all of which were shortlisted for the Booker Prize.

At the time of the  discovery of the astonishingly ancient Learned Man, some decades back, my friend Peter Jorgensen, a scientist from Melbourne, was testing dried lake basins and their sediments for records of ancient rainfall oscillations. In modern times this area is marginal country in terms of rainfall, and the Learned Lakes are dry these days. They are not lakes in the European sense, not lakes that assert their lakeness by brimming and thus accommodating the eye. However, the lakes did hold water in the day of Learned Man, and accommodated his eye.

Ironically, 20th century heavy rain had kept Jorgensen bound to the homestead of the old Lake Learned Station on that historic day of his discovery. When the rain did stop and a brightening landscape and a firmer surface presented itself, Jorgensen set off on a motorcycle to investigate the sediments of the long lunette or semicircle of sand dunes and hills that marked the former eastern shore of the lake. After he abandoned the motorcycle and trudged up the hill, he walked over layers of the past, as exposed by millennia of winds and rain.

He ascended from the 80,000-year-old sediment level to the 70,000-year-old layer and so on up to the 50,000-year-old sediments. He was now not far from where, five years earlier, he had discovered the remains of a young Homo sapiens woman he’d dubbed Learned Woman, who had until that day represented the human who had the oldest formal burial we had knowledge of. Before her flesh was burned off her bones, it had been adorned with ocher, which the sediments around the bones of the woman were full of. This ocher did not come from the lake area but from hundreds of miles away. It had been deliberately applied in reverence to her. Her remaining bones had been broken up and even partially ground for whatever cause by her people. But her skull was still intact to assert her humanity.

Dating methods were in their infancy when Learned Woman was found in the early 1970s, and she was initially thought to have lived about 30,000 years ago. However, there had been technical advances in subsequent decades: from thermoluminescence dating to electron-spin dating, uranium-thorium, carbon 14, and so on. Don’t ask me to explain any of them, or how they were applied to her. But they ultimately proved that Learned Woman had lived forty to 42 millennia ago.

The young paleontologist who worked on Learned Woman’s remains and removed them to the Australian National University in suitcases was a friend of Jorgensen’s named Harry Spurling, who became well known because of his work on Learned Woman.

At least I can tell you that everything the human brain was then, it is now.

Though of course Jorgensen had suspected there must be other ancient remains in the vicinity of Learned Woman, he was not looking for them as he strode up the slope on the day of discovery, though he was willing to register them if they presented themselves. And thus he stopped when he saw what appeared to be a white disc shining through a mantle of clay and lightly cemented sand. Looking at it more closely, he saw that it was the side of a skull uncovered by the rain. Though Jorgensen did not know the skull’s gender on first sight, it would prove to be the remains of Learned Man.

Late afternoon, and one of the ancients had chosen to resurrect himself! Even as it happened it had the flavor for my friend of a willed meeting on both sides. Indeed, Jorgensen would come to believe what a female elder of the Barkindji people later told him: “You did not find the Old Woman and the Old Man. They found you!” Another elder observed, “The Old Man knew what he was doing. He showed himself to a man of science.”

I was already a documentary filmmaker of what could be called either note or notoriety when I met and became an admirer of Peter Jorgensen. I visited Lake Learned one year on a road trip  and was captured by the vast dry lake of semidesert lushness and encountered the tale of Learned Man and the man who had found him. Jorgensen explained he was a geomorphologist when I first contacted him. That is, he was a researcher of what the earth looked like once, in ice ages past, and of how the rain fell on it, the ice shaped it, and long-gone waters occupied and honed it. Now, these are very technical issues and ones that stand aside from the question of humans and human action. We weren’t numerous then, and our species trod lightly upon the earth. We lacked the power and ambition to weigh upon it heavily. So the earth was still supreme when the rains Jorgensen was interested in fell. And Jorgensen, grandson of a Norwegian mariner who came ashore in Melbourne long ago for the sake of an Irishwoman, was a student of the supreme earth as it then existed, within its carapace of atmospheres and its veins of current and wind.

I felt too, for reasons that will become apparent, that in trying to make my film on Learned Man, I might lead Jorgensen to think me a chancer. I’d been depicted in that way because of the controversy over a documentary I’d made with my late friend Andy Mortray. That had made me edgy enough to suspect I was mistrusted, which is why I was reluctant to ask my new acquaintance Jorgensen straight out, from the first hour of our filming at Lake Learned, whether it was all a matter of technical concepts for him; all a matter of the rainfall of, say, 43,757 Before the Present Era, and whether Learned Man was only of technical interest to him?

In order not to offend him, I first asked him the question off camera.

“Oh,” he told me, “I’m a familiar of Learned. No question. There are three men I dream of, Shelby. They visit me when I’m asleep.” The great scholar swallowed. “One is my drowned brother, Herk. He was strong, but sometimes I get nervous that he died to bequeath his strength to me.

“The other is my father, whose life was marred by a wound he suffered at Pozières on the Somme.”

Already the geomorphologist had confessed to a greater human sensibility than I had expected.

“The third,” he said, “is of course Learned himself.”

“So what does Learned Man tell you?” I asked glibly.

“Well, he says that to be human is to have business to attend to, to be on a quest. He was honored, you see, by those who buried him, as if he had been on a quest on their behalf. His people recognized what he’d tried to do, whatever it was. He says to me that we say we want an easy life, but without a pilgrimage, a dangerous search, we don’t live a life worth having. He tells me something a bit creepier too. He definitely says to me that being human is a test that kills us.”

“That’s a rather despairing idea,” I said, with the cinematographer’s everyday piety.

At this Peter Jorgensen smiled and said, “I don’t believe my friend Mr. Learned failed his test. He was buried like a hero, the first burial of a hero we have. But he tells me that not only do we face tests but there’s something in us that welcomes them. That’s the way we were in the time of Learned Man, and it’s the way we are now. At least I can tell you that everything the human brain was then, it is now. If you and I are poets and questioners, he was too. He prodded at the universe the way we prod at it. He felt overwhelmed by it, but had the human urge to encompass it. He chased love with the same sacred and profane mix of motives we do. At the end of it, he was you, Shelby.”

And so Learned Man was, according to Jorgensen, not a phantasm on the edge of the imagination, or a tepid taint of humanity over ancient terrestrial facts, but a personage of the present.

I was delighted to hear all this.

Then Jorgensen lowered his voice. “On top of that, Shelby, there is a white hyalite stone amongst Learned Man’s bones. What was it doing there? Maybe an emblem of authority. The stone comes from hundreds of miles away and is particular to Lightning Ridge up near the Queensland border.”

This was when I got the paleontology bug and began to make the first of my documentaries about Jorgensen, Learned Man and Woman, and the lakes region.

Learned Man stayed with me too, from the day I encountered him through Jorgensen, and in the end stayed with me longer  than most things. He straddled time, and was the guessed-at past in an undiscovered future; the reconciling phenomenon between Australia’s geological antiquity and its societal juvenility. He hung suspended between the layers of our contradictions: Lake Learned had brimmed with water at the time Learned Man was there; it was his mare nostrum, his Mediterranean, his ministry, his dream, and his kindly shore. What must it have been to be human then, when to be human was so marginal an experience, a world in which we were not yet the dominating force but had mere elbow room amongst a wealth of other species? 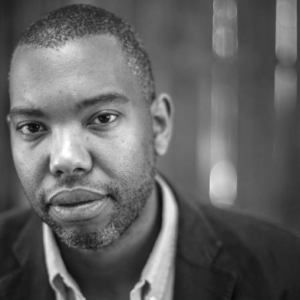 Ta-Nehisi Coates on the Intimate Evil of Enslavement How does memory create power? How do you define freedom, and how does the emotional savagery of selling and separating members...
© LitHub
Back to top