The Book of Anna 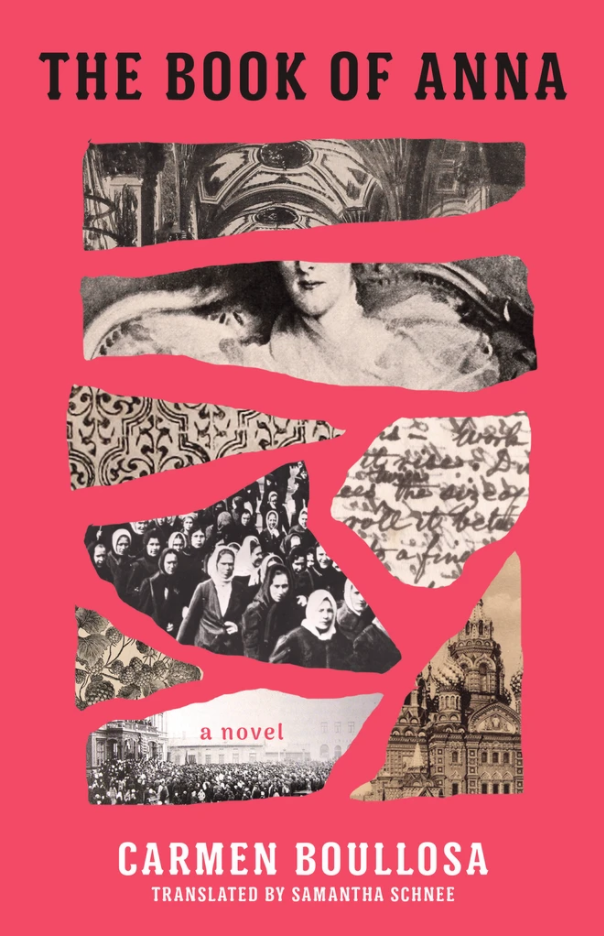 The following is a story from Carmen Boullosa's The Book of Anna, translated by Samantha Schnee. Boullosa—a Cullman Center, a Guggenheim, a Deutscher Akademischer Austauschdienst, and a Fondo Nacional para la Cultura y las Artes Fellow—was born in Mexico City in 1954. A poet, playwright, essayist, novelist, and artist, more than a dozen books and over ninety dissertations have been written about her work.

Sergei has seen Mikhailov’s portrait of Anna Karenina only once. The lighting wasn’t ideal. Sergei was still a boy, despite everyone insisting he was already a man. He was on the way home from school. The Countess Vronskaya sent the portrait at the precise hour she thought Sergei would arrive. She had planned this carefully; it was her revenge against the son of the woman who had ruined her own.

The portrait was borne by one of the countess’s servants— dressed impeccably in French livery—followed by two others, not quite so well dressed (although she was rich, the Countess Vronskaya counted every ruble, her servants lived with their bellies half-empty, and creditors had to call on her three or four times before she would part with a single kopeck). Rich but stingy, she squandered her wealth on fri-volities. Such as? A feather from the farthest corner of the universe to replace the one on a hat she despised; Turkish delight from smugglers, which she shared with no one; fine Belgian lace miniatures she caressed with her fingertips before putting them away in drawers to keep them from being ruined; or French bonbons.

The footman in elegant French livery held the portrait of Anna Karenina by its gold-leaf frame, perhaps an excessive impulse of Vronsky’s that, to a finer eye, didn’t complement the delicate color of Anna’s dress. Iridescent feathers for the mother, gaudy gold leaf for the son.

The second servant—in his thick felt shoes, his coarse clothes—carried a woman’s dress in his arms, the only one of Anna’s  that the countess had kept (the rest, as previously mentioned, had been donated to a charity next to Olga’s Poorhouse, which helped fallen women, because it pleased the countess  to think about hoozies wearing them). fe third footman—his socks so threadbare it would set your teeth on edge—carried in his right hand the blue box in which Anna had stored her manuscript, and over his left shoulder, a huge, green cloth sack, which contained her collected correspondence and calling cards.

They also delivered a letter from the Countess Vronskaya, a curt, sloppy note to the widower Karenin, saying she would keep Anna Karenina’s jewels for Anya, both the ones he had given her himself and the ones from her son. Karenin understood that these lies were intended only to wound him.

Te arrival of the portrait and its entourage at the Karenin Palace had the effect the countess desired, but not in the way she had imagined. Sergei was on his way home. He was returning from school, his eyes glued to the ground. In the morning, walking in the opposite direction, he had almost stepped on a sparrow recently hatched from its shell, its bony body half covered in bluish down, still breathing. The sight frightened and disgusted him. This creature, grayish like a piece of the sky, its beak soft as cartilage, its feet disfigured, looked more like an insect or entrails than a bird. Sergei was afraid of seeing the sparrow again, terrified of stepping on it. That’s why he was scouring the ground anxiously, searching but hoping not to find the little bird. His eyes darted from the ground to his waist and back, a somber zigzag. He looked up when he heard Kapitonich’s voice say, “Heavens!”

It was the third time in a row that Kapitonich had uttered these two syllables. Sergei, absorbed in his search for the harmless creature, staring at the ground, submerging all his worries in this search, anxious but relieved of his other anxieties, didn’t hear him.

The servant was walking like that because of the awkwardness of carrying the portrait and his moral burden, aware of the countess’s wicked intentions to hurt the boy.

He was about to be sent away to boarding school. He was afraid; he didn’t want to go, but he had to, he knew there was no alternative; three nights ago he had wet the bed, which he had never done before, not even when he was really little. Inside him a storm raged, one he couldn’t describe to anyone, not even himself.

And now, on top of that, the unflappable Kapitonich had uttered a worried “Heavens!” like another sparrow falling from its nest, half-formed. Sergei looked up. If it hadn’t been for Kapitonich, the Countess Vronskaya’s servants would have entered the house without Sergei setting eyes on them. But the countess’s plans came to fruition, thanks to Kapitonich’s unwitting aid. That’s how Sergei came face-to-face with this perfect image of Anna Karenina, looking more like herself than she did in real life, her face uncovered, her lovely neck and shoulders partially bared by her Italian dress, her thick, curly, black hair, her eyes, her magnificent mouth expressing intelligence, honesty, passion, her skin like old marble, a color unknown in those climes.

The portrait, the woman, walked along without touching the ground; she didn’t float through the air, because from her waist to the ground, she appeared to wear a pair of trousers belonging to the dark suit of the man who was carrying her. She looked like a huge woman with a short pair of man’s legs. Immobile from the waist up, her legs took nervous steps. The servant was walking like that because of the awkwardness of carrying the portrait and his moral burden, aware of the countess’s wicked intentions to hurt the boy.

Once upon a time, Sergei had played a game pretending to be one person with Marietta (his nanny). They used men’s clothes: a shirt that buttoned from the waist to the neck and a pair of shoes. Sergei wore the shirt back to front, the opening at his back, but he didn’t put his arms in the sleeves; he put his hands in the shoes and used them to lean on a chair.

Marietta hid behind Sergei and put her arms through the shirt. She’d move her arms and he’d move his “feet,” talking and singing. It was hilarious because of the disproportions: Sergei

looked like some kind of strange dwarf. Anna split her sides laughing—that’s another thing Tolstoy forgot: Karenina loved to laugh.

The creature formed by the framed painting and its bearer appeared to parody the game Sergei played with Marietta, except that it didn’t look like a dwarf: it was his mother from the waist up, larger than life, wearing a pair of tiny trousers. It was grotesque, causing Kapitonich to utter “heavens” and plunging Sergei into pain and horror.

The boy who was ashamed to miss his mother—who nursed the secret of his grief in private, who struggled with both the reality that she was dead and that death would come for him, too, especially if

she came for him—was confronted by her in the light of day at the front door of his house. She appeared, her very self (apart from someone else’s legs), the dead become death.

The footman who was carrying her slowed to a stop outside the Karenin Palace and put the portrait down on its side. Anna, floating above the street, as if she were lying down in the boy’s bed to help him go to sleep after reading him a bedtime story. Anna, face-to-face with her son, in broad daylight.

This  vision, as Vronskaya had crassly predicted, pierced Sergei’s heart like a poisoned dart. It literally made him sick: he developed a fever much like the one he’d had seventeen months earlier, when Anna had come to visit for his birthday.

On that occasion, when Anna Karenina surprised him, Sergei hadn’t been afraid at all; even if they had told him his mother was dead, he wouldn’t have believed them; he could feel it, he knew it, he was certain that “death doesn’t exist.” That day, his birthday, she was there when he awoke, sitting on the edge of his bed, alive, whole, gazing at him, loving him.

But when her portrait appeared, even if they had tried to hide the fact that she was no longer alive, he would have felt that she was dead, he knew it. In the light of day, against all logic, she had appeared. Luminous, the most beautiful, most perfect—most feared and most desired—of all ghosts, there in front of him, in the street, about to enter his house. . . .

Rescued from obscurity in 1905, Mikhailov’s portrait of Anna is neither the reappearance of a ghost nor the incarnation of death. Claudia looks at it while the servants dust it off and hang it where a landscape used to hang on a wall in Sergei’s office: she’s no expert, but to her it looks like the canvas is the masterwork of some fictional painter. 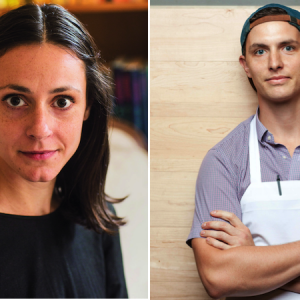 Tables of Contents Live:
Make Chicken Broth With Miranda Popkey! Here’s how it works: Make yourself a simple chicken broth. (We’ve got a recipe here for you, below.) Recorded live on Instagram...
© LitHub
Back to top