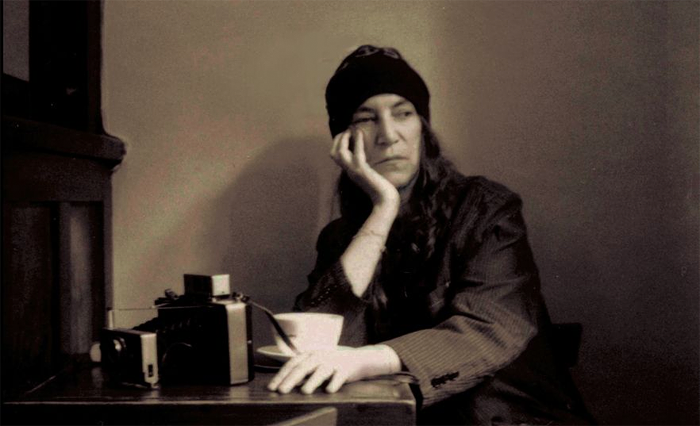 Every other week Oscar Van Gelderen summarizes a notable work of (non)fiction in ten quotes, with an emphasis on style and voice. No spoilers. This week: M Train by Patti Smith (published by Knopf, 2015).

It’s not easy to write about nothing. (3)

Some months before our first wedding anniversary Fred told me that if I promised to give him a child he would first take me anywhere in in the world. Without hesitation I chose Saint-Laurent-du-Maroni, a border town in northwest French Guiana, on the North Atlantic coast of South America. I had long wished to see the remains of the French penal colony where hard-core criminals were once shipped before being transferred to Devil’s Island. In The Thief’s Journal Jean Genet had written of Saint-Laurent as hallowed ground and of the inmates incarcerated there with devotional empathy. In his Journal he wrote of a hierarchy of inviolable criminality, a manly saintliness that flowered at its crown in the terrible reaches of French Guiana. He had ascended the ladder toward them: reform school, petty thief, and three-time loser; but as he was sentenced the prison he’d held in such reverence was closed, deemed inhumane, and the last living inmates were returned to France. Genet served his time in Fresnes prison, bitterly lamenting that he would never attain the grandeur that he aspired to. Devastated, he wrote: I am shorn of my infamy. (10/11)

An unwinding pool of obscure angles, a glass of tea, an opened journal, and a round metal table balanced with an empty matchbook. Cafés. Le Rouquet in Paris, Café Josephinum in Vienna, Bluebird Coffeeshop in Amsterdam, Ice Café in Sydney, Café Aquí in Tucson, Wow Café at Point Loma, Caffe Trieste in North Beach, Caffè del Professore in Naples, Café Uroxen in Uppsala, Lula Cafe in Logan Square, Lion Cafe in Shibuya, and Café Zoo in the Berlin train station.

As I unearth After Nature by W.G. Sebald it occurs to me that the image of the boy in white is on the cover of his Austerlitz. Uniquely haunting, it drew me to the book and thus introduced me to Sebald. Mystery solved, I abandon my search and eagerly open After Nature. At one time the three lengthy poems in this slim volume had such profound effect on me that I could hardly bear to read them. Scarcely would I enter their world before I’d be transported to a myriad of other worlds. Evidences of such transports are crammed onto the endpapers as well as a declaration I once had the hubris to scrawl in a margin – I may not know what is in your mind, but I know how your mind works. (66)

A letter arrived. It was from the director of Casa Azul, home and resting place of Frida Kahlo, requesting I give a talk centering on the artist’s revolutionary life and work. In return I would be granted permission to photograph her belongings, the talismans of her life. Time to travel, to acquiesce to fate. For although I craved solitude, I decided I could not pass on an opportunity to speak in the same garden that I had longed to enter as a young girl. I would enter the house inhabited by Frida and Diego Rivera, and walk through rooms I had only seen in books. I would be back in Mexico. (110/111)

I got a message from Zak. His beach café was open. All the free coffee I wanted. I was happy for him but hesitated to go anywhere, as it was Memorial Day weekend. The city was deserted, just the way I like it, and there was a new episode of The Killing on Sunday. I decided to visit Zak’s café on Monday and spend the weekend in the city with Detectives Linden and Holder. My room was in a state of complete disarray and I was more unkempt than usual, ready to be comrade to their mute misery, swilling cold coffee in a battered car during a bleak stakeout coming out equally cold. I filled my thermos at the Korean deli, deposited it next to my bed for later, chose a book, and walked over to Bedford Street. (127)

Café Ino looked empty. There were tiny ice formations dripping along the edge of the orange awning. I sat at my table, had my brown toast with olive oil, and opened Camus’s The First Man. I had read it some time ago but was so completely immersed that I retained nothing. This has been an intermittent, lifelong enigma. Through early adolescence I sat and read for hours in a small grove of weed trees near the railroad track in Germantown. Like Gumby I would enter a book wholeheartedly and sometimes venture so deeply it was as if I were living within it. I finished many books in such a manner there, closing the covers ecstatically yet having no memory of the content by the time I returned home. (168)

Another restless night. I got up at dawn and worked, my eyes burned from deciphering scribbled envelopes, endpapers, and stained napkins, then transcribing the text to the computer with everything out of order, then trying to make sense of a subjective narrative with an asymmetrical timeline. I left the lot of it on my bed and went to Caffè Dante. I let my coffee run cold and thought about detectives. Partners depend on one another’s eyes. The one sats, tell me what you see. His partner must speak assuredly, not leaving anything out. But a writer has no partner. He has to step back and ask himself – tell me what you see. But since he is telling himself he doesn’t have to be perfectly clear, because something inside holds any given missing part – the unclear or partially articulated. I wondered if I would have been a good detective. It kills me to say it, but I don’t think so. I’m not the observant type. My eyes seem to roll within. (211)

I went into the back room but the coffeemaker, beans, wooden spoons, and earthenware mugs were all gone. Even the empty mescal bottles were gone. There were no ashtrays and no sign of my philosophic cowpoke. I sensed he had been heading this way and most likely, spotting the spanking-new paint job, just kept on going. I looked around. Nothing to hold me here, either, not even the dried carcass of a dead bee. I figured if I hustled I might spot the clouds of dust left behind where his old Ford flatbed passed. Maybe I could catch up with him and hitch myself a ride. We could travel the desert together, no agent required. 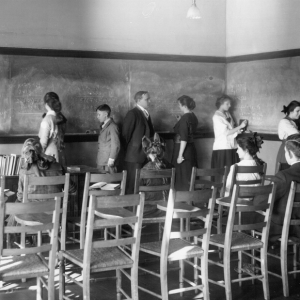 For the next five days Literary Hub will help in counting down the days until the seventh-annual Irish Arts Center PoetryFest...
© LitHub
Back to top