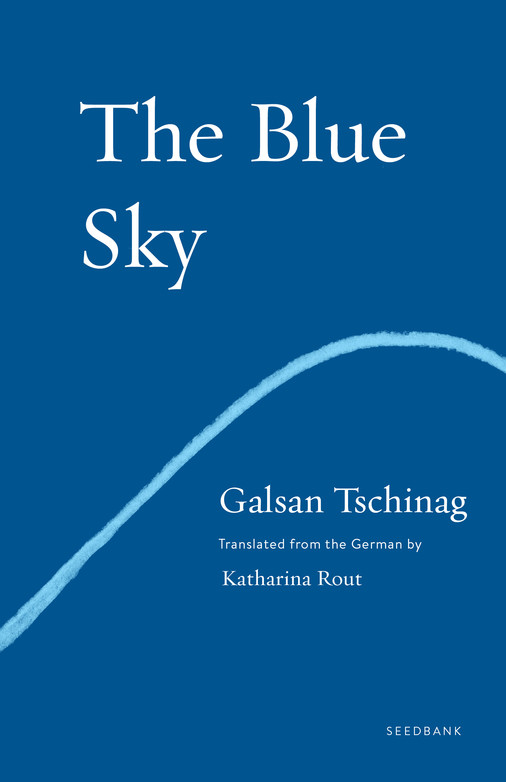 The following is excerpted from The Blue Sky, written by Galsan Tschinag and translated by Katharina Rout. Rooted in the oral traditions of the Tuvan people and their epics, the first novel in Galsan Tschinag’s saga, The Blue Sky weaves the timeless story of a boy poised on the cusp of manhood with the tale of a people’s vanishing way of life. Tschinag was born in Mongolia, and is the author of more than thirty books.

Every morning my dog Arsylang welcomed me when I stepped out into the world. Compared to me, the world was incomparably awesome as it lay in front of me in all its mystery. And every evening it was Arsylang, again, who brought me back safely from the world of mysteries and dangers to the shelter of my parents’ yurt. In the mornings, we had to hurry ahead of the flock, and in the evenings, follow behind. That was the number one rule for anybody who was willing to take upon himself the dangers lying in wait for his flock. But Arsylang always watched out for me: In the mornings, he ran out ahead of me and in the evenings, he trailed along behind me.

During the day, he crouched next to me and watched me play. I wanted him to join in, but smart as he was, he did not grasp that the sheep and goats had to be kept apart from the yaks and horses, or that the yurt had to be round and the stove at its center. From time to time I chided him, sometimes even shoved his neck, but then consoled him when I thought I detected in his  greenish-brown  eyes  something  like traces of guilt and of helpless sadness. Then I would stop playing the solitary game and play other games with him, games that he, too, was able to play: We skipped and ran, wrestled and rolled around in the snow. I was always the first to get tired and when I did, we would give up on that game as well and instead busy ourselves with the flock. Arsylang was quick, was sharpness itself, and skilled in guiding the flock. Sometimes he would punish a kid that had climbed on rocks or got up to some other silliness instead of eating its fill. His punishments varied. At best, the offender was given a little fright. At worst, he would chase an animal until it collapsed. But he inflicted the harsh punishment only when I  wanted him to, and I swear that Arsylang’s teeth never broke the skin of any animal in the flock.

On windless Sundays we hiked up to the top of Doora Hara. From there everything was visible as if in the palm of my hand: The big rivers that were now covered with ice and snow and were glinting in places; the ails along the bank on this side of the Ak-Hem; Tewe-Mojun, the Camel’s Neck, and Saryg-Höl, the Yellow Lake, both brought into being by Sardakpan, the giant hero and creator of the Altai Mountains; the six Kazakh yurts that lay in regular intervals along the Homdu’s left bank and almost always gave off clouds of thick smoke; beyond Ak-Hem and on the Homdu’s right bank the center of the Ak-Hem sum, which was  Kazakh; the bushes starting at Dshedi-Geshig and stretching along the Homdu until they disappeared in the  ravine  between  the mountain ridges of Ortaa-Syn and Borgasun; the center of Tsengel sum, which was Tuvan; and finally the mountains in the distance, above all Harlyg Haarakan, the vast blue-white, snow-covered peak.

I had been to fewer than half of these places, but I knew all of them by name, and I knew pretty much where things were and who lived where. I knew because Grandma had a good memory and, unlike Mother, the patience to answer all my questions.

The sum, which always meant the center of the Tuvan sum, was closest to my heart. I stared at it more often and longer than at anything else, until I was able to distinguish one house from the next and thought I could even count the yurts scattered around the houses like a shooed herd. They stood out against the brown steppe, shimmering from afar. Sometimes I saw a car drive past. It dragged along a white thread of dust, which would often grow into a cloud. At other times the thread would break off and balloon into a veil of fog that grew bigger and paler until I could no longer see it.

Uncomprehending, but curious, I watched and drew Arsylang’s attention to what went on beyond the two rivers and the steppe. He would stare across, prick up his ears, and growl at moving cars. And naturally, as we kept watching, I thought of Brother and Sister and discussed them with my four-legged companion. Whenever he heard their names, Arsylang became restless and whimpered. But if his whimper began to turn into  a howl, I jumped in to interrupt and tell him that howling   and crying might harm Brother and Sister and thus were not allowed. Then Arsylang obeyed, fell silent, and looked at me with his submissive, pleading eyes. Once, though, I did not interrupt his whimpering—I was unable because I had burst into tears myself. Arsylang immediately joined in with his muffled howling, which in turn only made me cry harder with streams of tears and noisy sobbing. And as happened so often  in those days, I could not help but think about why Brother and Sister had to leave home, and for the first time ever I felt hurt by Father, who had wanted it all to be this way.

Once, though, I did not interrupt his whimpering—I was unable because I had burst into tears myself.

Father idolized his own father, who had been a baj and in some people’s eyes even a kulak. However, Father called him something different when he wanted to call him anything besides “Father”: a man with a heart for his animals. That name applied to Father himself as well.

What may have moved Father, a man with a heart for his animals, to separate his children from his animals, from the proven roots and sustenance of their lives, just when they had turned old enough to take on some of his tasks and to ease his burden? Was it the salary? People  talked about the salary as if it were a little fairy-tale pot that cooked porridge whenever you asked. Or was it rather obedience to the powers-that-be, which supposedly represented the people and certainly were strict? Or perhaps a kind of trust in those powers? Or was it the perceptiveness of the arate, that natural ally of the victorious working class, a class which couldn’t possibly have existed from the start? I felt guilty after I had cried and I still felt guilty when I woke up the next morning. I had had a dream, and although I could not remember the details, I sensed it had been about Brother and Sister, and I felt something heavy inside me. And then Arsylang, too, seemed to go quiet and move with heaviness. Maybe my mood was indeed affecting him?

A few days went by before word arrived that flu had broken out in the sum. Father and Mother turned mute with fear. Their prayers, those conversations with oneself that were addressed to the mountains, the waters, and the clouds, became longer and more fervent by the day, and whereas at other times they might have taken place out of habit, as a kind of duty, they now arose from a heartfelt need. Re-awoken, my guilty conscience did not pass but gnawed at me and made my wound spread further with each passing day.

I begged the mountains, the steppe, and the sky to protect Brother and Sister from vicious and rabid dogs, from illness, and from black or white tongues. That such dangers existed I learned from the grownups as I listened to their prayers. But there were some additional pleas that I had not heard from anybody but that I came up with myself. For example, I asked of Eser-Haja, the mountain saddle, that Brother and Sister not only return happy and healthy, but also with candies. And I pleaded with the ravine below our camp and with the river  that snaked through it and was now frozen stiff and seemed to be resting, to protect me from school and to let me live with Grandma and our shared flock. Because I saw that the sides of the ravine were steeper than any other I had ever seen, and because I knew that its river gathered the waters of all other rivers, I did not doubt their omnipotence.

My wishes were insatiable, my pleas unbridled. Arsylang crouched next to me and listened patiently—full of understanding, I thought—when, my arms stretched out and my head held high,  I adopted the pose of an epic hero and with my high voice loudly recited my pleas.

Behind the Mic: On The Shadow King by Maaza Mengiste, Read by Robin Miles 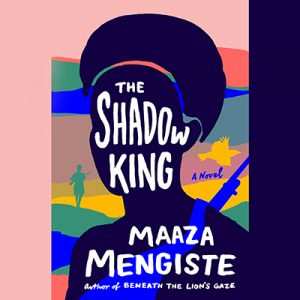 Behind the Mic: On The Shadow King by Maaza Mengiste, Read by Robin Miles Every Monday through Friday, AudioFile’s editors recommend the best in audiobook listening. We keep our daily episodes...
© LitHub
Back to top