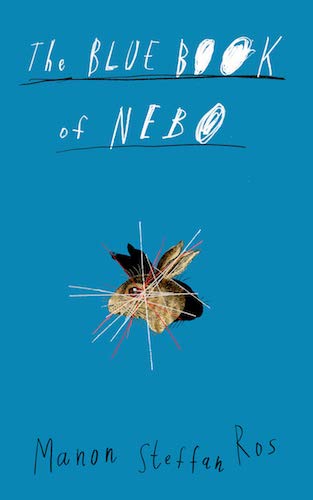 The follow is excerpted from Manon Steffan Ros's The Blue Book of Nebo. Her first novel for adults Fel Aderyn, reached the shortlist for Wales Book of the Year and her novel Blasu won the Fiction Prize of the 2013 Wales Book of the Year. Ros has also found great acclaim in her children's writing, and has won the prestigious Tir Na N-Og prize for Welsh children's literature four times. The Blue Book of Nebo won the Prose Medal at the 2018 Eisteddfod. She lives in Tywyn, Meirionnydd with her sons.

I have to write down who her father was, and I’m not sure why. Maybe because that will make her more real, this little girl whose existence was never registered, the girl who never went to a park or a school. My daughter, whose face was never captured on an iPhone camera. Mona Greta, my little baby girl.

It was a rainy day in February, and some snow was clinging to the sheltered corners of the fields. Around two years had gone by since The End, and almost that long since Dylan and I had seen another human being. Mr and Mrs Thorpe felt like a long-ago dream. Everything before that—work and school and Gaynor— felt like they belonged to someone else’s life.

As usual, Dylan began his day by filling the bath with water from the stream. He had started planning a system which used an old pipe to pump water into the house, but he hadn’t done it yet. He’d carry bucketfuls of water into the house every morning. He was not an eight-year-old child in his mind. He was a worker.

That morning, I decided to walk the mile or so down to the main road with Mr Thorpe’s tools in my backpack. Dylan and I were building a huge dark box to grow mushrooms, and we needed a large, flat lid. I thought that one of the road signs would be perfect— one of those that showed the drivers that there was six miles to Caernarfon, or twelve miles to Bangor. If they were too big, a speed limit sign would do, or a P for parking.

No traffic had been on this road for years. Everyone else in the world was dead. So I stepped out onto the A487 that, years ago, had been a constant hum of cars and lorries. By now, moss and grass and weeds had grown over the tar.

I had started to pull down the sign which read

from its pole. I sweated as I hit the metal with a heavy mallet, and I swore loudly, but I was enjoying it too, because I knew that I’d succeed.

And from the corner of my eye, I saw the slightest movement.

A man was cycling towards me down the A487. I swore, of course, and raised the mallet above my head, ready to strike. The man leaped off his bike when he saw me, and we both stood still, staring at one another.

If I’d had the gun, he wouldn’t have lived to utter a single word.

Long, tangled hair, a beard hiding half of his face. His body too thin, his jeans too short, and a dirty white T-shirt. Huge brown eyes, calf eyes, childlike eyes.

“Go away!” I snarled, almost scaring myself by the roughness of my voice. I sounded like an animal.

Jesus Christ raised his hands, showed his palms, as if I was pointing a gun at me.

“Where did you come from?” I asked, the mallet still above my head.

“I thought I was the only one left!” he said. “I live by Porthmadog. In the middle of nowhere. I don’t know whose house it is, but they’ve gone.” He looked up at the mallet in my hands, and he said, “Please. I’m not going to hurt you. I’m just so happy to see another person.”

After a few seconds, I lowered the mallet. Jesus Christ smiled.

“Are there people in Porthmadog?” I asked, and the man shook his head. “I think there’s a man somewhere around Penrhyn, I think, because I’ve seen smoke. But Porthmadog itself is dead.” He shook his head, as though the fact was still a shock to him. “How about you?”

“Up there.” I nodded towards home.

“The girl under the mast,” he smiled, as though he didn’t know that the pretty lights on Nebo mast had stopped working years ago.

The man grinned. He was handsome, I think, although such an idea felt redundant after The End. “A boy! How old?”

He was called Gwion. We sat in the middle of the A487 for a while, facing one another over the faded white line, a soft drizzle slowly soaking us. He didn’t know any more than I did about what had happened, or what was happening, or what would happen next. He only knew that gangs of people had been fighting at the very beginning of this, battling over food and fuel and medicine. By now, they had either killed each other or moved away to somewhere else. Perhaps, Gwion said, life was normal in Cardiff or London. The fact that society had fallen here didn’t mean it had everywhere. All the people had gone somewhere—they couldn’t all have died.

“Do you really believe that?” I asked.

Gwion shrugged. “I don’t know. I can’t decide what to believe, nor what to hope for. Does humanity just start again now? Or are we waiting to be saved?”

I had longed for these kinds of conversations, without even knowing it. Of course, Dylan was good company, and could speak to me as an adult now, almost. But he barely remembered life before The End. None of it was real to him.

I stood up after a while. “I’d better get on with this.” Gwion nodded, and without discussing it, came over to the road sign with me in order to help. Before long, the sign was down, and was ready to be dragged home as a lid for the mushroom box.

Gwion reached into his backpack. I took a step back, my instincts telling me to be careful.

Gwion stared at me, and was still for a while before he said, “I’m not going to hurt you. You shouldn’t lose faith in people like that.”

And he reached into his bag and pulled out a bar of dark chocolate.

“A month past its sell-by date, I think—I’m not exactly sure what date it its.” He handed it to me. “For your boy.”

I didn’t know what to tell him. “I haven’t got anything to give you.”

“I don’t want anything. I find nice things sometimes. It makes me happy to think that a little boy will be getting a bar of chocolate.”

Gwion was a thief, going from empty house to empty house looking for food and clothes and plants for the garden of his stolen house. He’d been into hundreds of homes, he said, but I was the first person that he saw.

“Well, alive, anyway,” he added then as I slipped the chocolate back into the back pocket of my jeans. “I think the cloud killed most of them.”

I hadn’t thought about the cloud for a while, though I’d always known that Dylan and I would not have survived if it wasn’t for the water I’d forced down our throats when we were ill. I wouldn’t have had the energy to reach the stream when I was at my weakest. We would have died of dehydration.

“Thanks for…” Gwion started, and took a few seconds to think about what he wanted to thank me for. “I thought everyone was gone. I didn’t think I’d ever hear another person’s voice.”

And even though I was hardened and cold and suspicious, I couldn’t help but smile at Gwion. Jesus Christ on the A487.

He must have worked out which house was ours, because of the polytunnels and the new plants and, of course, he would have noticed the smoke curling in ribbons from the chimney when it was cold. Every couple of months, I’d find a gift on the doorstep—a box of sugar lumps, or a pot of Asda Italian Mixed Herbs, or, on one fine and wonderful day, a bar of old-fashioned soap, the orange type that smells like the past.

One night, almost a year after we met on the A487, I was drawing the curtains before going to bed when I saw him there, standing behind the garden wall, his bag on his back. I immediately flew into a panic—what if Dylan woke up and saw him? Dylan knew nothing about Gwion! And yet, I couldn’t deny the wave of joy that I felt when I saw him there. The kind of joy that had been missing since The End, the jolting kind, a lovely surprise.

“You can’t come in,” were my first words to him. “I don’t want Dylan to see you.” He was wearing a shirt this time, a blue shirt with small, pearlescent buttons. It was starting to get dark, and the end of the day complemented him perfectly. He looked lovely.

I don’t know why I lied to him about my name when we first met. Maybe everything felt too personal in this new world, and my name felt like the only thing that belonged exclusively to me. Dylan called me Mam. No one said Rowenna anymore.

He’d come to me every three months or so, bringing a gift each time, and sometimes with a nugget of information too. He’d seen a dead whale on the beach in Morfa Bychan, and a family of deer in the midst of the weeds in the car park by Tesco in Porthmadog. And then one day, “I’ve checked the houses in Nebo for you. There’s no one in them. Just don’t go into the bedrooms whose doors are shut because, you know. The cloud.”

“Why are you telling me that?”

“Look. I know you don’t like the thought of stealing, but I’m sure these people would want you to have their stuff.”

The moral argument was already formed on my tongue, but I knew he was telling the truth. The village of Nebo was only half a mile away, and I knew that there would be clean blankets for me and Dylan, saucepans and dishes, perfect slates to fix our roof with. I’d been sleeping without a mattress for almost three years, and the thought of the luxury of being clean and dry was almost too much to bear.

“Thanks,” I replied, knowing that this was the next huge small change in our lives—breaking and entering, theft, surviving on the crumbs of other people’s lives. No, not surviving—we were already surviving. But I wanted more. Just a bit more.

“Are there books?” I asked.

And that is what we did.

A Close Reading of the QAnon Shaman’s Conspiracy Manifesto

Lincoln’s Dictatorship: How the President Broke the Constitutional Compact in Order to Save It 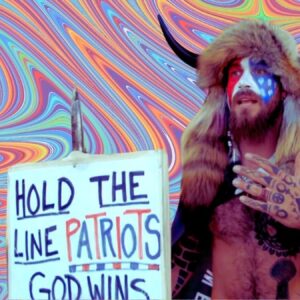 A Close Reading of the QAnon Shaman’s Conspiracy Manifesto The “QAnon shaman”—Jacob Chansley, the tattooed dude having an Excellent Adventure in Mike Pence’s Senate chair on January...
© LitHub
Back to top