What to Read to Celebrate the Great Writer, Explorer and Eater

Anthony Bourdain, the larger-than-life chef, bestselling writer, and traveling television host, died last week at the age of 61 in an apparent suicide. Since then, remembrances, tributes, and messages of love and sadness have poured out from friends, fans, and even President Obama, who, it appears, was both. In the wake of this loss, here are a few suggestions of what to read, including some of the best pieces ever written about Bourdain, and one (yes, that one) by the man himself.

The best piece to be written about Bourdain in the immediate aftermath of his death:

“Anthony Bourdain and the Power of Telling the Truth,” Helen Rosner in The New Yorker

The last time I saw Bourdain was a few months ago, at a party in New York, for one of the books released by his imprint at the publishing house Ecco—of his many projects, his late-career role as a media rainmaker was one he assumed with an almost boyish delight. At the bar, where I’d just picked up my drink, he came up and clapped me on the shoulder. “Remember when you asked me if I was a feminist, and I was afraid to say yes?” he said, in that growling, companionable voice. “Write this down: I’m a fuckin’ feminist.”

“Don’t Eat Before Reading This,” Anthony Bourdain in The New Yorker

Gastronomy is the science of pain. Professional cooks belong to a secret society whose ancient rituals derive from the principles of stoicism in the face of humiliation, injury, fatigue, and the threat of illness. The members of a tight, well-greased kitchen staff are a lot like a submarine crew. Confined for most of their waking hours in hot, airless spaces, and ruled by despotic leaders, they often acquire the characteristics of the poor saps who were press-ganged into the royal navies of Napoleonic times—superstition, a contempt for outsiders, and a loyalty to no flag but their own.

Bourdain is comfortable being seen as a purveyor of escapism; he is less comfortable with the responsibility that attends the show’s more serious material. In an episode set in Laos, he ate freshwater fish and bamboo shoots with a man who had lost an arm and a leg when a U.S. explosive, left over from the war, detonated. In Hanoi, one of Obama’s staffers told him that, until the episode aired, some people in the White House had been unaware of the extent of the unexploded-ordnance problem in Laos. “Very casually, he said, ‘So I guess you do some good after all,’ ” Bourdain recalled. “I’m a little embarrassed. I feel like Bono. I don’t want to be that guy. The show is always about me. I would be bullshitting you if I said I was on some mission. I’m not.”

Nevertheless, Bourdain knows that most viewers who caught his Congo episode had read little about the conflicts there. I was reminded of how Jon Stewart, whenever someone observed that many young people got their news from “The Daily Show,” protested, unpersuasively, that he was just a comedian cracking jokes. Bourdain’s publisher, Dan Halpern, said, “Whether he likes it or not, he’s become a statesman.”

“Anthony Bourdain, the Distinguished Motherfucker of Food, is 60,” John Birdsall in First We Feast

Getting Bourdain to acknowledge that he broke the code on rendering the chef as a complex being is like trying to turn a doorknob using a hand slicked with Astroglide: It doesn’t happen with the ease or the grace you’d expect. It makes me think of something Lucky Peach editor Peter Meehan told me about Bourdain, about how thinking of himself as an outsider fuels Bourdain. “He feels fortunate to be there and tries to do the good work to keep his place at the table,” Meehan said, “and that sets him apart. There is a moment in most people’s careers that’s like, ‘I belong here.’ I’ve never gotten that from Tony.”

We are a violent nation, from the beginning. I’m not arguing for current gun policy, but I think it’s worth acknowledging that this is a country founded in violence, a country that has always worshipped outlaws, loners, cowboys, and people who got the things they got by the gun. We glorify it, we created an entertainment industry that does little but glorify solving complex problems with simple violence.

But I think to mock constantly, as so much of the left has done—to demonize, to ridicule, to treat with abject contempt people who live in a very different America than they live in—is both ugly and counterproductive. There are a lot of people who are pissed off, they’re tired of being talked to like that. There are a lot of people in this world who, when an Applebee’s moves to their town, it’s a big deal—and I don’t mean that in a dismissive way. Where somebody coming to take your guns away is a big concern. Look, I don’t think racism can ever be forgiven. It’s a conversation-ender for me, for sure. But if you grew up isolated, no interaction or little interaction, the only interaction you’ve had has been negative, and you’re fearful of the Other, and somehow everything you read in the paper makes it seem like they’re getting all the breaks, especially when, in the news environment we live in now, it’s perfectly permissible to lie.

“Anthony Bourdain: I put aside my psychotic rage, after many years being awful to cooks,” John Hind, Observer Food Monthly

The great Warren Zevon was asked, close to death, whether he had any important words of wisdom to pass on and he said, “Enjoy every sandwich.” I definitely enjoy my sandwiches, given how low I fell and how likely it was that there was going to be a different and tragic outcome. I’m a pretty lucky man. I enjoy my food and presenting Parts Unknown. I have the best job in the world.

And a few more good remembrances from the past few days:

“Anthony Bourdain Was the Kind of ‘Bad Boy’ We Need More Of,” Sarah J. Jackson in The New York Times

His work represented a beautiful merging of love of food with an earnest effort to listen to others, especially marginalized people. After he visited Gaza, he openly criticized what he saw as the dehumanizing representation of Palestinians in the media, and proclaimed that the world was “robbing them of their basic humanity.”

We live in a time when the simplest protests against racial injustice by athletes and celebrities are considered divisive, and when admitting imperfection while striving for righteousness and truth makes you a rebel. Perhaps that partly explains why people called the curious and empathetic Mr. Bourdain a “bad boy.” If that’s the case, let’s have more like him. May his compassion and indignation live on.

Bourdain’s brashness came with an immense humility that really made up the warp and weft of his TV shows. There’s a long tradition of Western travelers passing sweeping, self-aggrandizing judgments on the rest of the world, and he wanted no part of it.

After learning of his death, I recalled a scene from the Democratic Republic of Congo episode of Parts Unknown, in which Bourdain takes a perilous boat trip down the Congo River. I say perilous not because it was unsafe, but because it threatened to teeter into a dangerously overwrought evocation of Joseph Conrad’s Heart of Darkness: the inscrutable jungle-clad shoreline, the muddy expanse of the river, a white man alone on the prow of the boat as it puttered into the depths of the dark continent. Thankfully, the “horror” he discovers on that voyage lies not in the jungles or in the fallen hearts of men, but in the kitchen.

He wrestles with disaster in trying to make coq au vin for his crew on the boat. The chickens prove tough and scrawny and rather gruesome to kill. Then the single knife onboard is so dull that dismembering and cleaning the carcasses takes up the remaining daylight hours. The boat’s generator fails, plunging the increasingly frantic prep into darkness. “I can’t cut what I can’t see,” Bourdain exclaims. When light does return, it attracts hordes of insects, and the New York chef must finish making dinner with moths swarming around the beam of his headlamp. Finally, a sweating and haggard Bourdain trudges to the table with his cauldron of stew. In a show built on rhapsodies of food, the appreciation for his nightmarish toil is notably muted. A colleague shrugs and offers Bourdain the barest compliment: “Tastes like chicken, man.”

“Anthony Bourdain Was a Great Crime Novelist, Too,” Sarah Weinman in Vulture

Most people will pay tribute to Anthony Bourdain as a chef, as the author of Kitchen Confidential, and as the host of several food and travel shows, most recently Parts Unknown on CNN. They will say, and already have said, that they looked up to him as a rebel, a truth-teller, a man willing to own up to his mistakes and make changes, to listen to those in pain. These are certainly all of the things I think about with respect to Bourdain, who died early Friday morning in Strasbourg, France, at age 61.

What may be less appreciated, but is what I keep returning to, is his crime fiction. As his celebrity grew in stature, as he transformed from line cook to chef at Les Halles and further high-grade Manhattan restaurants to charismatic television star, I kept hoping, foolishly perhaps, that Bourdain might return to his first writing love, to the books he wrote and published when his audience was smaller, but still devoted. 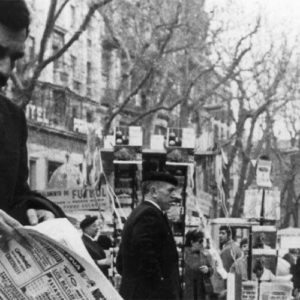 It wasn’t until a year after moving into my Barcelona apartment that I learned Gabriel García Márquez once lived here...
© LitHub
Back to top