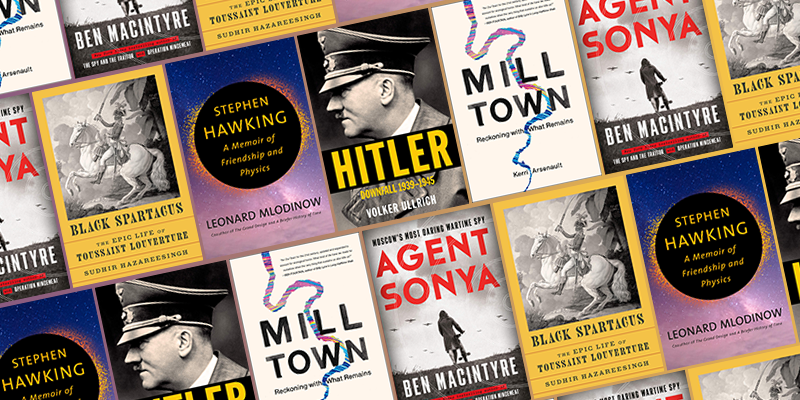 “For stretches, it is pure memoir—and first-rate memoir at that. Arsenault’s accounts of her life, both in Mexico and in her years away, are mesmerizing. Evoking that particular flavor of small-town Maine life is difficult to do with any sort of verisimilitude; even those who have lived it can’t always manage. Arsenault has no such problem, crafting a portrait that is fiercely proud and beautiful, peeling paint and all. In other places, the book is a compelling and taut work of industrial investigation. Arsenault is meticulous in her research, ultimately building a warts-and-all look at the history of the mill. Good, bad and ugly are presented, all of it with receipts … Arsenault’s narrative moves with steady relentlessness, pressing ever forward. There’s a sense of constant motion to the prose, even as it relates to the relative stagnation of the place itself … Mill Town is haunting and heartbreaking, charming and funny … and utterly exceptional.”

“We have at last, in Ben Macintyre’s Agent Sonya, the tale of a fully fleshed-out female spy. Not a femme fatale with a tiny pistol in her purse … a real-life heroine worthy of his gifts as John le Carré’s nonfiction counterpart … It boggles the mind how a woman with so many domestic responsibilities—a husband and two children—could find time for spy drops and transmitting coded messages. But Sonya was the consummate multitasker, now cooking dinner, now cooking up explosives to blow up railways. Domesticity was the perfect cover … The flat-footedness and sexism of the British secret services is one of Macintyre’s entertaining subplots … Macintyre gives an enthralling account of the territory that exists between devotion to the cause and sheer love of the game. But hovering over this tale is a question that Macintyre deals with only in passing … Sonya excused brutalities far too lightly, and never disavowed the faith. She sacrificed everything—family, friends and morality—for a dream built on lies.” 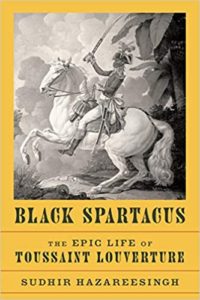 “… a tour de force: by far the most complete, authoritative and persuasive biography of Toussaint that we are likely to have for a long time. It is not without its own very strong point of view, presenting Toussaint above all as a fierce and effective opponent of slavery. But it is at times an extraordinarily gripping read … The book is grounded in a remarkable job of research. Hazareesingh has scoured archives in France, Britain, the US and Spain (not Haiti itself, where, regrettably, relatively little material has survived). He has not been able to resolve some of the greatest open questions about Toussaint, such as whether the black leader plotted the slave rebellion at the behest of French royalists, who hoped it would undercut moves towards independence by white landowners. Rumours to this effect have circulated since the events themselves. Hazareesingh does not believe them, but has little new evidence. However thanks above all to new soundings in the French colonial archives, including both the correspondence of French officials and records of the colonial administration, he has provided a far richer portrait of Toussaint’s years in power than was previously available. Ten of 12 chapters deal with these later years … [Hazareesingh’s] admiration does lead him to skate lightly over the most troubling aspects of Toussaint’s career.”

–David A. Bell (The Guardian)

4. Stephen Hawking: A Memoir of Friendship and Physics by Leonard Mlodinow
(Pantheon)

“… highly enjoyable … What is refreshing is the absence of the usual adulation of an exceptional mind and celebration of triumph over adversity. In their place is a tender account, full of genuine affection, which doesn’t shy away from Hawking’s intense focus, self-centredness, unpredictability and the difficulties faced by his wives and carer … For those who have followed Hawking’s career there is a retelling of well-known stories … That Hawking was famous for his courage, his stubbornness and his sense of mischief is not new. But we don’t often hear about his vulnerability … These stories, told with humour and fondness, mean that I feel I now know Hawking a little better. I still don’t fully understand his theory of black hole radiation, but I won’t go into that now.”

“… meticulous … For some readers, Ullrich’s portrait of Hitler may be difficult to take, since we are so used to seeing him as inhuman, even subhuman, a madman or a beast. Even Sir Ian Kershaw, whose two-volume biography represents the gold standard in 20th-century history, saw Hitler as a ‘non-person’, a lazy, talentless mediocrity onto whom people projected their hopes and anxieties … But Ullrich argues that Hitler was all too human. And although his second volume covers almost exactly the same period as Kershaw’s second book—the Second World War—the focus is quite different. Kershaw’s real interest lay in the Nazi dictatorship. Ullrich is more interested in Hitler the man … [Ullrich] is also excellent on the dictator’s health and appearance … Some of this, of course, is very familiar: the rages, the Stauffenberg bomb plot, the final scenes in the bunker. So if you know the story, do you need to bother? … The answer is yes. Smoothly written and splendidly translated, Ullrich’s book gives us a Hitler we have not seen before, at once cold-blooded and idealistic, chillingly narcissistic and cloyingly sentimental. And precisely because he seems so much like the rest of us, it is probably the most disturbing portrait of Hitler I have ever read.” 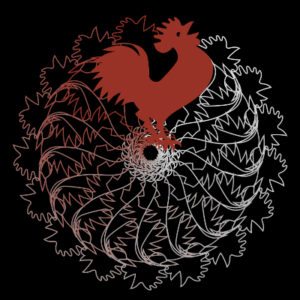 On today's episode of So Many Damn Books, Christopher and Drew discuss the advent of the Tournament of Books and all that...
© LitHub
Back to top
Loading Comments...