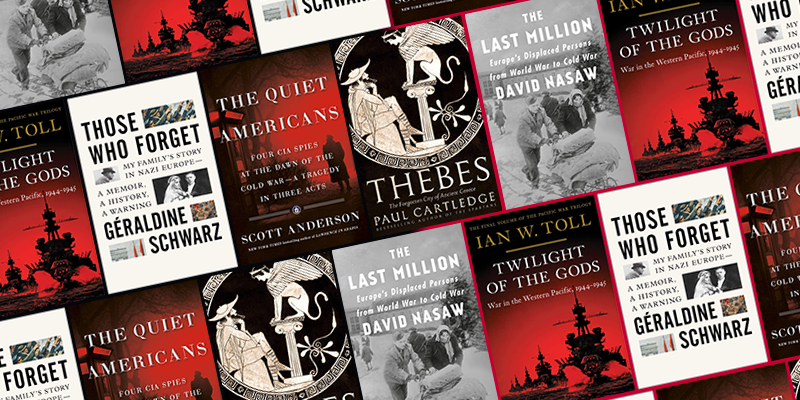 Chronicles of Europe's Displaced, the War in the Pacific, the Early Years of the CIA, and More

David Nasaw’s The Last Million, Ian W. Toll’s Twilight of the Gods, Geraldine Schwarz’s Those Who Forget, Scott Anderson’s The Quiet Americans, and Paul Cartledge’s Thebes all feature among the best reviewed history and politics titles of the month. Brought to you by Book Marks, Lit Hub’s “Rotten Tomatoes for books.”

6 Raves
Read an excerpt from The Last Million here

“One of the many virtues of The Last Million is the author’s ability to make vivid sense of a bewildering moment. He clarifies without oversimplifying … Nasaw demonstrates throughout an especially supple sense of scale. Much of what makes the book so absorbing and ultimately wrenching is his capacity to maneuver with skill between the nitty-grittiest of diplomatic (and congressional, military, personal) details and the so-called Big Picture. In cinematic terms, he’s adroit at surveying a vast landscape with a soaring crane shot, then zooming in sharply for a close-up of a single face as it crumples … Among the longest festering of those crises is, of course, Palestine/Israel’s. Nasaw handles deftly the international aspects of this part of the story, in which the fate of that small, troubled piece of land became a ball kicked between England and the United States … The author’s account of the facts on the ground in Palestine/Israel produces the book’s only slight wobble—an uncharacteristic loss of perspective … But these amount to very small quibbles, and The Last Million is greater than they are. Nasaw takes pains to avoid facile comparisons between the history he recounts and the current global moment, with its—our—own seas of refugees. As his calmly passionate book makes plain, however, one would need to be willfully covering one’s eyes not to see how then bleeds into now.”

“Toll skillfully shifts his narrative focus throughout all of this from the broad-scale operational side of things to the personal and even anecdotal … Naturally, the book’s tragic, dramatic high point deals with the main reason for that abrupt surrender: the atomic bombing of Hiroshima and Nagasaki. Toll narrates this gruesomely familiar part of his story with the solemnity of a modern-day morality play; every detail is familiar from earlier accounts, but he imbues them a very readable austerity, as when he’s dealing with the bomb that was dropped on Hiroshima … the title’s meaning is a bit of a mystery to me … traffics in such familiar narratives throughout its length, always guided by Toll’s spare eloquence and obvious mastery of his vast array of source materials. The Pacific Theater has had entire libraries of histories written about it over the last seven decades (with many, many more such histories to come, since 2021 marks a nice clean 80 year anniversary of its beginning), and Toll has written a trilogy fit to stand with some of the best of them.”

3. Those Who Forget: My Family’s Story in Nazi Europe—A Memoir, a History, a Warning by Géraldine Schwarz
(Scribner)

“… [a] riveting exploration of Germany’s post-World War II reckoning with guilt and responsibility … Ms. Schwarz makes a strong case that without the support of Nazis like her paternal grandparents, ‘Germany could not have descended so far into chaos and crime.’ She is equally persuasive in her thesis that it is only through the hard work of remembering the past, with equal parts historical accuracy and personal courage, that we can begin to heal from the hurt and residual distrust we lean on to rationalize prejudice and hatred of others. With eloquence and passion she demonstrates that we can never be reminded too often to never forget.”

4. The Quiet Americans: Four CIA Spies at the Dawn of the Cold War—A Tragedy in Three Acts by Scott Anderson
(Doubleday)

“… enthralling … takes its title from Greene’s classic—and shares much of its disillusionment … Lying and stealing and invading, it should be said, make for captivating reading, especially in the hands of a storyteller as skilled as Anderson. All the characters of The Quiet Americans could have stepped from a film set—and some of them actually had … for all their ill-advised or bungled covert ops—which included coups from Tehran to Guatemala City—it is impossible not to be a little swept up in the spectacle of this bygone era when intrepid individuals actually shaped history, even if it was often for the worse … Some of the people in this book will be familiar to students of C.I.A. and Cold War history. The story of Wisner, the head of the early intelligence apparatus’s covert action arm, has been well told many times before. Anderson is at his best, however, when he plows fresh ground … Anderson’s book is a period piece, covering the years 1944 to 1956—but the climate of fear and intolerance that it describes in Washington also feels uncomfortably timely … Anderson’s critique raises the question: If not Eisenhower’s particular brand of containment, then what? Most of the time the book leaves this unanswered … Greene liked to quote Chekhov’s aphorism that a writer is ‘not a confectioner, not a cosmetician, not an entertainer.’ Anderson’s narrative is certainly entertaining, but he is no confectioner, and the dark, poignant tale he tells is far the better for it.”

“Mr. Cartledge’s command of the historical material is effortless and exhaustive, and his appreciation of Thebes is persuasive. Between the radical but self-destructive democracy of Athens and Sparta’s totalitarian oligarchy (both imperialist), Thebes and Boeotia stand in the middle as an early model of democratic federalism … It was Thebes that dealt a critical blow to Spartan domination, and a Theban leader who freed a long-enslaved people. Alexander the Great himself adopted military tactics from Epaminondas. If Thebes’s period of hegemony was brief—barely a decade—it also changed the course of the ancient world.” 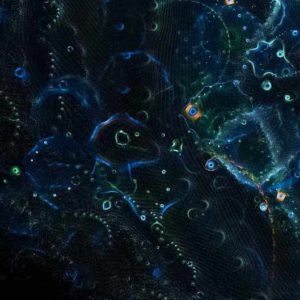 Our current pandemic is not a first excursion into remote learning. Many may know of the origins story of calculus, born...
© LitHub
Back to top
Loading Comments...