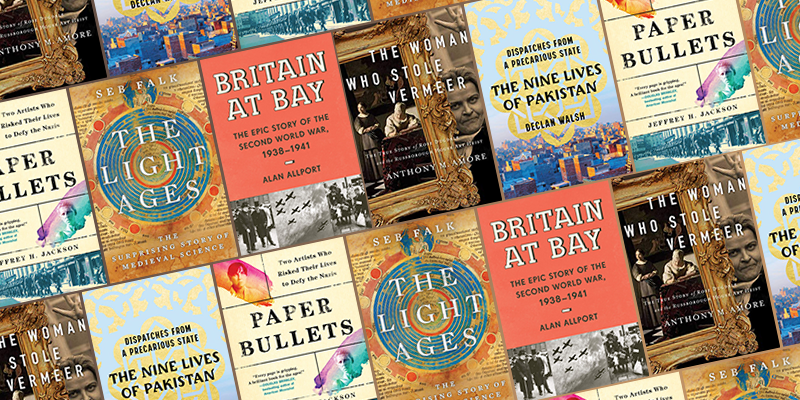 1. The Woman Who Stole Vermeer: The True Story of Rose Dugdale and the Russborough House Art Heist by Anthony M. Amore
(Pegasus Crime)

“Rich in tantalizing details, The Woman Who Stole Vermeer is filled with personal anecdotes from those who knew Dugdale the best—old college friends, colleagues and political compatriots who all remember her as wholly original and completely fearless … In striking detail, Amore describes how Dugdale was identified as the one who orchestrated the heist. Her subsequent arrest, theatrical trial and most dramatic crimes are also vividly explained. This exciting biography of a singular woman is for anyone who loves true crime, art, politics and history.”

Read an excerpt from The Nine Lives of Pakistan here

“The question has confounded many: How does Pakistan stay alive? … The New York Timesforeign correspondent Declan Walsh is the latest to try to answer that question. In his new book, The Nine Lives of Pakistan: Dispatches From a Precarious State, he pulls from years of contact with sources on the ground, presenting nine narratives—each given its own chapter—to paint a vivid, complex portrait of a country at a crossroads … Walsh’s writing is elegant and expressive. It does what the best foreign correspondence should: transport the reader … Every character is fighting on his or her own front line in some way … Walsh beautifully braids in brief history lessons, placing each voice in proper context and feeding a richer understanding for readers coming to the region fresh.”

“… a fresh look at World War II resistance … Drawing on archival and genealogical sources, the women’s own writings, and histories of the period, Jackson creates a vivid picture of the tense, fearsome atmosphere of Jersey under Nazi occupation and the perils of resistance … A unique WWII history and absorbing story of two bold, unconventional women.”

“… magnificent … a spell of seven finely crafted chapters … a prodigiously detailed ode to the medieval (and, it turns out, very modern) impulse ‘to tinker, to redesign, to incrementally improve or upgrade technology.’ By the end of Mr. Falk’s book, even previously indifferent readers will, I promise, never want to use ‘medieval’ as a slur word again … Medieval instruments are feats of technological ingenuity, and the reader is grateful when Mr. Falk emerges from the thicket of technical details to administer an encouraging pat on the shoulder … it occurred to me that Mr. Falk’s The Light Agesis written in similar fashion, though as a friendly invitation, not as a decree—as if John Westwyk and Seb Falk, separated in time but not in spirit, were joining hands while guiding us along; or as if The Light Ageswere Mr. Falk’s own clever astrolabe, seeking to make that shimmering light in the distance look, as well it should, wonderfully close and luminously real.”

“… demonstrate[s] well what we can learn and need to relearn about Britain’s People’s War … brave and bold arguments and nuance through thick description … [Allport] moves with ease, wit and insight between the high political and diplomatic, the social and economic, the strategic and military, with biographical vignettes and anecdotes illustrating the lived experience of ordinary people. That it is an epic story there is no doubt. But the twist is that it is a tale of national decline on an epic scale … imaginatively de-familiarizes national myths … Allport’s exposé of the private Chamberlain as insufferable, vain, a dreadful judge of character, and an appalling negotiator is balanced by a surprisingly judicious assessment of his foreign policy … Students of history will be grateful for it as a reference work and treasure trove for many years to come. Covering those traumatic months when civilians were under Nazi fire, the Home Intelligence Reports are a much needed reminder of the drama and diversity of experience, as well as of the quotidian, the petty, and the mundane … I, for one, can hardly wait for the sequel.” 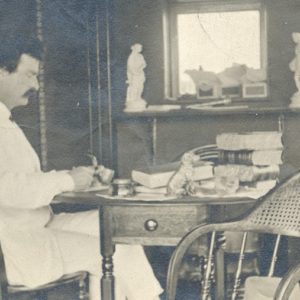 Susan Crane’s china isn’t at Quarry Farm anymore. Or at least I can’t find it. I’m rummaging through every cupboard,...
© LitHub
Back to top
Loading Comments...