The Bell in the Lake 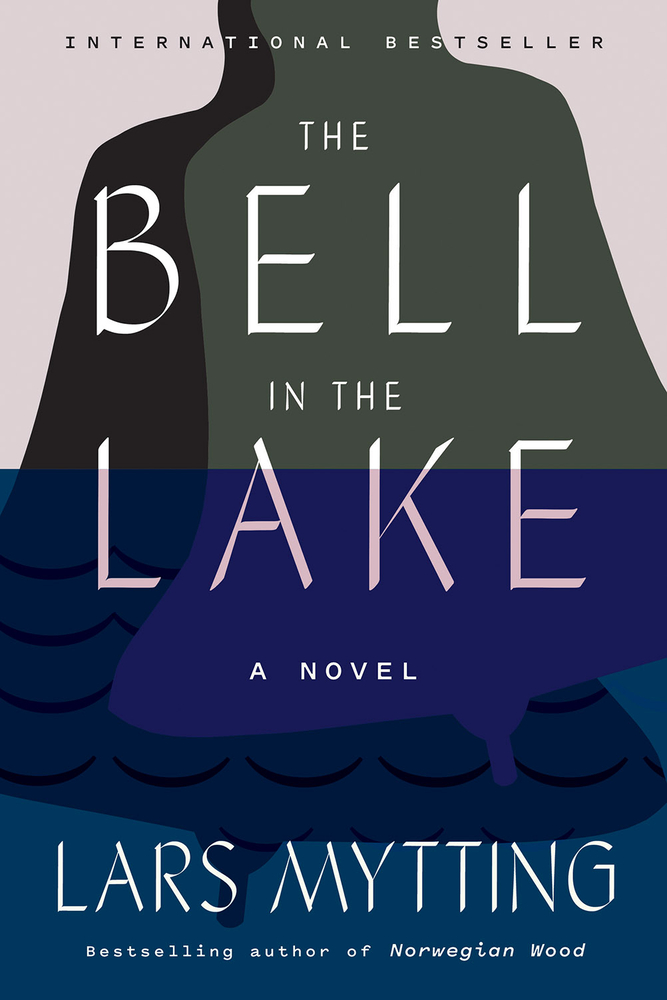 The following is excerpted from Lars Mytting's latest novel The Bell in the Lake, an epic novel of a young woman whose fate unravels against her village's mystical church bells. Mytting is Norway's bestselling novelist and the author of Norwegian Wood. His books, which have sold over 1 million copies in 19 languages, have won the Norwegian Bookseller Prize and have been shortlisted for the prestigious Dublin IMPAC Prize, among others. The Bell in the Lake was a No. 1 bestseller in Norway.

For centuries the Sister Bells rang out across the village. They rang for the living, the dying and the dead, for marriages and Christmas Mass, for baptisms and confirmations, and sometimes for forest fires, floods and landslides. Folk rarely moved to or away from the village, those who did leave never came back, and many children believed that all church bells must sound like the Sister Bells, just as those who live near a magnificent view take it for granted.

The bells hung safely in the tower until 1880, when they and the village were the subject of sudden changes and unbending wills. One of the bells would even finish up under water and be hauled up again, and the only person who would have any power over their fate was a young girl of Hekne lineage. Her sacrifice was no less than that made by the Hekne parents centuries ago, but hers had to be made in secret, and for some time only one man would remember her for it. Those who might have wanted to remember would have found it hard to understand her actions without knowing the story of the stave church and the village she called home.

The Hekne farmstead was in Butangen, in a side valley between Fåvang and Tretten in Gudbrandsdalen. About a thousand souls lived in the village at the time, divided among some forty farmsteads and the crofts they controlled. The place name itself had a long story attached, not that it was often told, with so few visitors to tell. The village had got its name from an area on the shore of Lake Løsnes, a very long stretch of deep water, lined with dense forest and huge boulders, which offered only a small headland—a tangen—flat enough for a bu—a shack. It was here that early settlers built their boathouses and moorings, calling it Butangen. Nobody ever set up home here, but since it gave vital access to the main cart-road on the other side of the lake, by boat in the summer and sledge in the winter, the whole village was named after it. The church itself was built higher up the side of the valley, partly for the view, but also because the villagers knew from Fåvang what a flood could do to a cemetery.

All along the valley, families clung to the patches of land their forefathers had claimed. Some farms were built on such precipitously steep, rocky land, that even after three generations they only managed to clear three small fields. But, by way of compensation, the piles of rocks found new life as stone walls, so high that not a single sheep was ever taken by wolves in Butangen.

Change came slowly. The village was twenty years behind its neighbouring villages, which were thirty years behind Norway’s towns and cities, which were fifty years behind the rest of Europe. In part this was due to the journey there. The curious, if they existed, had to head north along the winding River Laugen, and then, at Fåvang church—if they could find it and were still determined in their quest—they had to go up the valley side and follow a narrow mountain pass near Okshol farmstead. From there the trail crossed a rocky terrain and disappeared from view. Here many turned left and found themselves in the barren and uninhabited Okshol Valley. Only if they turned right did Butangen come into fine view, with its church high on the slope and farmsteads around it. But then, looking down, they would see the deep waters of Lake Løsnes and the treacherous marshes. Most turned back here, and the rest gave up when, having failed to find the trail, they stood knee-deep in marshland with the night closing in, being devoured by mosquitoes so that their skin looked more like an animal pelt.

A few did make it round the lake, or were lucky enough to get a boat ride from some dour villager who had put out his nets. When they finally arrived, they would either get married or be stabbed to death. A slight exaggeration, of course—Butangen was, in fact, a good place to live. The River Breia which carved this valley out was fed by many streams that supplied the farms with water. There was a bashfulness about the landscape, as the countless sharp twists in the river and streams created an eternal shift between lush sunny banks and mysterious shadowy slopes, before the river made one final, abrupt turn and spilled out into Lake Løsnes. Despite its steep inclines, it was a pretty, sun-drenched little valley, and on walking further you could enjoy a little social interaction with the locals, with a nod and a wave from afar.

Transport was slightly easier during the winter. When Lake Løsnes froze over, you could just speed across the ice and marshes, and then take the cart-road downhill to Fåvang. Thus village life followed a six-monthly rhythm. Winter was the time to visit others, to arrange marriages, to trade ploughshares and gunpowder. Some villagers longed to be some place else, but those who had been to this “some place else” could confirm that folk there did the same things, maybe a tad differently, but not in a way that was superior. There was no prospect of anything but drudgery, and drudgery could be found just as well at home, where it was borne among relatives and familiar faces.

The valley folk lived out their lives within their stone walls, in a slow and steady dance with the seasons.

Strangers and foreigners never got to pour their more exuberant genes into the Gudbrandsdøls’ pot here in these valleys, as they did along the coast—where the dour character of the locals was diluted by shipwrecked Mediterranean sailors, who, when they waved farewell at their emergency harbour, left little gifts in the girls’ bellies, gifts that sprang out as fiery-tempered kids with jet-black hair. The valley folk lived out their lives within their stone walls, in a slow and steady dance with the seasons. Each farm was a self-sufficient kingdom, and the valley sides were like ramparts separating them from the outside world. The tall barrier of pine trees strengthened their belief that it was better to collect moss in the old way until they dropped dead, than to change the direction of their lives. They were content to spend days at a time in the mountains, and to toil in the sleet and rain, and they preferred shovelling snow to digging the clod because it was lighter work, and the grand folk and humbler folk never mixed, generation after generation kept to the same farms. Time was irrelevant; they carried on the work that others had died doing, which they knew an unborn child would continue, and with the use of the same skills and often the same carts the ancient piles of rocks grew larger. And all these things bore upon how they spoke and behaved, even upon their sensing and feeling.

When Christianity came to Norway, the Butangen folk built an elaborate stave church, a masterpiece in ore-pine, with ornate carvings, dragon heads and a proud spire. Since everybody had enough food and no notion of time, months and years could be devoted to the most painstaking work in wood and stone. The church was completed during the reign of King Magnus V, and the year 1170 was carved into the foundation log. The staves and framework were made from the giant pines that grew in Gudbrandsdal back then, and, as was the custom in Norway, Butangen church was richly decorated with motifs from the ancient pagan faith. It became a kind of Viking chieftain’s hall with a veneer of Christianity, and the woodcarvers spent long summers decorating it with serpents and other familiar ornaments from the Norse times. The exterior of the weapons porch was adorned with long-necked lions, and a gigantic carved serpent curled itself around the main door. On either side of the altar were wooden staves decorated with bearded faces, ancient gods with fearsome eyes and no pupils. All offering protection against the terrible powers that the Norsemen had battled against for centuries. The carpenters worked very hard to please all the gods, just in case Odin and Tor were still active.

In the centuries that followed the church was neither altered nor plundered. Just as the villagers’ character avoided dilution by strangers, so this hidden medieval masterpiece remained untouched by fads or fashion. The decorations were not wiped away when the Reformation stripped God’s houses bare, and Pietism never set its claws into the furniture and fixtures. The eight dragon heads continued to snarl towards the sky, and the outer walkway and walls released the fragrance of centuries of thorough tarring.

The story of the church bells and the Hekne sisters was barely known beyond the village. Once, in the early 1800s, an artist had come to the village and made drawings of the church, but he made little impression. Soon afterwards there had been another visitor—probably unconnected to the artist—who seemed to have some hidden agenda, and who quizzed a villager about the story of the Sister Bells, but he too was never heard of again, and soon nobody was sure whether either man had been there at all.

The small windowpanes still cast their delicate light over the church pews, but they grew loose and let the north wind blow straight in on the Eucharist.

Churches no longer got financial support for their maintenance, it had stopped long ago when Catholicism was replaced by Protestantism. Utterly reliant now on what their own parish could raise, God’s houses soon became a measure of good times and bad. Gudbrandsdal was a severely impoverished district throughout this century, plagued by overpopulation, flooding, frost-ravaged harvests, alcoholism and potato blight. The small windowpanes still cast their delicate light over the church pews, but they grew loose and let the north wind blow straight in on the Eucharist.The wooden roof tiles started to warp, and the rain seeped into cracks that became increasingly difficult to find. The only items able to withstand the elements were the two church bells. All around them the decay continued. Water constantly sought new pathways in the intricate framework of beams, and when it froze the ice swelled and widened the cracks, and dry snow came in through the gaps. Over the next few decades the dragon heads were taken by the wind and rain, one by one they fell to the ground, jaws snapping helplessly between gravestones, and the whole church seemed to slump a little without them, as though it looked with dread upon dark times ahead.

Ahem: Here is a poem about J.J. Abrams making a Dr. Seuss movie. 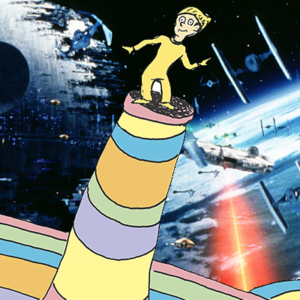 Ahem: Here is a poem about J.J. Abrams making a Dr. Seuss movie. Congratulations! Today is your day! You're off to great places! Like a galaxy far, far away! J.J. Abrams of Star Wars...
© LitHub
Back to top