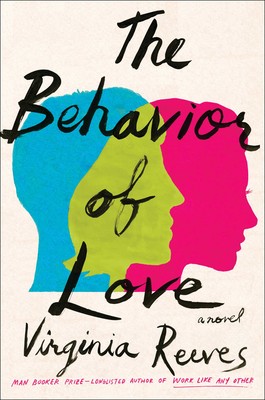 The following is from The Behavior of Love by Virginia Reeves. Ed, a psychiatrist, finds his perfect married life disrupted by Penelope, a charming, beautiful epileptic who should not be in the hospital where he works. Virginia Reeves' novel Work Like Any Other was longlisted for the Man Booker Prize and the Center for Fiction’s First Novel Prize. She lives with her husband and daughters in Montana, where she teaches writing and speech at Helena College.

I’ve taken a job at a little clothing store downtown. Just a couple of day shifts during the week. If the art class at Ed’s institution actually happens, I can easily work around it.

He doesn’t know I’m working, and I see no reason to tell him. He would see it as lowly, as he did my job at Sally’s back home, and I don’t want to have to defend what I love about working in a shop. I tried to explain it for two full years, and he never saw my work as anything more than a waste of time. “We don’t need the money,” he’d argue. “You should be home painting.”

I tried to tell him it was about the people—something he should’ve understood—but he still saw those people as beneath me. Or else he saw me as beneath them. “It’s not like you’re friends with the customers, Laura. They see you as a glorified servant.”

When he sold me on his new job in this place, he used the money as another bargaining chip: “You won’t have to work.” He said it again and again, as though work was the hardest part of my life.

He is too prideful for jobs in the service industry, and I suppose I’m too prideful to sit at home painting all day. I haven’t earned that life yet, and I am used to working. My mother worked through the beginning of her illness, and when both my parents were sick, they insisted it was a lesson for me in resilience and strength. “You’ll provide for yourself, Laura,” my father said. “Above all else.” He died a year after my mother. I was sixteen.

Plus, it’s lonely there, alone in that house.

I’ve opened my own checking account so Ed won’t question the deposits. The money sits there untouched, waiting for something. The owner of the shop is an ex-dancer named Miranda. Rows of bangles on her wrists announce her movements, and she is always layered in scarves, even in the summer. She has little in common with Sally back in Michigan, but she reminds me of her all the same. The air of prestige that all clothing store owners seem to share. The insistence on quality and aesthetics.

They have different styles but the same expectations.

I bought one dress here before I took the job—a pale yellow shift to wear to dinner on Ed’s and my anniversary. “You have good taste,” Miranda said when I brought the dress to the counter, and then after just a few minutes of conversation: “Would you like to work here?”

I am often the recipient of random gifts and favors from strangers. Sally’s offer came in a similar manner. I think I must wear my dead parents on my face, something forlorn and lost. I usually say no to the gifts and favors, but I take the job offers.

Miranda’s store is downtown on Last Chance Gulch, a street I didn’t believe existed until I saw the signs myself. This was a miners’ town, the last chance for many. Old kilns still hunker in the hills, shafts and tailings. I’m trying to paint these scenes, but they feel flat and contrived, as though the paint knows I’m a stranger.

The shop is familiar, at least.

The bell over the door chimes, and I look up to see a young man in this women’s clothing shop. He looks confused.

“May I help you?” I ask. The pub is three doors down, I imagine I’ll say. The sporting goods store is two blocks up, one over. He is handsome, with giant brown eyes, a couple days’ stubble, shaggy hair. Ed keeps everything tidy—hair and beard and body—and I’ve made myself forget that I once liked the stink and sloppiness of other men.

Sally taught me the questions to ask of customers, a different set for men than for women.

“What was her favorite color?”

“That’s mine, too,” though I prefer yellow. “Do you know her size?”

He shakes his head, terrified.

“Do you know how tall she is? About how much she weighs?”

“Five-two. Barely a hundred pounds. She was tiny,” he says, holding a hand just below his shoulder. “Tiny.”

I’m familiar with tiny dead mothers. Mine didn’t have a casket. I lead him to a rack of blue dresses halfway between matronly and sexy. I want his mother to be this way—laced around the edges yet slinky about the hips.

I get him panty hose and apologize that we don’t carry shoes. “They said her feet won’t show.” The feet are so important. How can we disregard them in death?

The shop feels cold, though the spring sun shines warm outside.

I wrap this dead mother’s items in tissue paper and slide them gently into a bag.

I shake my head in refusal, and he lingers for a moment.

He thanks me quietly, a formality his mother likely taught him.

When someone offers to pay, try to protest, but give in easy. Then the bell over the door is ringing, and he is gone.

I add up the purchase and circle the total on the receipt, write my name at the top. I get a twenty-five percent discount, and Miranda will take the money out of my next check. Buying a dead mother’s dress is a good use of the income I’m making here, and I imagine telling Ed how meaningful the job can be. I helped a man pick out his mother’s burial dress today, I would say. And I bought it for him. I made one piece of this painful moment in his life more bearable. I’d like to tell Ed. But I won’t.

A week later, the same man comes in. He’s cleaned himself up, and the confusion is gone from his face. I’m hanging new earrings on a rack. “Hello again.”

“Oh, good,” he says. “You’re working.” He walks straight to me, and I am suddenly nervous. His handsomeness is more pronounced today, and I can smell his aftershave, good and wholesome.

“I wanted to thank you for your help.” He hands me an envelope and then holds out his hand. “I’m Tim.”

His hand is rough and callused, like that of my old boyfriend Danny, the firefighter Ed stole me from. Kind and strong, doting and a bit dumb, Danny was no match for Ed’s intellect and humor, his bravado and voice. Ed sang to me the first night we met, jumped onto the stage of the bar to sing with the band, to me. Poor Danny was gone in less than a week.

But I miss his hands sometimes.

“All right,” he says, then shakes his head. “I’m surprised how unprepared we were, you know? I mean, she was sick for a long time. We knew she was dying. But then when she actually died—we didn’t know what to do.” He starts playing with a pair of earrings. “Sorry. That was probably a rhetorical question. I can’t answer those anymore, all the idle chatter and the how are yous. I actually answer now.”

“That’s probably good,” I say, remembering the same honesty after my parents died, my inability to smile and say, I’m fine. Thank you. Sometimes I wish it’d stayed. “Your bullshitting skills will come back soon enough,” I tell him. “Appreciate the honesty while you have it.”

He looks ready to ask me how I know, and I am ready to tell him, but the door chimes and an older woman walks in.

I watch him walk out, and I welcome my new customer. She needs a gift for her granddaughter, and we walk together through the store. I show her sweaters and necklaces and scarves. A pale pink taffeta skirt. A peasant blouse. But I am thinking about Tim’s face and hands and honesty. 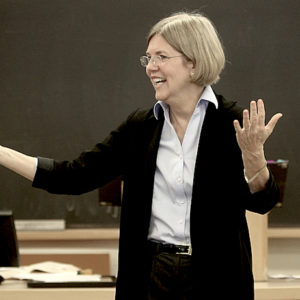 Rebecca Solnit: How Internet Insinuation Becomes Campaign Fact The Internet is a costume party in which everyone comes dressed in an opinion, or rather dozens of them or an endless array,...
© LitHub
Back to top